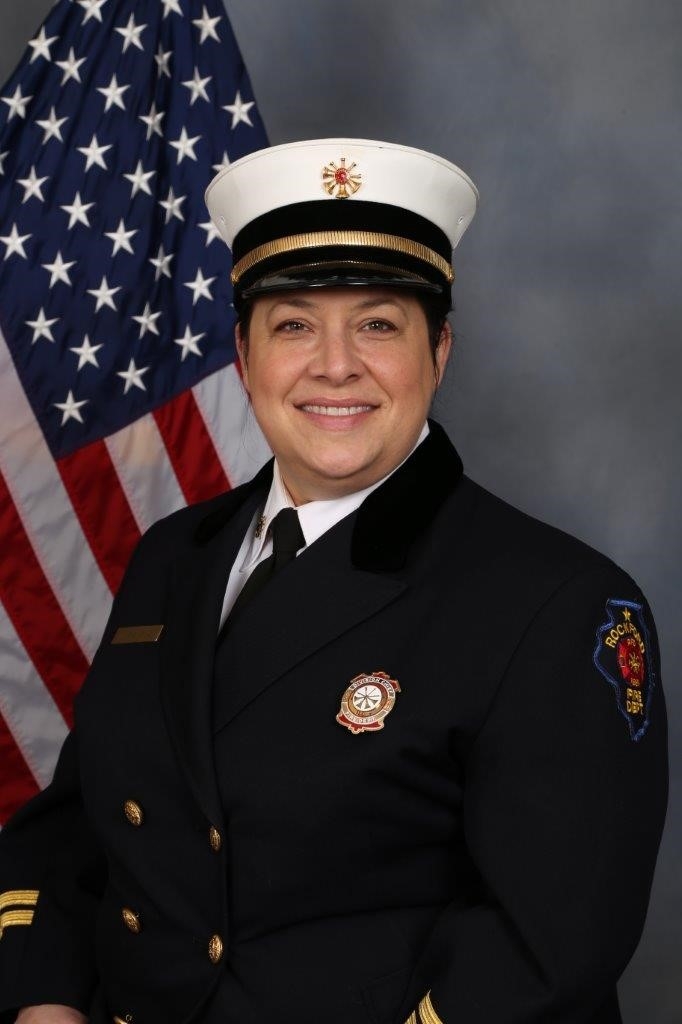 Chief Michele Pankow has worked at the Rockford Fire Department for 28 years. As the Division Chief of Operations, she is responsible for all operations of the Rockford Fire Department. In addition to her daily work at the fire department, Michele is also the Emergency Services Disaster Coordinator for the City of Rockford. In this role, she helps to support the city during disaster, whether it be civil unrest, a tornado or even a pandemic.

In March 2020, Michele and her team opened the Emergency Operations Center to assist with needs in the City of Rockford during the COVID-19 pandemic. She assisted with getting kids meals after schools went remote, gathered PPE for agencies in the area, and is currently assisting local COVID-19 vaccination sites. Michele has also worked alongside the Red Cross in her years with the fire department and the City of Rockford, during home fires and disaster operations, such as the 2019 floods.

Outside of her career, Michele mentors high school girls in the Rockford School District through the Young Women’s Leadership program. This program is a local organization that pairs women in the workplace with female students to show them a variety of jobs and career paths. Michele hopes her passion for her job inspires the next generation of females in the workplace, and she wants women to know they can do anything.

After joining the Rockford Police Department, Sergeant Joseph Danforth saw first-hand the effects of gang violence in his community. Joe wanted to do something beyond his police work to address the lack of outreach activities on the west side, to help kids stay active and off the streets.

Noticing that basketball was a great way to keep his own sons out of trouble, Joe started the Rockford Five-0 basketball training program in 2005. The program aims to give kids a better chance at a college education and college athletic scholarships. What started as a small effort has grown to include numerous volunteers and over 300 kids who have participated in his organization since its inception.The majority of the kids enter the Rockford Five-0 family in the third or fourth grade and usually remain throughout high school. However, the organization likes to say that once you enter the family, you never truly leave.

Rockford Five-0 has helped numerous kids get college basketball scholarships, including notable alum, Fred VanVleet, Joe’s son, who currently plays for the Toronto Raptors. While mentoring kids over the years, Joe and his coaches have taught that basketball alone is not enough. Joe stresses the importance of being a good student, as well as a good person. He says his success would not be possible without his wife, Sue Danforth, as she has been just as committed to the organization as he and his coaches have been.

Your support will help us deliver our mission where the need is greatest. Thank you to our generous matching gift sponsors: Better, Fran & John Edwardson, and Susan & Nick Noyes.

The American Red Cross shelters, feeds and provides emotional support to victims of disasters; supplies about 40 percent of the nation's blood; teaches skills that save lives; provides international humanitarian aid; and supports military members and their families.

Your support makes the lifesaving mission of the Red Cross possible.