Since 1999, the American Red Cross of Central New York has celebrated the Red Cross mission of alleviating human suffering by hosting the Real Heroes Breakfast to honor Central New Yorkers who have performed heroic acts to help others in need. The 21st Annual breakfast will be held on the first Wednesday of December at the Oncenter in Syracuse and regularly attracts hundreds to the downtown area.

The Red Cross touches lives in our state every day through programs and services such as Disaster Relief; Service to the Armed Forces; and Preparedness and Health & Safety Training. As an organization committed to helping people prevent, prepare for and respond to emergencies in our communities, the Red Cross is honored to salute individuals who make a difference.

Proceeds from the Real Heroes Breakfast benefit the American Red Cross of Central New York, which provides relief to victims of disasters and helps people prevent, prepare for, and respond to emergencies in Onondaga, Cayuga, Cortland, Madison and Oswego counties.

Thank you for taking the time to honor your local hero with your nomination for the Real Heroes Breakfast. Please take a few moments to fill out the form below. You can also download a form here.

ADULT GOOD SAMARITAN
Terri McBride  was born and raised in Central New York, and supports the community on an on-going basis. She generously contributes her time and talent to several organizations. Her philanthropic activities include supporting members of the military, first responders and their families, as well as advocacy for quality care and adoption of rescue animals. She’s also certified in CPR and First Aid.

ANIMAL RESCUE
Casey Hargrave, Levi Darling, and Brad Clark put their own safety aside to rescue a doe who had fallen through the ice on Sandy Pond in January. Venturing out in a canoe, Levi and Brad broke through the ice taking over an hour to reach the doe. The doe panicked and tried to get further away. Quick thinking Casey used his drone and its noise to coax the doe back in the correct direction. These three heroes saved the doe and brought this story to a good ending.

BLOOD SERVICES
Deanna Nance is a Delta Airlines employee who has led the way coordinating four blood drives at the airport, averaging 40 donations each time. She also is a major force in recruiting donors throughout the airport and educating as many people as she can on the importance of donating blood. In this way Deanna is instrumental in countless lives.

FIRE RESCUE
Firefighter Joseph Skardinski entered a smoke-filled apartment and found a man who wasn’t breathing. The resident is hearing-impaired and didn’t hear the smoke alarms.  Firefighter Skardinski carried him out of the apartment. Emergency first aid was provided and the man was transported to a hospital. Due to this firefighter’s heroic effort, the man has recovered from his injuries.

LAW ENFORCEMENT
Officer Michael Howell has been a police officer for 12 years. However, he has served as a first responder for more than 30 years.  In early April, Officer Howell responded to a structure fire, arriving before the fire department.  Upon arrival he determined there were residents still inside the burning building.  He entered the structure and assisted those still inside to safety outside and continued to follow up to make sure they were all ok.

MEDICAL
Nicole Hunt is a development aide supervisor for the New York State Office for People with Developmental Disabilities. She’s a caring individual and tireless advocate for residents of the homes. On June 4, Nicole was working in a home that she was not regularly assigned to, but had been there before, so she was familiar with the residents. One of the residents suddenly became distressed. Nicole performed CPR, and although she became exhausted, she continued until emergency responders arrived and relieved her.

MILITARY
Justin Muir loves what he does, and his attitude and actions prove it. He has served as a Marine with tours in Iraq and Lebanon and helped with disaster relief operations in New Orleans after Hurricane Katrina. Justin suffered an injury while serving in Iraq.  He and his rescue dog Bella are proud graduates of the “DogstoVets” program at Clear Path for Veterans where he now works.  Justin and Bella visit VA hospitals, listening to veterans and helping them have a better day.  Justin also provides transportation for veterans, enabling them to attend special programs for veterans such as at the canteen at Clear Path, a program providing complimentary lunch for veterans.

WORKPLACE SAFETY
John Walsh is a long-time employee of major airlines. While working at Hancock International Airport in Syracuse, he was concerned what would happen if there was an aircraft accident at the facility. He became the leading force in the airport’s Airline Response Plan.  John was involved in emergency drills and went from participant to planner and then to facilitator and evaluator, providing valuable insight into procedures and protocol in the event of an airline disaster. John continually works on improving airline emergency response.

YOUTH GOOD SAMARITAN
Robert James Drager’s 7th birthday will be remembered as more than just a birthday celebration.  During a pool party at his family’s home, “RJ” noticed one of his friends was underwater with his eyes and mouth open. “RJ” quickly responded, pulling his friend to the surface. Adults nearby pulled the boy out of the pool and administered CPR until medical professionals arrived.

Be a part of the Real Heroes Breakfast pageantry! 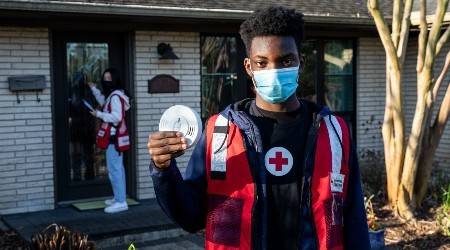