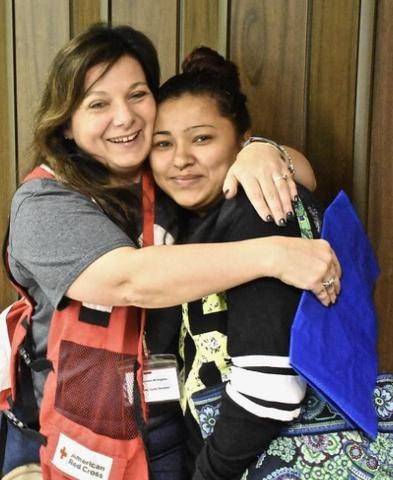 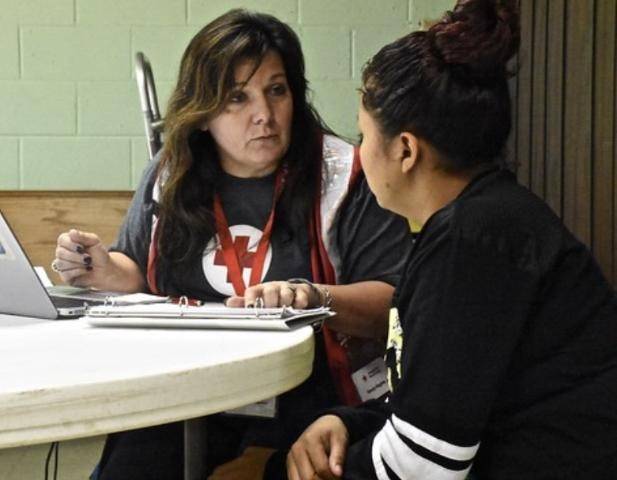 Despite her busy life as a paralegal and single mother of four, Sandy Hughes still makes time to volunteer. She says a family tragedy years ago is part of why she serves the American Red Cross today.

Hughes, a Murfreesboro resident, volunteers with the Heart of Tennessee chapter. She recently deployed to Memphis to help those affected by the tornado that struck the area Oct. 21.

“Being there and taking care of all the people in the apartment complex in Memphis was very rewarding,” Hughes said, “It is also emotional at the same time, because you’re with people who lost everything they had. You’re working with extended family living in apartment units who had lost everything.”

October also marked Hughes’ first anniversary as a Red Cross volunteer. She has already deployed several times, including to Florida for Hurricane Dorian, and for the aftermath of a tornado in Franklin County.

Hughes usually serves as a government liaison or caseworker. She says the casework is what puts her face to face with those in need, helping them navigate the resources available for their recovery.

“It’s like you’re a ray of hope that’s giving someone hope on their darkest day,” she added.

She has also been on the other side of a disaster when a fire destroyed a family home in the late 1990s. She says Red Cross volunteers were there to help.

“While we were watching the home burn to the ground, the Red Cross was there with us,” she said. “They were there not only to assist us as a family unit but also to assist the firefighters.”

She carries that experience with her as a Red Cross volunteer.

“No matter how much you move past an experience like that in your life, it’s still very real when you stand there with that person because you’ve walked that road before,” she said. “There really is a tomorrow after this dark day.”

One of her most memorable moments as a volunteer came during her recent deployment to Memphis. The Red Cross was able to offer food and shelter to a woman whose roof had collapsed. Before they parted ways, the woman asked her for a hug.

“She was only one of several hundred that we helped,” Hughes said.

Being there for people in need is only part of the Red Cross experience. She says they also work to help people prepare for and prevent such situations.

“Even though people think about it as being that ‘darkest day,’ there are many things we do to help people prepare and stay safe,” Hughes said. “We canvass neighborhoods and install fire alarms. We train you to be ‘Red Cross Ready.’ We do The Pillowcase Project at schools to educate children about being prepared in the event of a fire or tornado.”

When it comes to volunteering, Hughes added the Red Cross can accommodate people who have different amounts of time to give, and different talents.

“I feel that the Red Cross does a very good job finding you a place to fit in, regardless of whether you have an hour to give or whether you have 20 or 30 hours a week to give,” she said. “There is room for everyone along the way.”

She now gets to have both of her passions in life — working in the legal field and volunteering. She says it helps that her employer, Nissan North America in Franklin, is a corporate sponsor of the American Red Cross and is cooperative when she needs time off to volunteer.

“Just being able to help people — it’s very rewarding to you as a person to know you’re helping other people,” Hughes said.

For more information about the American Red Cross and volunteer opportunities, visit redcross.org/tennessee.