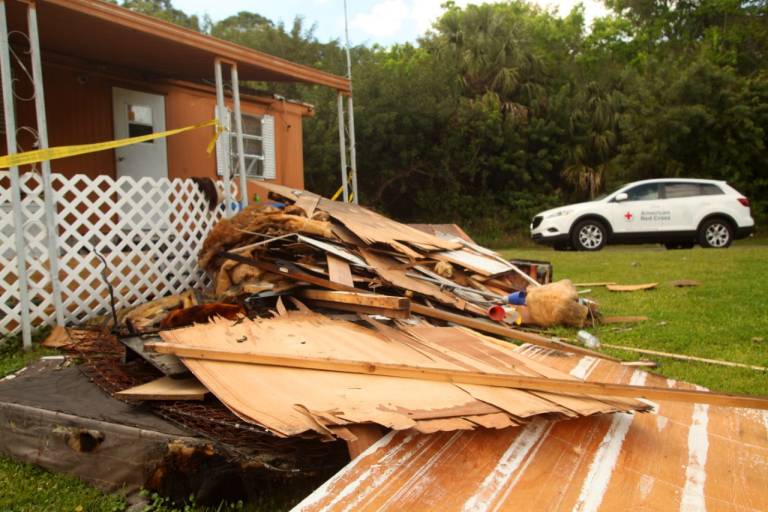 A few weeks after the fire, Red Cross volunteers returned for a visit. While damage was significant, the residents know it could have been a lot worse - they could have lost everything, including their lives. 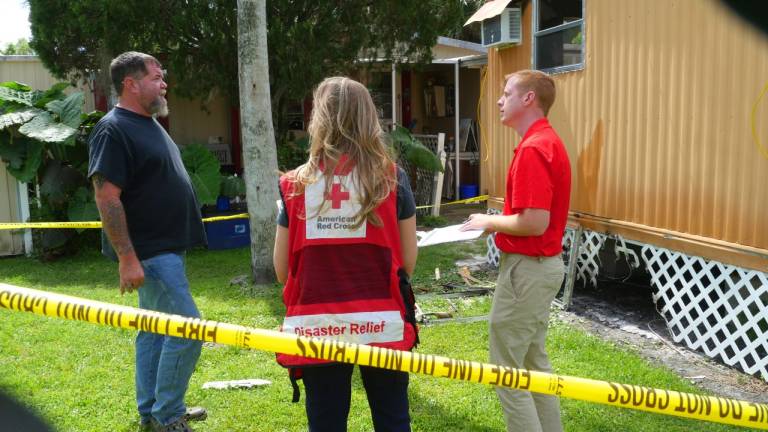 A Port Richey man who survived the home fire shows volunteers where the home sustained the most damage. 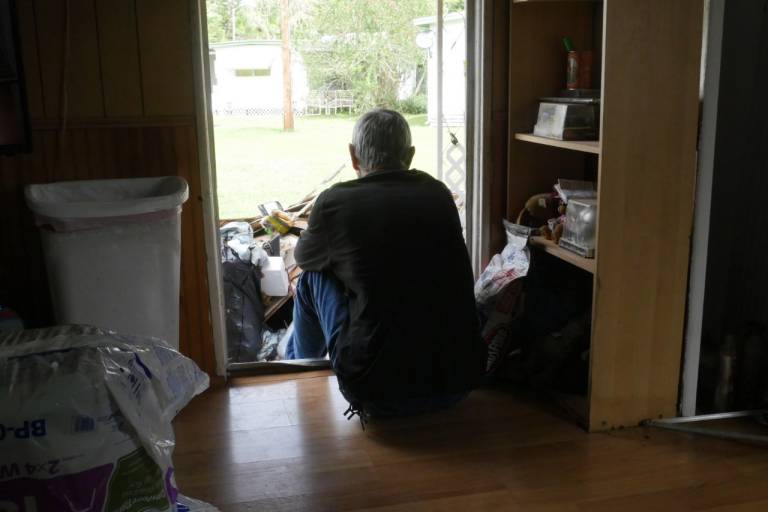 One of the residents who survived the fire looks out on the pile of debris and work ahead.

"I want to let everybody know this happened to us."

In the early morning hours on Feb. 24, 2019, the unthinkable happened -- a Port Richey man’s home caught on fire. The piercing sound of a smoke alarm -- installed just the day before by volunteers from the Mid-Florida Chapter of the American Red Cross and the City of Port Richey Fire Department -- woke one of the residents who woke the homeowner, and both escaped unharmed along with their dog.

Red Cross volunteer Shawn Clark was on the team that visited the mobile home park the day before to install free smoke alarms as part of a Sound the Alarm home fire safety event. Shawn has also seen first-hand the damage and devastation that home fires cause. “While we can’t always stop fires from happening, we can help people be prepared. If the worst happens, the Red Cross will be there then as well.”

The homeowner* recalls, “They [the Red Cross and fire department] came here at about 2:30pm in the afternoon and they installed the smoke detectors, and at 2:47am, the house caught on fire.” He credits the newly installed smoke alarms as the reason they survived. “They did save our lives,” he said.

Sandy and Patti, who work as a team, have responded to hundreds of home fires in Pasco County over the last five years. They quickly recognized this case was different. “We typically ask the homeowner, ‘did you have working smoke alarms?’,” Sandy explained. When he replied yes and that the alarms had been installed yesterday, Sandy said, “That’s when ‘my alarm’ went off. I knew at that point, it was very important.”

They weren’t alone in recognizing the significance. Port Richey Fire Inspector Thomas Quinn was at the scene of the fire. His initial thoughts were, “Didn’t we just put smoke detectors in this [home]?” The Incident Commander quickly confirmed that was the case.

Paul Johnston, a Disaster Program Manager for the Mid-FL Chapter of the Red Cross, applauded the result of the successful collaboration. “Community preparedness requires many stakeholders,” he said. “In this instance, Port Richey Fire Department selected the community and assisted with installation that day. The end result was two lives saved."

A few weeks after the fire, Shawn, Sandy and Patti returned for a visit. While all areas of the home were smoke damaged, the fire was contained to the back of the residence. The homeowner, who is experienced in home remodeling, has been able to make many of the necessary repairs and was in the process of replacing items that were damaged or destroyed. He knows it could have been a lot worse - they could have lost everything, including their lives.

When asked about his home fire escape plan, the homeowner acknowledged, “I never even thought about it,” prior to the fire. Now he has a simple plan — “get the dog out, move the Harley.”

RED CROSS HOME FIRE CAMPAIGN Home fires are the nation’s most frequent disaster and take an average of seven lives every day in the United States. Sound the Alarm events are part of the Campaign, launched in 2014 to help reduce the number of deaths and injuries caused by home fires. So far, the Campaign has reached more than 1.7 million people and saved at least 552 lives nationwide.

HELP SOUND THE ALARM TO #ENDHOMEFIRES Over a two-week period, April 27-May 12, volunteers are needed to work alongside fire departments and community partners to install 100,000 free smoke alarms nationwide and educate families about fire prevention and safety. In Central Florida, the Red Cross has eight events during this time across six counties. Event registration is open for individuals and groups to volunteer at www.SoundTheAlarm.org.

* The case above represents the 2nd and 3rd documented lives saved in Central Florida because of the Red Cross Home Fire Campaign. The residents chose to share their story to help others, but requested their names not be used. The Red Cross honors privacy requests and will not publish this information.