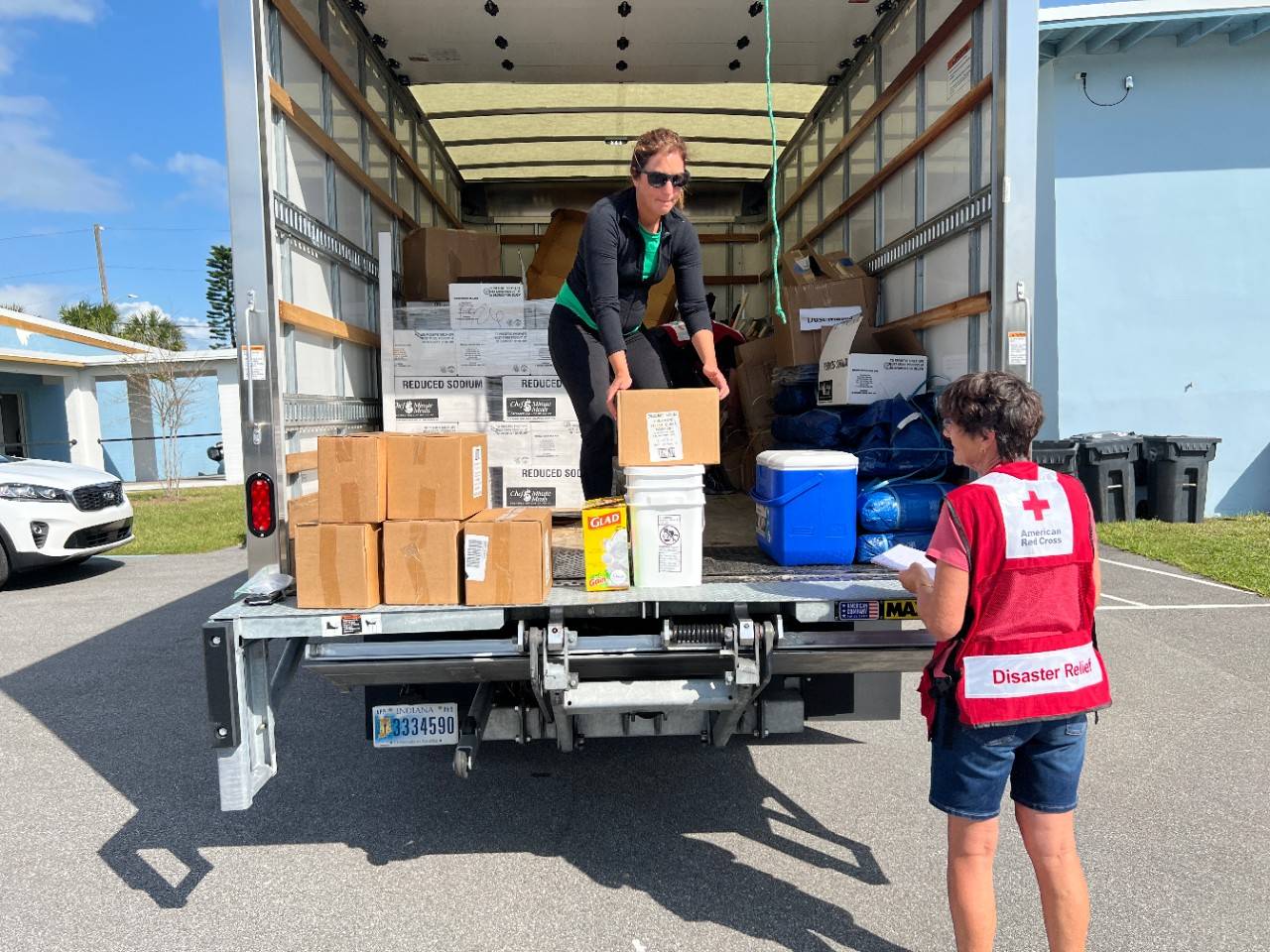 Flagler Beach Mayor Suzie Johnston as she hopped on a Red Cross box truck to help provide emergency relief supplies to her neighbors after Hurricane Nicole.

In mid-November, Hurricane Nicole hit the east coast of Florida with strong winds, rain and a hazardous storm surge, bringing major flooding damage to coastal homes. The American Red Cross and our partners are supporting people with care, meals and relief items while still helping those impacted by Hurricane Ian which devastated parts of Florida just six weeks ago.

People like Becky Whitson, a Flagler Beach resident, have expressed their gratitude for the supplies she and the community around her has received from the Red Cross. “It’s beyond the physical need of it,” Whitson said. “I think it just tells people that we care and somebody’s out there looking after them.”

Although Whitson’s home was spared, she is thinking about many of her neighbors who have experienced devastating flooding. “Our neighbors have pulled everything out to the street from their homes,” Whitson says sadly. “That’s heartbreaking to watch.”

Founded on disaster preparedness and relief, the Flagler Strong group, alongside the Red Cross, is on a mission to strengthen the community by proactively and strategically serving those in need. No one knows this better than Flagler Beach Mayor, Suzie Johnston, who jumped in to serve the community after Hurricane Ian, and has done so again, following Nicole.

“Nicole attacked us from both sides of the island, flooding hundreds of homes,” Johnston said sorrowfully. “I have been cleaning out homes of residents, I have cried with them – it breaks my heart. They are tired. They just went through flooding with Hurricane Ian and now they’re going through it all over again.”

One of the major after-effects of the storm was the limited access to food. The Red Cross, working alongside our partners, has provided more than 2,200 meals and snacks and distributed personal hygiene kits, as well as other relief supplies, to those in need.

“When the Red Cross reached out it was like having angels call,” Johnston said. “Every bit of a helping hand makes a difference, and the residents are just singing the praises of volunteers who are driving down the street, delivering sandwiches in the afternoon and a hot meal in the evening. Everyone lost their food, their refrigerators, their ovens don’t work, at one point they cut off the water because the septic tanks were flowing up through their homes. Without the help of the Red Cross, a lot of these individuals would not have eaten for days.”

Johnston joins her parents and grandparents as lifelong residents of Flagler Beach, and as a result, knows many individuals who reside there. This knowledge came in handy when Johnston decided to hop on one of the Red Cross Emergency Response Vehicle serving meals in the affected community and offer a small bit of sunshine during the storm.

“I knew exactly the areas that were hit, individuals that were staying in their home calling residents out by their name on the loudspeaker, while delivering them a hot meal,” she recalls. “They were thrilled, they said, Mayor – you are everywhere! Confused at first as to how the Red Cross knew them by name, they would get to the window and realize it is their mayor.”

“I feel like normalcy is a long way off.  It’s going to take a lot of volunteer hours, help from other residents and compassion, but it’s still going to be a long road,” she said.

You can help people affected by disasters like storms and countless other crises by making a gift to Red Cross Disaster Relief. Visit redcross.org, call 1-800-RED CROSS (800-733-2767), or text the word REDCROSS to 90999 to make a $10 donation.