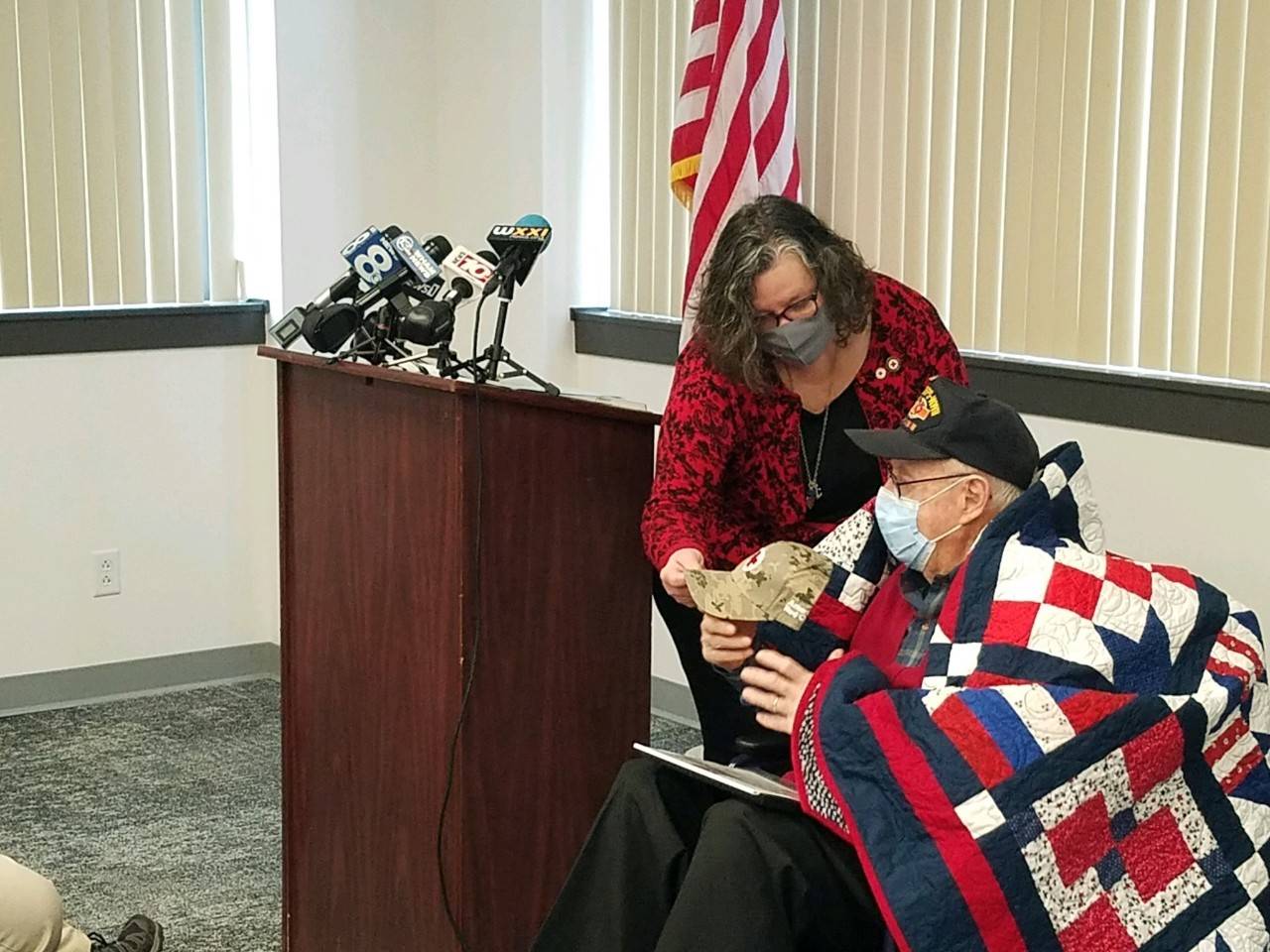 ROCHESTER, N.Y., February 22, 2021 — Thanks to the actions of a thoughtful and resourceful local Red Cross Volunteer, a Rochester-area WWII veteran will be honored more than 75 years after serving his country.  Joseph Young, Jr., who served as a Second Lieutenant in the U.S. Army’s 20th Corp under General George Patton’s command, will receive a Quilt of Valor at a gathering at the Greater Rochester Chapter of the American Red Cross office at 1040 University Avenue on Wednesday, February 23, at 12:00 p.m.  U.S. Congressman Joe Morelle, representing New York’s 25th Congressional District, will also be on hand to honor Young.

Red Cross Community Volunteer Leader Laurie McFaul Frey, who in December accompanied the 98-year-old veteran to a Wreaths Across America ceremony to honor deceased U.S. service members, discovered that he had never been honored for his service in WWII by any local group or program. Through a collaboration with Red Cross staff and volunteers, including Services to the Armed Forces (SAF) Chair Susan Louis, a request was made to the local Chapter of the Quilts of Valor for a hand-made quilt for Lt. Young.  Barbara Frost, New York State Coordinator for the Quilts of Valor Foundation, will present the quilt to Young.

A native of Rochester, Young entered the military in December, 1942 and was assigned to 20th Corp, a part of Patton’s vaunted 3rd Army, with which he served until December 1945.  Second Lt. Young was part of the second wave on Omaha Beach during the Normandy Invasion on June 6, 1944, and fought on from France through Austria. For his bravery and service, 2nd Lt. Young was presented with four medals - a Good Conduct medal, a WWII Victory medal, European African Middle Eastern Campaign with Three Stars, and an American Campaign.

After his discharge, Lt. Young came back to Rochester and worked at Taylor Instruments for a few years before accepting a position at Eastman Kodak, where he worked for 36 years until his retirement in 1985.  In 1949, he married his lovely wife Helen Rose Jordan. They were married for 54 years and had three children: Joseph, Deborah and Robert. They also have five grandchildren and three great grand children

Catherine Roberts, whose son, Nat, was deployed in Iraq at the time, founded Quilts of Valor in 2003 after experiencing a dream of a service member in despair gaining comfort after being wrapped in a quilt.  Since that time, it has evolved into a movement of over 10,000 volunteer members across 600 groups in all 50 States.  The organization’s primary objective is to bring healing to service members and veterans through an expression of gratitude and the belief that the quilts bring a tangible comfort to those who receive them. This year, Quilts of Valor expects to reach the milestone of awarding its 300,000th quilt to a veteran.

While many recognize the American Red Cross as an organization that collects and distributes blood products and responds to local and national disasters, its Service to the Armed Forces program (SAF) has a long and storied history of supporting the military and is a prominent and valuable asset the organization provides within communities throughout the nation. Today, the American Red Cross continues to serve the U.S. Military community from the time a service member takes the oath to navigating life as a veteran. The Red Cross SAF program holds a congressional charter to provide the direct link of communication between the active-duty service member and their family at home.

Give Thanks, Give Life with the Red Cross this Holiday
.type=article.p=1
View All
/content/redcross/en/local/new-york/western-new-york/about-us/news-and-events/news/red-cross--quilts-of-valor-foundation-collaborate-to-honor-local