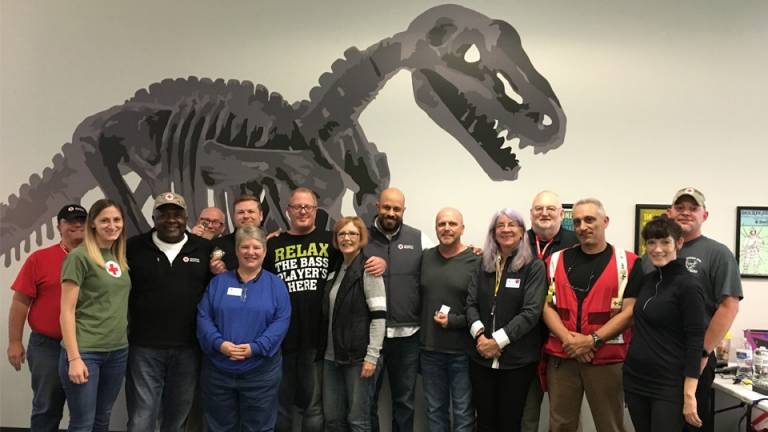 Dan and Rob of PrintGlobe pause for a photo with staff and volunteers at operational headquarters. 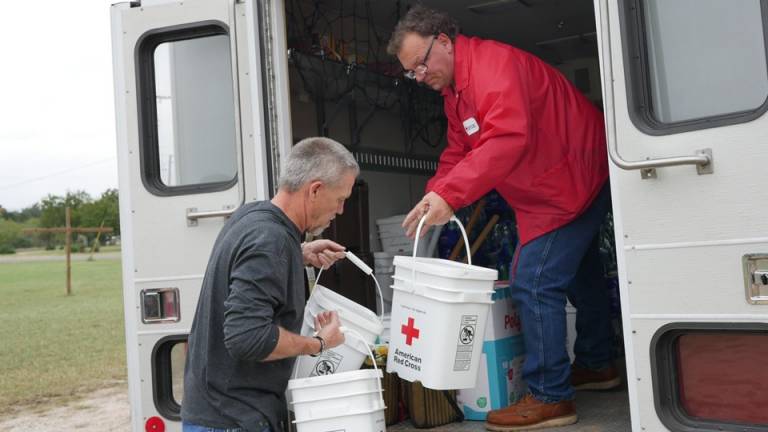 Pastor Randy Taylor receives a delivery of clean up kits from the Red Cross the First Baptist Church of Granite Shoals. 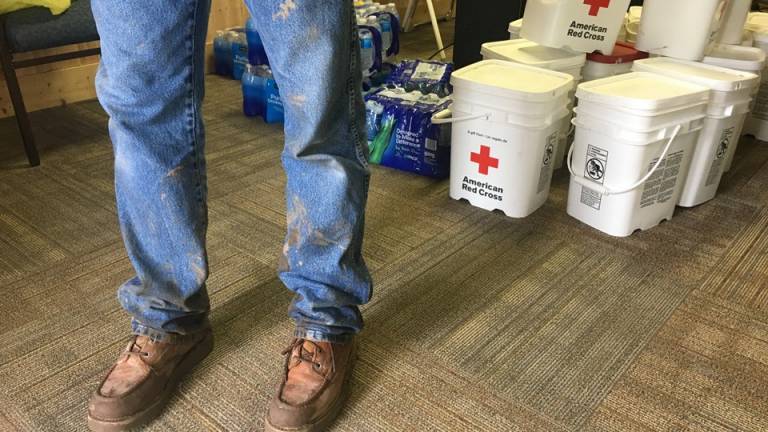 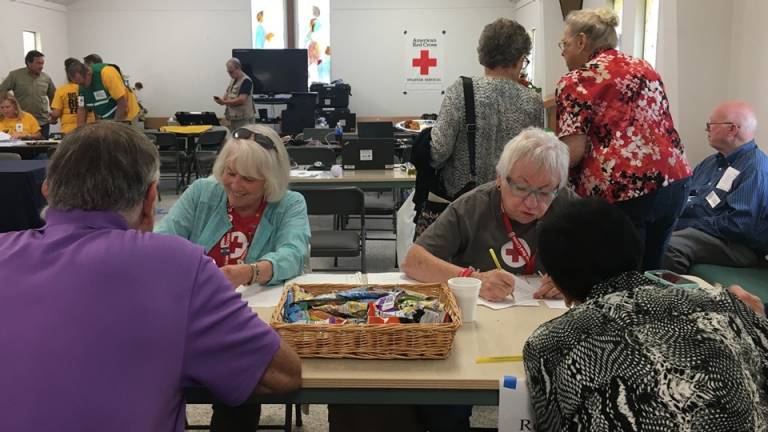 Residents in Sunrise Beach Village meet with Red Cross caseworkers at the Multi Agency Regency Center in their area. 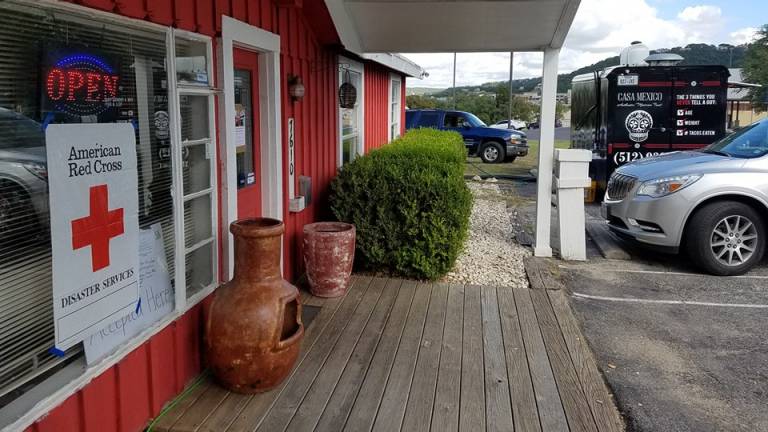 The entrance of Casa Mexico is readied for the Red Cross Service Delivery site in Lago Vista. 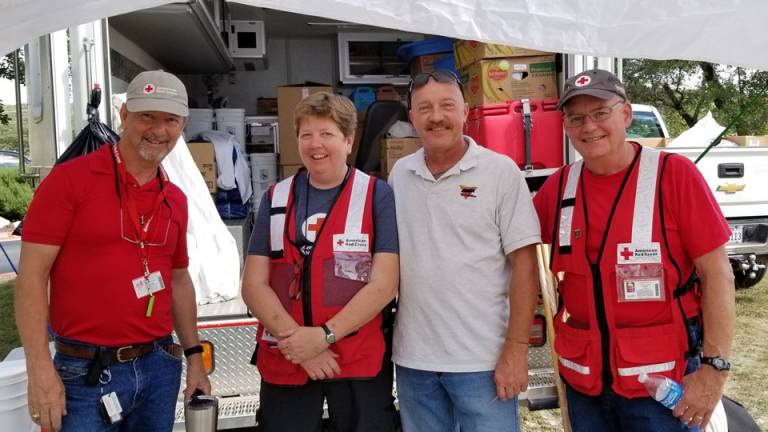 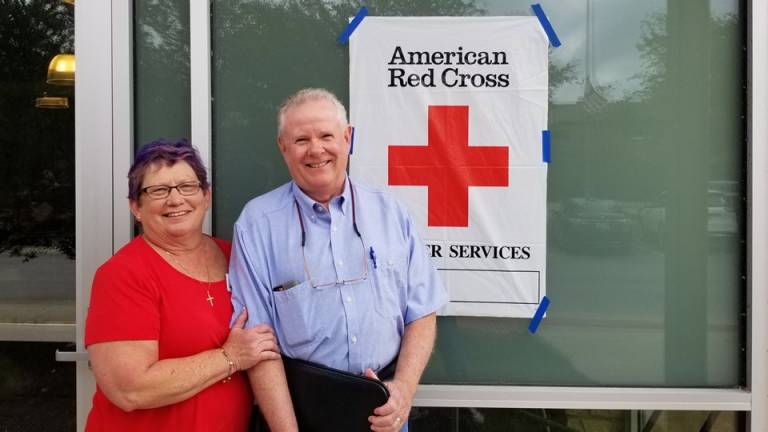 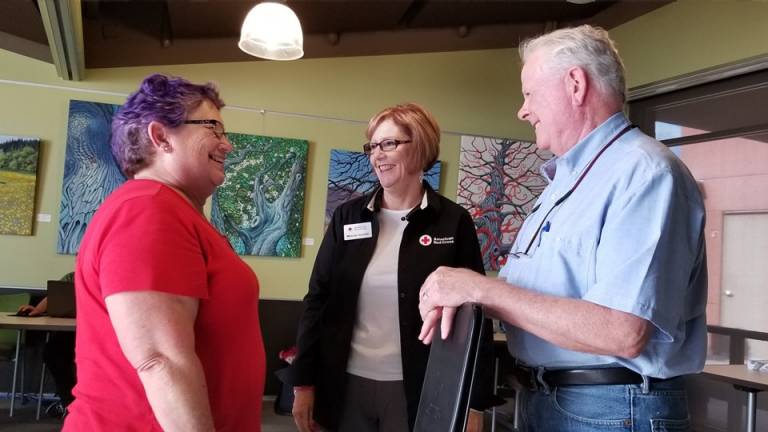 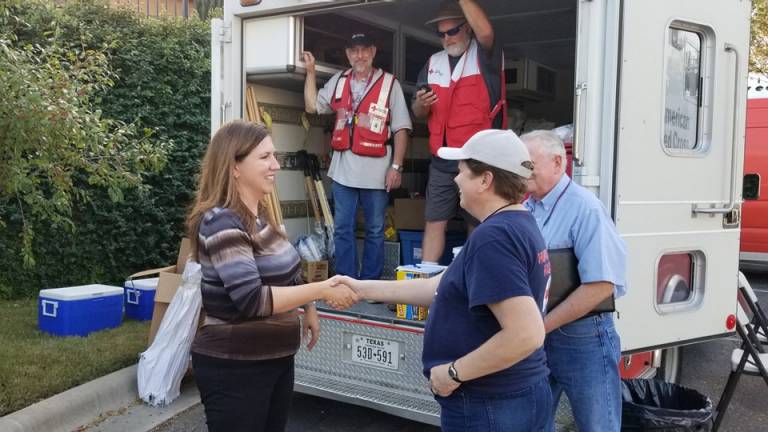 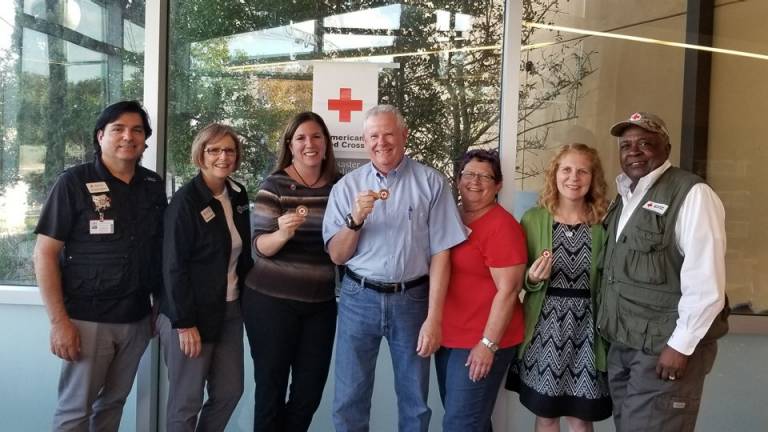 After floods ravaged communities along the Llano and Colorado River the American Red Cross began mobilizing in three counties including Llano, Burnet and Travis.  It’s undeniable that an important component to the success of the disaster response is utilizing relations the Red Cross has with community members.  These relationships enable the Red Cross to organize and provide services for residents affected by disasters like floods.

Here are just a few examples of how community partnerships can assist the Red Cross after a disaster.

As operations began in the disaster affected areas, regional leadership and volunteers deploying to the Austin area from around the country needed an Operational Headquarters. After quickly overwhelming the office space of the local Red Cross chapter in Austin, local print company PrintGlobe generously opened their doors to the Red Cross offering a spacious area in their own headquarters for the Red Cross to relocate their command center.

“PrintGlobe is honored to host American Red Cross Serving Central & South Texas Region[DK1]  Texas as they help provide relief to those affected by TX flooding,” they said in a Facebook post. “We love being a small part of the wonderful work they're doing.”

Once the affected areas were safe enough to enter, Red Cross volunteers were on the ground assessing the needs of the communities and planning the next steps to help them begin their recovery.

“This area is a small community. Everyone knows everyone one way or another. " Pastor Taylor said. "People will come together to help.”

Pastor Taylor continued to work with the City of Marble Falls and utilized their church to host a Multi Agency Resource Center (MARC) where residents of Granite Shoals and surrounding areas were able to meet with the Red Cross and other relief agencies to help further their recovery process.

As news of the MARCs in Llano County spread throughout communities, the Red Cross was approached by Pastor Kevin Henderson of the Sunrise Beach Federated Church in Sunrise Beach Village, TX.

“I learned that there were going to be MARCs in Llano and Kinglsand, and because we were cut off from those cities because of the bridge that was destroyed, I knew it was going to be hard for some of our folks to get there.” Pastor Henderson said.

Pastor Henderson visited the MARC in Kingsland and asked the Red Cross if they would be able to bring their services to Sunrise Beach Village. “Within about 15 minutes we had a plan that the Red Cross was going to be in Sunrise Beach,” he said.

Pastor Henderson appreciated seeing the morale boost within his community. “This is helping us feel connected by having this here in our community. People are starting to feel like they’re not cut off. We’ve got folks out there who are going to help us.“

The Red Cross continued its services in Travis County thanks to the generosity of local business owner Karla Berry who opened her doors to host a Red Cross Service Delivery Site in Lago Vista.  Not only did Casa Mexico, Karla’s Imports and Coffee become the Red Cross service site, it was already serving as a community site where donations were being collected and distributed to residents who were in need.  Karla worked with Mayor Ed Tidwell to get the word out to the community which allowed the Red Cross to better serve the residents of Lago Vista and surrounding areas.

“I did this because I know people needed the help,” said Karla.  “I have no problem using my business to make sure that those who need the help are getting it.  I just hope that the little that I am able to do makes it easier for those who are suffering.”

When the Colorado River began rising, the Lower Colorado River Authority (LCRA), who manages the flow of the Colorado River, began opening flood gates to counter the rising lake levels. The City of Lakeway didn’t hesitate to work with the Red Cross to ensure residents needing refuge had a safe place to go.  Jim Powell, a resident of Lakeway and member with The Lakeway Church, agreed to have his church facilities surveyed  and worked with the Red Cross so that they could provide shelter for residents escaping flood waters if needed.

The Lakeway community also stepped up to assist the Red Cross with staff lodging as the organization had a difficult time securing lodging for almost 50 volunteers that were mobilized for the disaster response due to hotels being at capacity for a local event.  Once the community was notified of the lodging obstacle both Jim Powell reached out to Lakeway Mayor, Sandy Cox who worked with Superintendent of Schools, Dr. Brad Lancaster, to allow staff to lodge in a local school.  The staff quickly mobilized and established a staff shelter facility within the school district.

“It doesn’t matter if you only help one person, or one family, just that we are here to help members of our community during this devastating disaster, “said Lakeway Mayor Sandy Cox.

Collaborating with community members and partners is an integral part of providing necessary services to those who need it most. The Red Cross Serving Central Texas continues to build relationships with these vital resources before, during and after disasters.

To learn more about becoming an active volunteer partner with the Red Cross, please visit redcross.org/volunteer.

Or, help support people affected by disasters like the flooding in Central Texas by making a donation to Red Cross Disaster Relief.  Visit redcross.org, call 1-800-REDCROSS or text the word REDCROSS to 90999 to make a $10 donation.

Thank You for Your Support
.type=article.p=1
View All
/content/redcross/en/local/texas/central-and-south-texas/about-us/news-and-events/news/community-partners