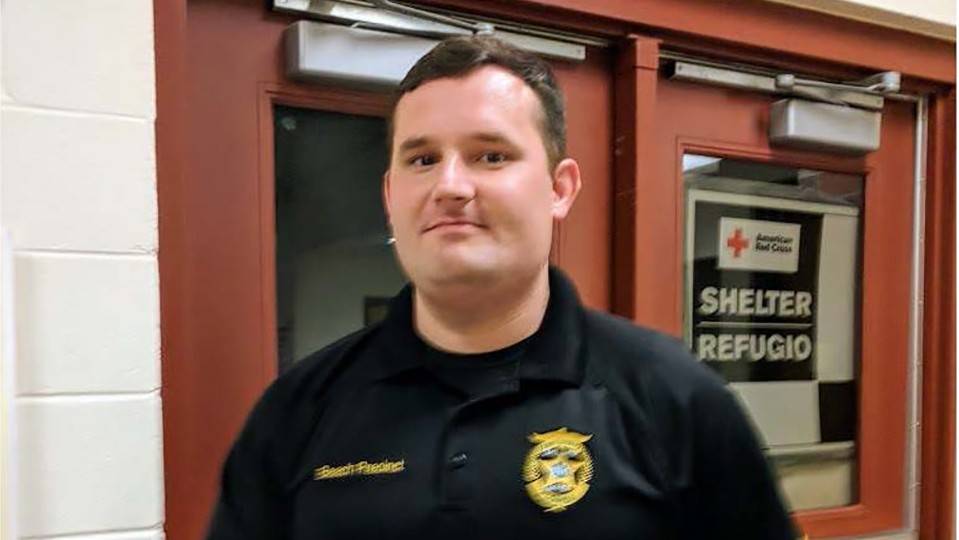 “I’ve been in other hurricanes like Ivan or George, but this is by far the worst I’ve ever seen.”

He compares the sound of the storm to the roar of a jet engine and admits it scared him. “I’ve never seen anything like this before,” he said. “I’ve been in other hurricanes like Ivan or George, but this is by far the worst I’ve ever seen.”

He said the very worst was when he was trying to hold his front door shut, to keep out the howling wind and driving rain. He recalls “holding the rope” while his wife and three-year-old daughter took refuge in the bathroom. He could feel himself tiring, but he persevered.

“God was giving me the strength to hold that door,” Cole said. He clung to the hope that, “If you keep fighting, good things come your way.”

Cole is one of at least 40 police officers in the area who personally weathered the storm and are dealing with the aftermath, even as they carry out their law enforcement duties. He appreciates the officers from other police departments across the state who have arrived to support local police to maintain public security.

One of his current duties is  working with the Red Cross to ensure a safe environment in an emergency shelter. “I was lucky because I’m staying with extended family and I have insurance,” he said, “but that is not the case of many people here.”

Partnerships with local police departments are vital for the Red Cross. Cole is actually enjoying his assignment: “You get to meet Red Crossers from all over the country and if there’s an issue, we will work it out.”

The Red Cross works with a wide variety of public, nonprofit and private entities to bring relief to disaster-stricken communities.

Afghanistan: How the Red Cross and Red Crescent are Helping
.type=article.p=1
View All
/content/redcross/en/local/florida/north-florida/about-us/news-and-events/news/disasters-don-t-respect-authority-