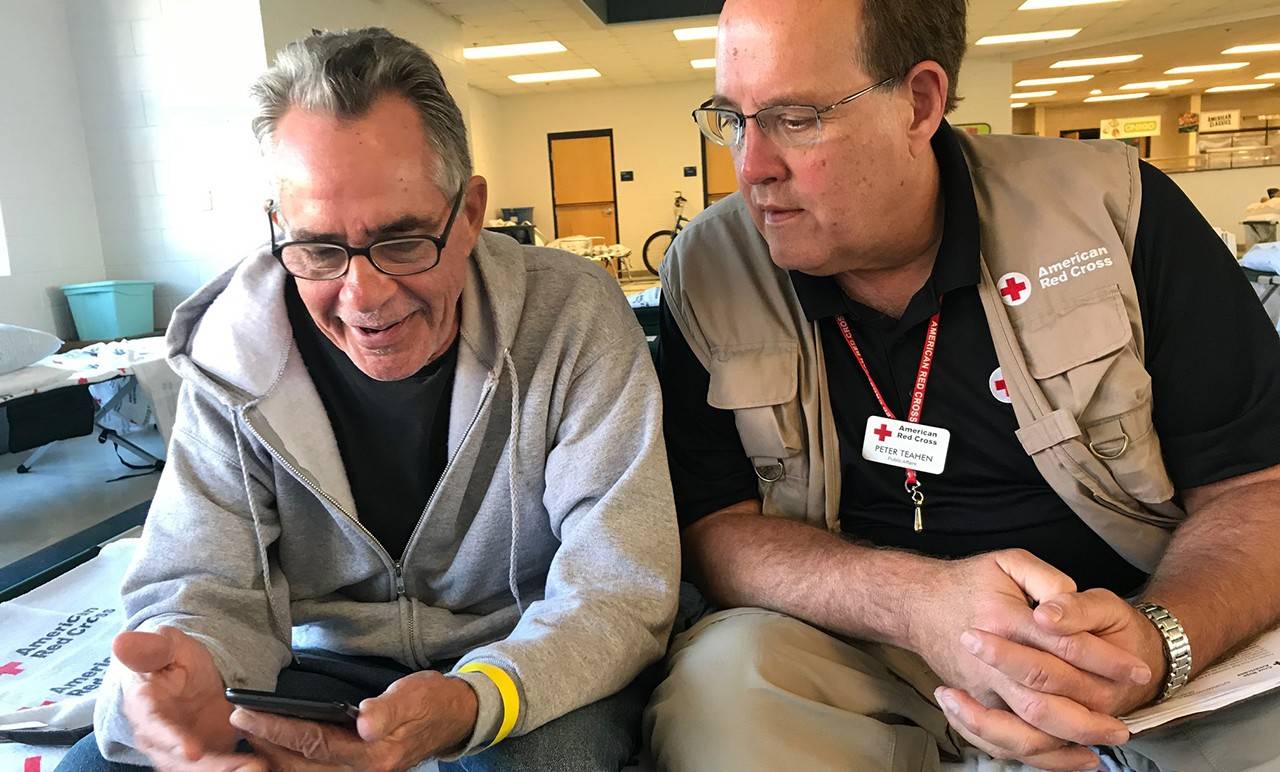 Steve Meyers is delighted to see that his call to family members in Iowa is ringing through. American Red Cross volunteer Peter Teahen – himself from Iowa – was able to make the call happen. It would be Meyers’ first contact with family in nearly three weeks, since before Hurricane Michael struck the Florida panhandle.

PANAMA CITY BEACH, Fla. – As the first resident of the newest American Red Cross shelter for survivors of Hurricane Michael, Steve Meyers had his pick of dozens of cots, neatly lined up across the media center of J.R. Arnold High School.

The shelter is expected to fill steadily as evacuees move from Deane Bozeman School, which will transition back to its pre-storm use as a public school early next month.

Meyers told Red Cross volunteer Peter Teahen he looks forward to the comfort and support at the Red Cross facility after spending more than a week in a motel without electricity, waiting to get into his new apartment.

“Without transportation, I had no way to evacuate to a shelter before the storm or to a shelter after,” he explained.

After the storm, he walked a mile in each direction from his storm-battered motel and the damage was so severe he couldn’t recognize what was “there” before.

Meyers said he appreciated getting meals from a Red Cross food truck; it was a volunteer on board who suggested that he come to the shelter.

One of the first things he asked for was help contacting his family in Illinois. He hadn’t been able to reach any of them since the hurricane.  “They don’t know if I’m dead or alive,” he told Teahen.

The Red Cross continues to provide shelter for nearly 1,000 people displaced by Hurricane Michael in Florida. Meanwhile, nearly 365,000 meals have been served both in shelters and across impacted neighborhoods. This disaster relief is free, made possible by the generosity of the American people.

Get Ready for Another Busy Hurricane Season; Become a Volunteer
.type=article.p=1
View All
/content/redcross/en/local/florida/north-florida/about-us/news-and-events/news/first-jr-arnold-resident