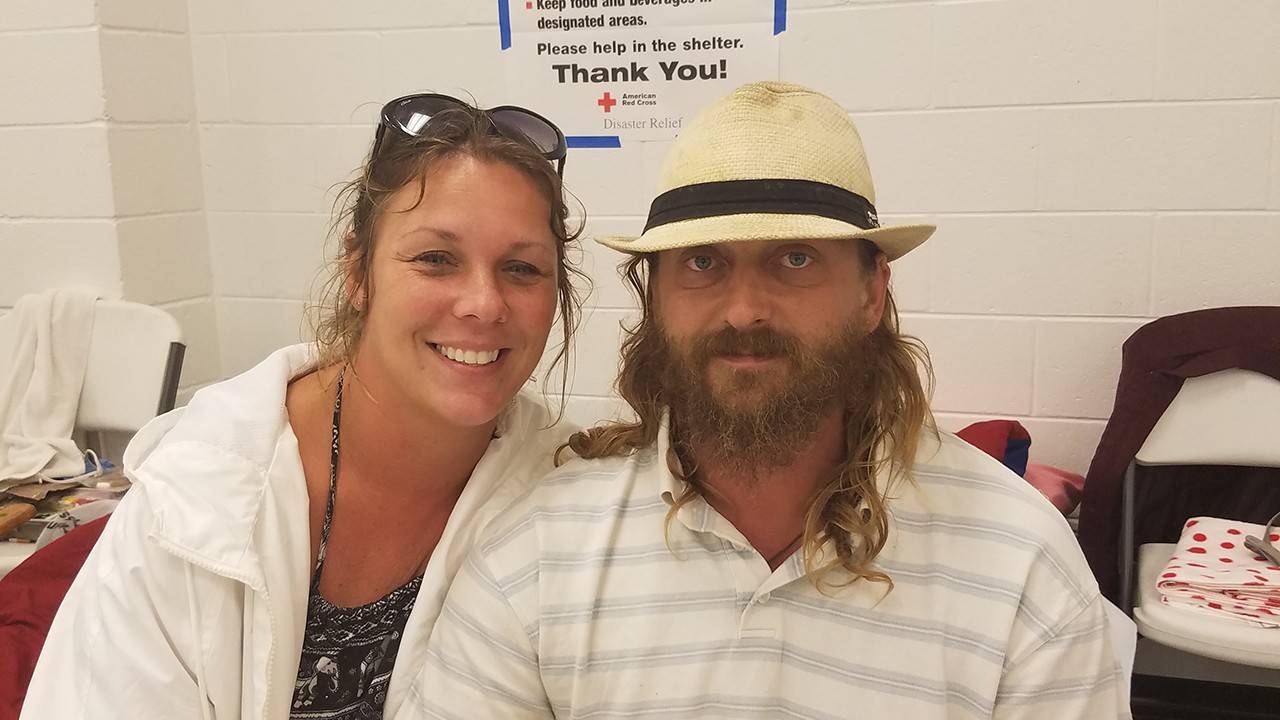 Casey and Amy Hawkins and three of their children have called an American Red Cross shelter home since Oct. 10, when Hurricane Michael totaled their duplex in Port St. Joe, Fla. With help from Red Cross, other agencies and the community at large, Casey Hawkins is determined to keep his family in the place he calls “paradise.”

Casey Hawkins, a Port St. Joe resident who took refuge in a Red Cross shelter with his family.

HONEYVILLE, Fla. – Casey Hawkins thought he had found paradise in Port St. Joe, Fla., when he, his wife Amy and three children moved into a two-story duplex with a view of the beach and the Gulf of Mexico.

Exactly a month later, Hurricane Michael surged through their home, leaving a skeleton of wood and wreckage. Like thousands of others, the Hawkins family took refuge in an American Red Cross shelter.

Unlike many of those storm victims, Casey Hawkins is adamant that he and his family will rebuild their lives on the Florida panhandle.

“It’s the beach, but it’s still country,” the Alabama transplant said with appreciation. His gratitude extends to the Red Cross and other nonprofits, utility workers and the National Guard that have swarmed to the area.

Hawkins and his family have been living at the Honeyville Community Center, a Red Cross shelter some 25 minutes inland from their beachfront home. A carpenter and handyman by trade, he’s sure there will be plenty of call for his skills.

He explained the steps ahead to his children: “All you gotta know is, before, when we moved here, most of these houses were here.

“Now, you get to tell people that you lived through one of the strongest hurricanes in history and it tore up the whole city and then your daddy helped rebuild it.’”

In the meantime, Hawkins and his family have relied on the Red Cross for shelter, food and help with all the paperwork needed to get back on their feet. Encouragement from Red Cross volunteers has helped lift his spirits; so has taking up chores that give him a sense of purpose.

He’s helped clear storm debris, run errands for people without vehicles. One morning, he joined a group of men clearing space near the shelter so the children would have a place to play.

Now he cracks jokes with Jerry Fennell, the shelter manager; he finds encouragement and a willing ear from shelter volunteers Anna Distaso and Deb Berks, a.k.a. “Miss Deb.”

Berks, of Portland, Ore., retired from a career in nursing last year and went directly into volunteering for the Red Cross. She noticed that Casey was quiet in the early days at the shelter, while Amy maintained a cheery personality. Then, as days went by and prospects for the future began to come into focus, Casey’s sense of humor kicked in.

That transformation is vital for disaster survivors to be able to move forward, Berks said. And it’s something that reinforces her pride in being a Red Cross volunteer.

“It’s been wonderful to me because I miss feeling helpful,” since retirement, she said. “These people, this experience: I feel like I’ve been allowed to be myself. And I absolutely love making those kind of connections, like with Casey.”

More than 90 percent of Red Cross disaster workers are volunteers, providing shelter, food, medical and emotional support and recovery guidance for those in need. To learn about joining this humanitarian effort, visit redcross.org/volunteer.

Get Ready for Another Busy Hurricane Season; Become a Volunteer
.type=article.p=1
View All
/content/redcross/en/local/florida/north-florida/about-us/news-and-events/news/hurricane-survivors-hold-hope