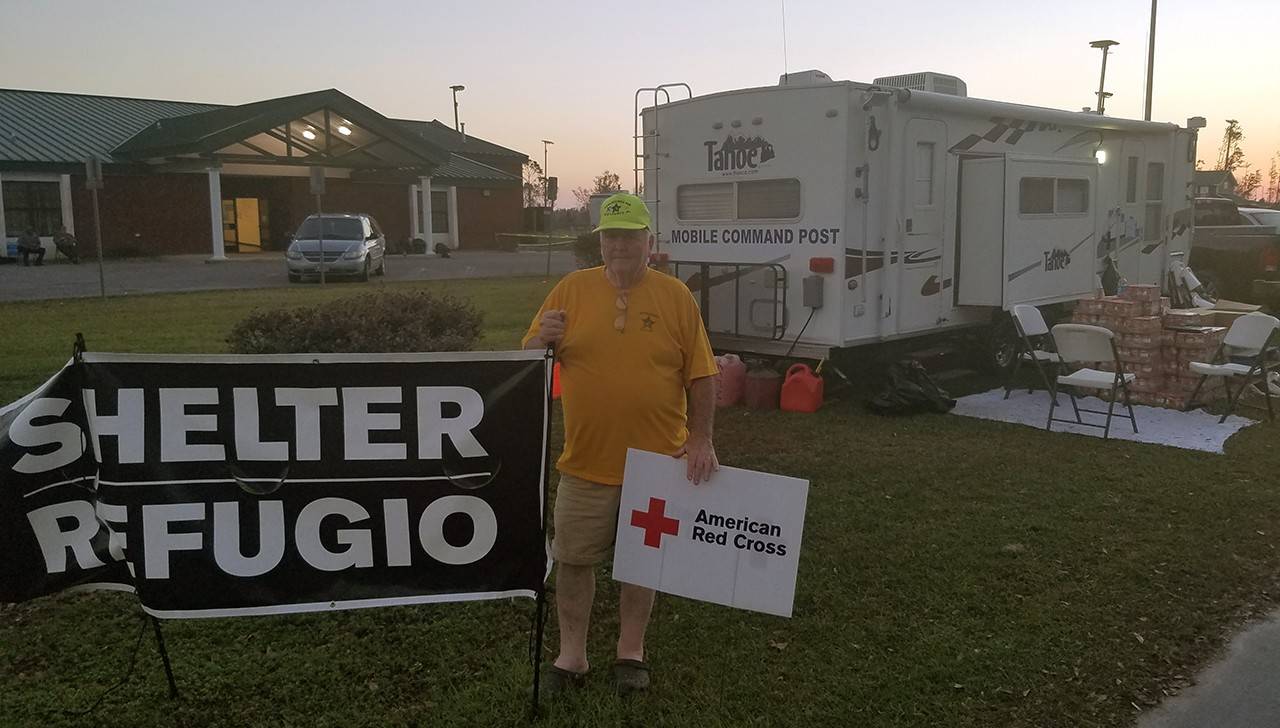 Don “Donnie” Minchew is proud to have been able to open a shelter for his friends and neighbors in Honeyville, Fla., days before Hurricane Michael hit. Minchew is a longtime local leader and Red Cross volunteer, and he plays a pivotal role in disaster response and recovery in his community, some 15 miles inland from where the Category 4 storm made landfall.

“Because of Donnie – not Don, Donnie! – this transition from community shelter to Red Cross shelter was magic. He knew everything and everybody. And … he’s just an original character; everything good about this part of Florida, he represents.”

WEWAHITCHKA, Fla. – When the community of Wewahitchka and surrounding areas needed an evacuation shelter before the worst Florida hurricane in living memory, Donnie was the go-to man.

After the hurricane hit, Donnie could set you up with a tree cutting and removal service. Same goes if you were looking for someone to recommend a new truck after yours was washed out by Hurricane Michael.

Donnie was also the man who knew how to find top-grade Tupelo honey, public showers, the closest voting booth or things like pain relievers and a 25-foot garden hose.

Every small community has a key person to get things done, especially when times are tough. For Honeyville, White City and parts surrounding Wewahitchka (known as “Wewa” by locals), that person is Don “Donnie” Minchew.

Everyone seems to be on a first-name basis with Donnie, a retired municipal manager and Red Cross volunteer.

Donnie is one the thousands of locals the Red Cross trains and depends on across the country to respond quickly and effectively to disasters.

For his part, Donnie continued to run his one-man, informal networking center from his RV in front of the Honeyville Community Center after it transitioned into a Red Cross emergency shelter. At the height of the storm, more than 250 people took refuge there; that number has dwindled as Red Cross, FEMA and other organizations connected residents with recovery and transition resources.

Donnie is a master of multi-tasking. In short order, he can be attending to a stream of local questions and requests while having side conversations with shelter residents and Red Cross disaster volunteers.

“I flip from one thing to the other. I’ve always been that way,” Donnie said. “We’re a small community. It’s really no amazing thing when you’re this small.”

At 68, he recounts a lesson from his high school American history teacher: “You don’t have to know it as long as you know where to find the answer. And I’ve lived by that. Makes it a lot simpler.”

Veteran Red Cross disaster responder Jerry Fennell from Wisconsin, who has been managing the Honeyville site, has great respect for his local partner.

“Because of Donnie – not Don, Donnie! – this transition from community shelter to Red Cross shelter was magic,” Fennell said. “He knew everything and everybody. And … he’s just an original character; everything good about this part of Florida, he represents.”

The two have clearly bonded, not the least because Donnie has personally surprised Fennell with coffee at 4:30 a.m. during an overnight shelter shift, when the two “stayed up the rest of the morning, telling lies,” Fennell said with a laugh.

Donnie first opened a Red Cross shelter decades ago, for “Hurricane Opal or Kate – one of ‘em,” and he’d like to see more of his neighbors get trained by the Red Cross. He wants people to be prepared and heed the warnings of a potentially deadly storm.

“People on this coast have gotten so complacent … but this was one where you had to leave,” he said.

To stay on top of emergencies that impact you and your loved ones far and wide, download the free Red Cross Emergency App.

Get Ready for Another Busy Hurricane Season; Become a Volunteer
.type=article.p=1
View All
/content/redcross/en/local/florida/north-florida/about-us/news-and-events/news/local-volunteer-is-key-