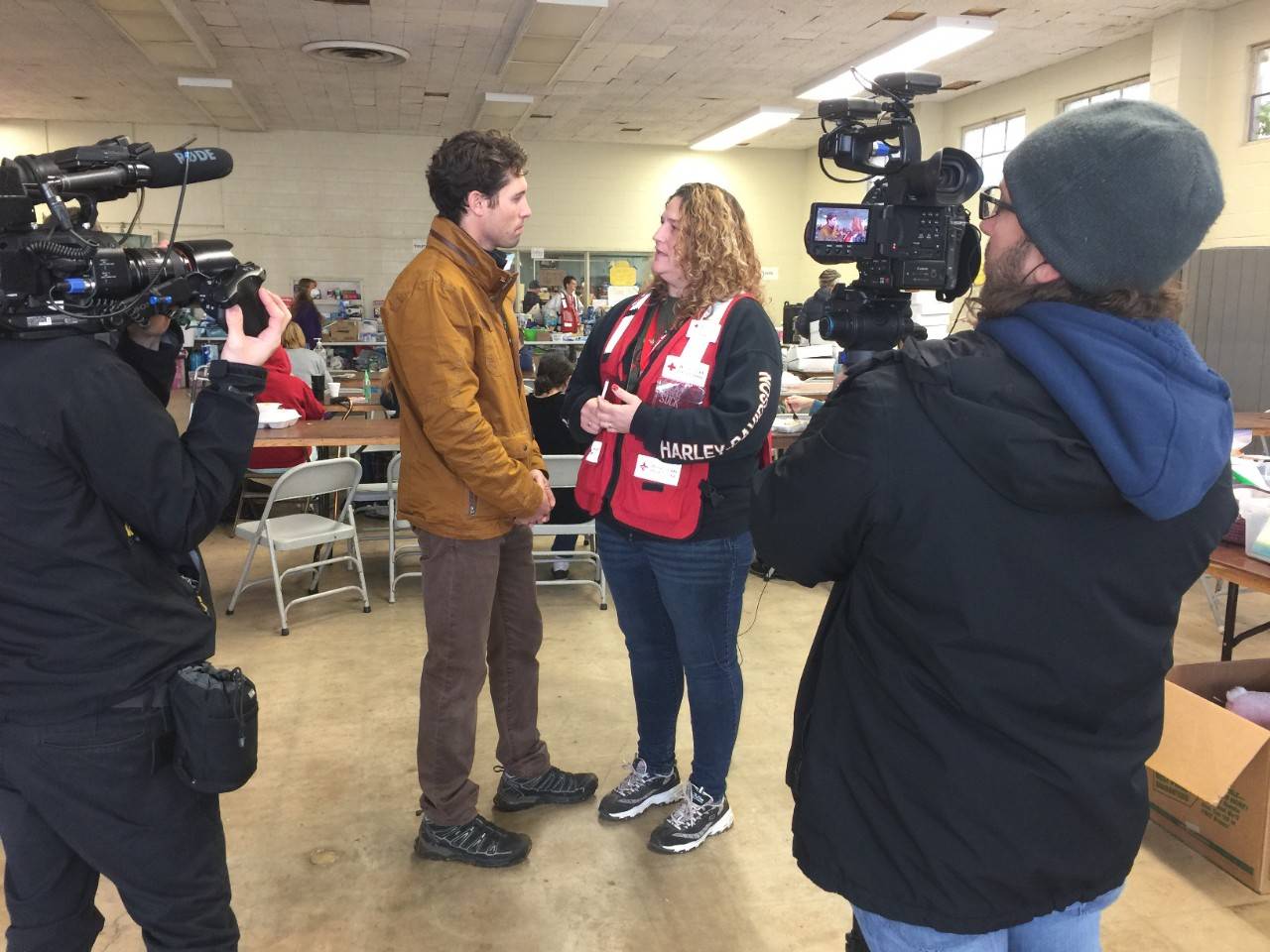 Christina Sanders, a supervisor at the Red Cross shelter in Gridley, CA, is interviewed by Louis Burgdorf, a correspondent with MSNBC’s Morning Joe.

More than a thousand missing.  A death toll already in the 70s.  Many thousands more homeless – where they lived was now ash and rubble.  This was a different kind of disaster than the hurricanes and tornados Red Cross volunteers have faced in Georgia.

Landing in Sacramento, as part of a two-person national media relations team, it seemed foggy.  But it was smoke.  Even in the airport, 100 miles south of the destroyed town of Paradise, some people were wearing masks.  The two of us - Lori Arnold of Arkansas was my partner - also donned masks and wore them in the towns near Paradise, to which we headed.  That’s where the shelters were, and 10 days after the most destructive and deadliest wildfire in California history, volunteers in Red Cross and community shelters were caring for more than a thousand people.

The stories were heart wrenching.  “One woman walked two miles barefoot to get out,” shelter supervisor Christina Sanders of California told a reporter for MSNBC’s Morning Joe.  “Her face was covered in soot and red, and her feet were red, and she said she was fine but we called an ambulance.”  Then she came to the Red Cross shelter in Gridley.  She was in her 70s.

Danny Day, a shelter resident interviewed live by the Weather Channel, had just gotten a call from FEMA the day before about his home in Paradise.  “It was gone,” Day said.  But he was grateful to have escaped with his life – and thankful for what the Red Cross had done for him.

One of the saddest sights in shelters was the area where notices seeking the missing were posted.  One shelter had a big board outside, covered with lists.  The Red Cross was encouraging everyone who evacuated to register on its Safe and Well website (safeandwell.org), and by the time we left more than 1,900 people had found their loved ones through the site.  They could also register in the shelters.

It was just before Thanksgiving, a time to be home with family, and that added even more emotion.  Through the generosity of our partners, every shelter resident would receive a catered Thanksgiving meal, a small but important gesture considering what they had been through.

The Red Cross volunteers I spoke to were taking the holiday in stride.  “I’ll miss my family – but this is my family too,” said caseworker Sandy Hoogeboom, who came from Grand Rapids, MI.

What everyone from Paradise was waiting for was the lifting of the evacuation order, so they could return and see what was left of their homes and lives. The Red Cross would be there too – with mental health and spiritual care, health services and much more.  Those volunteers had already made 19,000 contacts.

As usual in a disaster, the Red Cross would distribute emergency supplies too.  But these kits would be different than those volunteers in Georgia have passed out.  We saw a warehouse full of them, ready to go.  The kits included eyedrops, cough drops and a box containing 20 N95 smoke masks.

The fire was still burning.

Flu Vaccine and Blood Donation Both Help Save Lives
.type=article.p=1
View All
/content/redcross/en/local/georgia/about-us/news-and-events/news/california-wildfires