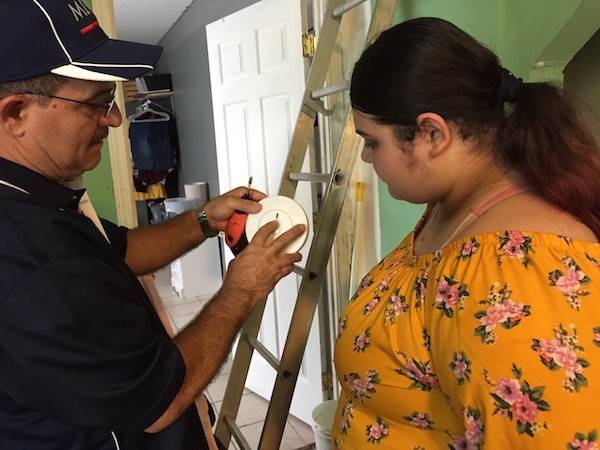 Lakeview Estates is a large, aging mobile home community in rural Conyers, Georgia with narrow winding roads and fenced yards, many with cheerful flowerbeds. Some dogs wander freely – an occasional chicken, too – while others put visitors on notice from behind locked gates. Few of the hundreds of homes there had working smoke alarms until Georgia’s final Red Cross Sound the Alarm Campaign event on May 11th, in partnership with Rockdale County Fire Rescue.

Lucky for us, nearly 100 volunteers from non-profit MIRA USA were on hand to help knock on doors, install free smoke alarms and educate the largely Latino population of Lakeview Estates about home fire safety - in Spanish. MIRA, which loosely translates ‘Hey, look” or “Listen up,” is the perfect name for this organization active in 16 major cities, including Atlanta. Their mission, to promote society’s well-being, aligns well with the Red Cross and members quickly raised their hands to help save lives at Sound the Alarm events from New York to Tampa to Houston.

Solangie Castaneda, Communications Director for MIRA USA-Atlanta and a native of Spain says their 200 members come from diverse backgrounds.  Our members are committed,” she said. “They are always alive and share the feeling of wanting to help.”

Atlanta MIRA Director Maria Quintero helped check her volunteers in at the Sound the Alarm registration table and assigned them to more than two dozen teams consisting of smoke alarm installers, educators and data recorders. The 13-year veteran had just one word when asked how she felt about her blue-shirted army of humanitarians assembling to volunteer for the Red Cross – “Happy.”

In Conyers and 13 other communities statewide, hundreds of community volunteers and partners like MIRA helped make our grassroots Sound the Alarm Campaign a success again this year. They installed 3,400 free smoke alarms in more than 1,700 homes between April 20th and May 11th and potentially saved countless lives.

We couldn’t have done it without them.

Flu Vaccine and Blood Donation Both Help Save Lives
.type=article.p=1
View All
/content/redcross/en/local/georgia/about-us/news-and-events/news/dozens-of-mira-usa-atlanta-volunteers-help-the-red-cross