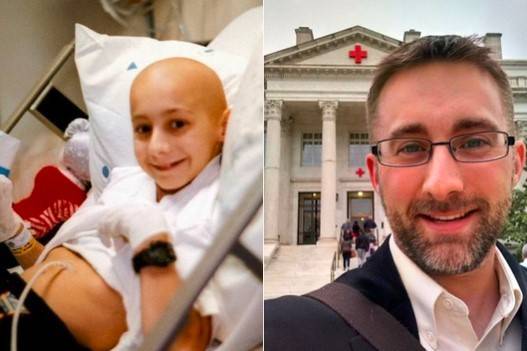 Joey Tripp, surviving cancer in 1996 and at the American Red Cross National Headquarters, earlier this year.

While his classmates were finishing their last few weeks of the fourth grade, Joey Tripp was diagnosed with Osteosarcoma—bone cancer. It would be another seven years until he would attend a full year of school, again.

It all began on a normal Sunday in 1995. Joey was with his family at church when the pain in his leg became overwhelming and forced the, then, 10-year old boy to tears. His parents immediately drove from where they lived, in Yonker, GA, to the emergency room in Macon, GA. The diagnosis was not only hard to swallow, but also hard for anyone, let alone a 10-year-old, to understand. The months and years that followed were unimaginable. Joey’s life became full of lengthy hospital stays, intense treatments, long periods of time away from other children, surgery after surgery after surgery (Joey’s had 45, to date) and many blood transfusions.

“When I was fighting cancer I was isolated, I was immunocompromised, I was young and alone—except for my mom who slept countless nights on a cot, right in my hospital room. Every time I was in the hospital, she was basically in the hospital, too.”

Often, Joey needed platelets. And, because the hospital in Macon did not have the specialty blood that he needed, he and his mom would drive the two and a half hours from Yonker to Atlanta, for treatment.  On one horrific occasion, a snow storm shut down the interstate, causing the trip to take much longer than usual. Badly in need of a transfusion, Joey passed out in his mom’s car and did not wake up until he was in the hospital—well after his treatment had begun.

Today, thanks to his own courage, the skill of his doctors, the endless love of his family and the life-saving treatments he received, Joey is not only alive, but a thriving member of the community. He holds three college degrees (including a master’s degree from the University of Georgia), he has been recognized on multiple occasions for his volunteer work and he gives back every day at his job, as a Donor Relations Officer with the American Red Cross.