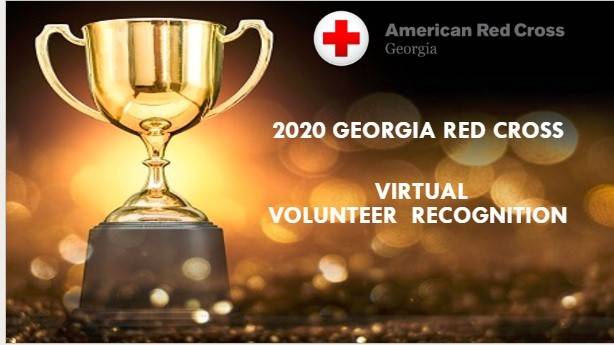 
ATLANTA, July 30, 2020  — The American Red Cross of Georgia will honor volunteers across the state during its first-ever, virtual recognition event on July 30, 2020.

The annual event is usually held in person and hosted by the eight Red Cross chapters in Georgia but will be streamed online this year as a statewide celebration due to COVID-19.

“Our volunteers are crucial to our mission,” said Jennifer Pipa, CEO of the American Red Cross of Georgia. “It’s so important that we thank them and recognize their contributions to our organization and those we serve, even if that looks a little different this year.”

The event will recognize the 4,229 registered Red Cross volunteers in Georgia, and the 374,102 hours they served in the fiscal year 2020. Their donated time, valued at twenty-five dollars per hour equates to an amazing 9.7 million dollars in services that helped prevent and alleviate human suffering in local communities.

The following volunteers and partners, nominated by their peers, will be honored for their outstanding contributions to Red Cross during the virtual event:

Blood Drive Coordinator of The Year

Presented to a volunteer who fosters innovative relationships between his/her organization(s) and the Red Cross and contributes to priorities of safe blood products and a strengthened blood program.

Blood Services Volunteer of the Year

Presented to a Blood Services volunteer with exemplary leadership skills who have volunteered for at least one year and made an outstanding contribution to Blood Services and the community.

Presented to a sponsor group that has run at least 3 blood drives and collected 50-100 pints per drive.

Recognizes a board member who has provided significant and outstanding service on the Red Cross Board of Directors, contributing to the success of the local chapter.

Presented to a Disaster Action Team (DAT) member who has gone above and beyond when called to respond in the past year and shown standout performance in willingness to serve clients.

Presented to a two-plus year volunteer who shows exceptional initiative in identifying and/or meeting the Disaster Cycle Service Recovery mission. The recipient demonstrates skills for recruiting, motivating, and coordinating others in support of Red Cross casework and displays cultural awareness, sensitivity, and creativity in reaching diverse groups.

Presented to a two-plus year volunteer who demonstrates exceptional initiative around the Disaster Cycle Services Preparedness mission. Recipient encourages collaborative relationships with other Red Cross and community partners to develop creative solutions to meet preparedness goals, and leads the way for enhanced preparedness in our communities, resulting in more efficient disaster response.

Rookie of the Year Award

Recognizes a new volunteer who has shown outstanding performance in their volunteer role during their first year.

Service to the Armed Forces Award

Presented to a volunteer who demonstrates innovative and extraordinary efforts in meeting the needs of Red Cross Armed Forces customers served at the local, national, or international levels. Recipient’s performance and collaboration reflect positively on the Red Cross, heightens the commitment of others to the Service to the Armed Forces program, and advances the organization's goals for diversity.

Demonstrated exceptional performance and extensive personal commitment to a specific service or project that has contributed to the improvement or expansion of Red Cross services to the community.

Presented to a volunteer who has sustained outstanding leadership for a number of years while meeting increasingly challenging responsibilities and advancing the organization's goal of achieving the total diversity of our people, programs, and services.

Presented to a volunteer with exceptional skills in recruiting, motivating, and/or coordinating employees, volunteers, or groups in sufficient numbers to support Red Cross readiness while helping to ensure that our workforce is growing more reflective of the communities it serves.

Presented to a volunteer between the ages of 14-24 who have volunteered with the Red Cross for at least two years and has a strong track record of leading and inspiring fellow volunteers, creating a positive impact on the community, and exemplifying dedication to the Red Cross mission.

Our highest honor presented to a volunteer who has served in a number of leadership positions over the years, lending their personal expertise to help the Red Cross contribute valuable services to the community. The recipient demonstrates leadership in identifying and assessing organizational concerns; implementing effective solutions and providing constructive guidance to the Red Cross workforce.

More volunteers are always needed to carry out the Red Cross mission. Anyone interested in becoming a Red Cross Volunteer can visit redcross.org to learn more about volunteer opportunities and how to submit a volunteer application.