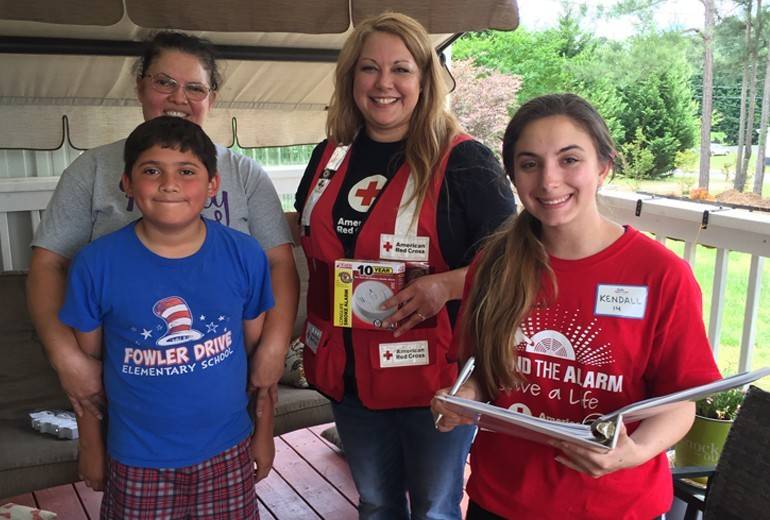 Clayton, GA, July 12, 2019 — For an organization passionate about reducing home fire deaths and injuries, the American Red Cross ended its fiscal year on June 30th with some exciting news. Thanks to the help of local volunteers and partners like the Rabun County Fire Department, more than 10,000 free smoke alarms were installed in Georgia homes over the past 12 months. Families at risk statewide – dozens in Rabun County alone – also received safety information and help creating home fire escape plans.

“We couldn’t be more grateful to the Rabun County Fire Department and the American Legion for their support for our Home Fire Campaign last month,” said Maron Trone, Executive Director for the Red Cross of Northeast Georgia. “Working together, we truly made a difference for our neighbors and potentially saved lives.”

Undeterred by pouring rain, two dozen Red Cross volunteers led by Matthew Akins and representatives from the Rabun County Fire Department and American Legion knocked on doors in Mountain City on June 8th and were welcomed by about 50 families. They installed free, 10-year battery smoke alarms and educated families on home fire safety. Firefighters followed up with residents who were not at home, bringing the total of alarms installed through campaign efforts to 158.

“We have always been proud to work closely with our local Red Cross volunteers in Rabun County,” said Assistant Fire Chief Justin Upchurch. “With their Home Fire Campaign, they are reaching out to communities like ours to provide proactive ways to save lives and anytime you have local organizations teaming up, it’s a win-win for our county and the people that live in it.”

The American Red Cross responds to about 62,000 disasters a year, most of them home fires. More than 600 lives have already been saved, nationwide, thanks to smoke alarms installed as part of the Red Cross Home Fire Campaign.

Fire prevention is a cornerstone of Rabun County Fire Services,” added Upchurch. “I would like to personally thank the American Red Cross and the American Legion for their partnership in making our county a safer place to live.”