Donate Now
Home
Local
Massachusetts
About Us
News and Events 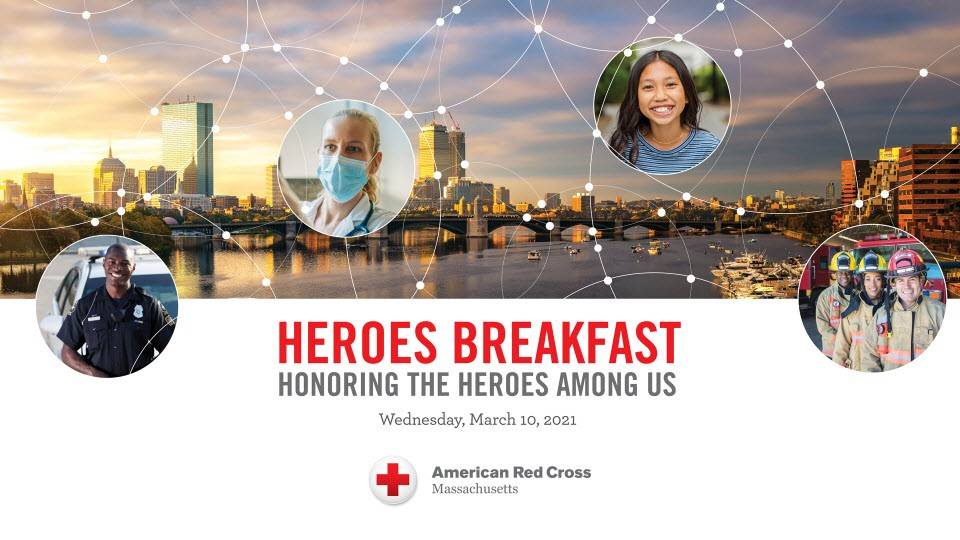 On the first anniversary of the pivotal moment in Massachusetts history, when Governor Baker called on all nonessential business to shut down as a result of a worldwide pandemic, the American Red of Massachusetts honors its heroes.  President and CEO of Putnam Investments, Robert L. Reynolds, chairs the inaugural event, Heroes Breakfast Boston, on Wednesday, March 10, 2021.

The virtual gathering will consist of awards in ten categories, including Global Citizen honoring the work of Boston’s scientific community and the lifesaving vaccines that were born and bred right here in Massachusetts.  Other categories include: blood services, community impact, emergency professional, firefighter, good Samaritan, law enforcement, military, nursing and youth.

“After a year like no other – a country facing a deadly pandemic, record-setting natural disasters, and civil unrest, the year ahead remains uncertain” said Holly Grant, CEO of the Red Cross of Massachusetts. “Amid these challenging times, the Red Cross remains on the frontlines bringing help and hope to families who need it most. But we are not alone. There are heroes among us who exemplify the humanity and volunteer service of the Red Cross and are serving their community. We debated whether this was the year to launch such an ambitious event – but after the events of the last 12 months, we realized it was needed now more than ever.”

“Whenever I think of help, whenever I think of hope, I think of the American Red Cross,” said Robert L. Reynolds, President and CEO of Putnam Investments. “When I was approached to chair the Heroes Breakfast Boston, the answer was without hesitation – yes. If there were ever a time to honor people who have given so much during the pandemic and beyond, it is now. I stand in awe of the heroic acts and the contributions of each of these honorees and I am proud of the local busines community who has supported these efforts.”

The Red Cross is proud to welcome the Boston NBC and Telemundo Owned Stations as the official multi-media partner for this event. NBC10 Boston and NECN News Anchor, Melody Mendez will serve as the virtual event Emcee. A diverse council of civic and community advocates led by Boston Athletic Association Chief Executive Officer Tom Grilk evaluated more than 130 worthy submissions.

The Heroes Breakfast Boston is free to attend and will be held virtually on March 10, 2021 beginning at 8 a.m. To register visit: https://www.redcross.org/local/massachusetts/about-us/news-and-events/events/boston-heroes-breakfast.html

Mr. Reynolds has more than 30 years of investment and financial services experience and is a member of Putnam Investments' Executive Board of Directors. In addition to his roles at Putnam, he is Chair of Great-West Lifeco U.S. and is regarded as a driving force of innovation and progress in institutional and retail financial services.

Founded in 1937, Putnam Investments is a global money management firm with over 80 years of investment experience. At the end of January 2021, Putnam had $190 billion in assets under management. Putnam has offices in Boston, London, Frankfurt, Tokyo, Singapore and Sydney. For more information, visit putnam.com.

Owned by NBCUniversal, NECN serves as the largest 24-hour regional news network in the U.S. Since its launch on March 2, 1992, NECN has grown to include 3.6 million subscribers in more than 1,050 cities and towns throughout all six New England states. NECN has established itself as an industry leader as the only cable television news station to earn a George Foster Peabody Award and the Alfred I. DuPont – Columbia University Broadcast Journalism Award, among many other accolades. On January 19, 2020 NECN relaunched its entire network targeting a new audience- millennial women 25-40. As a digital first network, NECN has changed the way it delivers news, entertainment, and lifestyle content across all platforms.

Melody Mendez joined NBC Boston in the spring of 2016. Her career as an award-winning anchor and reporter has taken her to cities across the country over the last decade, from Jackson, Tennessee to Champaign, Illinois and Seattle, Washington, to Denver, Colorado and most recently, Chicago. She has covered major stories across the country, like Hurricane Katrina and the Aurora, Colorado theater shooting. She is a member of the National Association of Hispanic Journalists and the Society of Professional Journalists and an active volunteer with several organizations including the American Cancer Society and Special Olympics.