One day in May of 2019, Jane Barton helped to sustain the life of her mother who was choking and fell unconscious at a restaurant. Jane was dining out with family when she observed her mother appeared to be in distress after eating a piece of meat. Jane stood up from the table and went behind her mother. Jane started to administer abdominal trusts. After several thrusts, the obstruction was partially cleared and then her mother fell unconscious. Jane conducted a finger sweep and removed the obstruction from her mother’s airway and moved her mother to the floor and reassessed. Jane initiated chest compressions as Emergency Medical Services arrived and continued to provide care. Jane’s mother recovered.

For this act, Jane Barton has been awarded the American Red Cross Certificate of Extraordinary Personal Action. This award is given to individuals who step up in an emergency situation and help save or sustain a life. These individuals exemplify the mission of the Red Cross to prevent and alleviate human suffering in the face of emergencies. They are to be commended for their willingness to help others in distress.

On October 3, 2019, Caitlin Kotz and her mother Lisa Kotz, both trained in American Red Cross Basic Life Support for Healthcare Providers and Basic Life Support respectively, helped to sustain the life of a woman who was choking at a Visiting Nurse Association rummage sale in Far Hills. Caitlin and Lisa were volunteering at the event when they noticed a fellow volunteer was in distress. Caitlin alerted the event staff and helped to clear the area. Lisa went to the volunteer and confirmed the woman was choking. Lisa started to administer abdominal thrusts. As Caitlin watched her mother administer abdominal thrusts, she began to plan and prepare just in case CPR was needed. After the 10th abdominal thrust, the woman expelled the piece of food that was obstructing her airways. The woman was once again able to breathe.

Without a doubt, the skills Caitlin and Lisa learned in the American Red Cross Training Services courses helped to sustain the life of this woman. Their actions exemplify the highest degree of concern of one human being for another who is in distress.

Red Cross training in skills such as CPR, first aid and use of an AED gives people the know how to act in an emergency and save lives. When people use these skills to help save a life, the Red Cross recognizes not only their efforts, but their pure willingness to help others in a critical time of need.

The first was awarded 1911 in recognition of first aid work rendered by railway men who helped save a life. From 1911, thousands of awards have been issued to individuals who have saved or have sustained a life, many as a direct result of American Red Cross Training Services programs.

If you or someone you know has used skills and knowledge learned in an American Red Cross Training Services course to help save or sustain the life of another individual, you can visit LifesavingAwards.org to nominate, recognize, or be inspired. 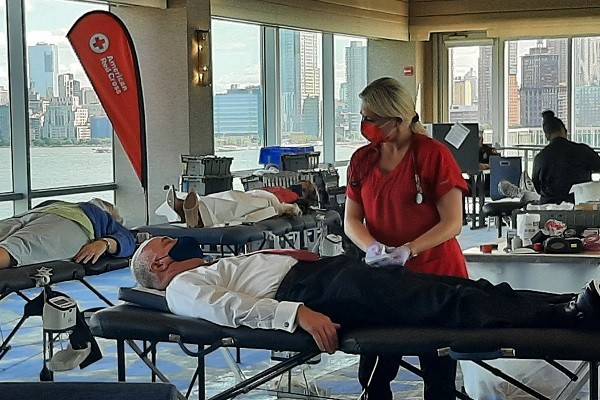