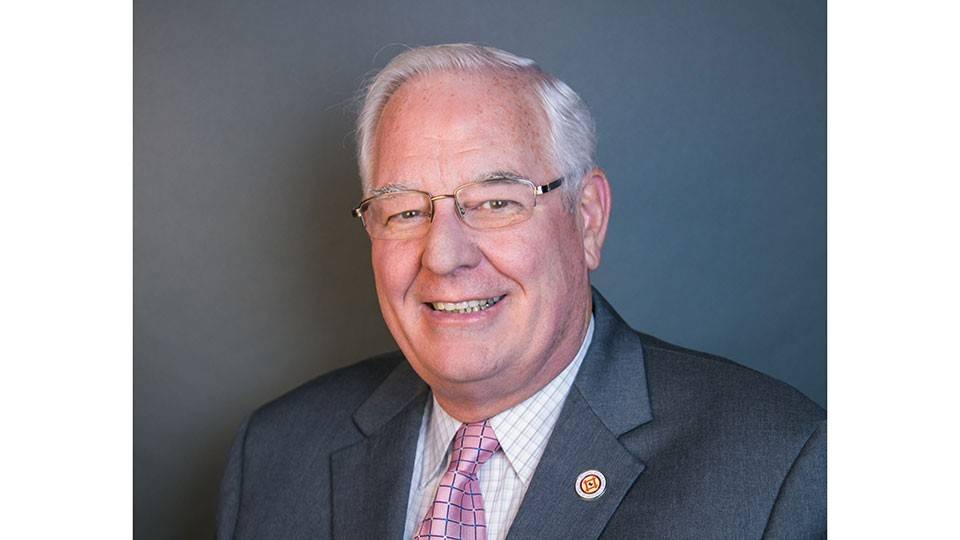 Red Cross volunteer E. Tracy Beckette prefers to be called by his middle name, Tracy. His military experience began with his Army ROTC commission in 1971, during the Vietnam war era. He was on active duty from 1973 to 1975. Tracy then spent the remainder of his military career, from 1975 to 2005 in the Missouri Army National Guard in positions of increasing responsibility, retiring with the rank of Brigadier General.

Today, Tracy continues his service to his country through the Red Cross, volunteering as a member of the Board of Directors for the American Red Cross in Greater St. Louis. The board is engaged in supporting the Red Cross in carrying out its mission through programs including disaster operations, blood services, Service to the Armed Forces, CPR and First Aid training and supporting specific campaigns to help the organization raise support from financial donors, blood donors and community volunteers.

Before retiring from the military, Tracy’s most prominent assignment was his two tours as the Brigade Commander, 35th Engineer Brigade with headquarters at Ft. Leonard Wood, Missouri. He conducted mission assignments in Korea, Japan, Central America, and Puerto Rico, as well as many locations within the United States.

As a combat engineer while stationed in various locations, Tracy was often involved in assignments while also conducting training as a combat engineer. Many assignments included civil engineering work such as building roads, bridges, clinics, and sometimes flood walls during disaster flooding. He did not engage in combat operations, yet he prepared soldiers for war in combat engineering tasks such as demolitions, convoy security, mine and countermine warfare, river crossing operations, road and airfield repair, bridging operations, and infantry tactics. His favorite project was titled "Alaska Road" which involved building a 14.5-mile road over mountainous and rough terrain that allowed Native American children and their families on Annette Island to travel safely to warmer inlet waterways rather than travel the more dangerous and colder route on the Pacific Ocean. The work was both dangerous and time consuming due to the terrain and extreme weather conditions, which only allowed for 90 days of work per year.

Tracy has lived all his civilian life in St. Louis, Missouri. He is 72 and has been married to his wife Cathy since June of 1972. For twenty-five years Cathy was an employee of Red Cross and the National Testing Laboratory in St. Louis, retiring in 1996 as the Quality Assurance Officer. Tracy and Cathy have four children and five grandchildren.

Tracy received his BA in Political Science at St. Louis University, and later completed his MBA at SLU in Business Administration. He is also a 1968 graduate of the Army War College. Simultaneously with his military career, he became a St. Louis banker. In July 2016, he retired from a 45-year career as a retail banker and commercial Chief Credit Officer.

“Being a Brigadier General in the Missouri Army National Guard was one of the tripods of my life,” Tracy recalls, adding that the other two legs were providing professional service throughout his banking career and being a loving husband and father to his family. From a military perspective, he was constantly on call at the state and national level for training, various missions and special duties.

Regardless of the type of the military assignment, Tracy said he “loved the constant change and challenges… my military career taught me how to operate under pressure, task organize, take responsibility for my actions and decisions, and motivate subordinates with a 'can-do' attitude."

As a combat engineer senior leader, it was his responsibility to train his staff and engineer units to operate in a wartime environment such as the conflict in Iraq. In training units, he always stressed the importance of training to meet and then exceed the training standards. His operating motto was "Failure is Not an Option".

One of the drawbacks of being a combat engineer for Tracy was the time away from home and the limited communication he had with his loved ones and friends. "Those were the days before much use of the internet or cell phones,” he says. When he was in the Honduran jungle and Korea "there were long periods of time when I was not able to talk with my family."

For all the years that he served, he notes that his guidelines were “To live the Army Values (Loyalty, Duty, Respect, Selfless Service, Honor, Integrity, and Personal Courage), understand host country operating rules, implement the senior commander's intent, mission accomplishment, soldier care, and when necessary follow the rules of engagement and the Law of Land Warfare.” He spoke of developing friendships all over the world in his service as an engineer and with the committees he served. In all his service time, he says, "there was a sense of belonging and purpose to my life."

In his retirement, Tracy participates in numerous memorials and Veteran wartime commemorations. Last year, he attended the 75th D-Day Remembrance Ceremony at Jefferson Barracks National Cemetery to commemorate, pray, and give thanks to soldiers and their families at graveside dedications, alongside representatives from the 101st Airborne Division, England, Netherlands, France, and Belgium. He also spoke at the YMCA Volunteer 175 ceremony to honor our Veterans where over 300 young people put flowers on the graves of Veterans during the memorable service.

Tracy says memorials and commemorations he attends are “…moving experiences that cause me to reflect on my heritage." He adds that he feels “humbled and honored to serve soldiers and veterans." He remembers one jaunty veteran in a wheelchair who served on D-Day with the 101st Airborne who told him that if he "was asked to parachute..." he "would proudly jump again if the boys wanted me to!”

Tracy now voluntarily serves as the Civilian Aide to the Secretary of the Army (CASA) for eastern Missouri where he works to enhance the relationship between the Army and the civilian community. He speaks to community and Veterans organizations like the Chamber of Commerce, Kiwanis Club, and the American Legion, providing updates on Army goals and priorities as well as key issues impacting the Army, like Army recruiting, readiness, and Covid-19 response.

Tracy says in the military, he was "not affected physically, but was affected mentally." He learned values of sacrifice, selfless service, and discipline as he developed an acceptable "life balance" as it related to God, family, his civilian banking career, and National Guard duties. He routinely was "...challenged to adjust to family responsibilities, business demands, and deployment activities/training intensity with its excitement and dangers."

One of the worthwhile aspects of military service is learning "the importance of taking care of each other (that) never ends." Tracy asserts that he “has a burning desire to always serve (soldiers and Veterans) by addressing their needs with family and soldier transitions,” such as to and from deployment.

A few years ago when he retired, he felt he was "not ready to stop" and so he has continued to focus his passion for working with soldiers and Veterans, because he is a "Soldier for Life."

Tracy cares and continues to serve these valued military individuals, helping them “to continue to love their country, state, and locale while striving to successfully reach their goals.”

Thank You for Your Support
.type=article.p=1
View All
/content/redcross/en/local/arkansas/about-us/news-and-events/news/retired-brigadier-general-volunteers-as-red-cross-board-member-t