Through Personal Experiences with Red Cross 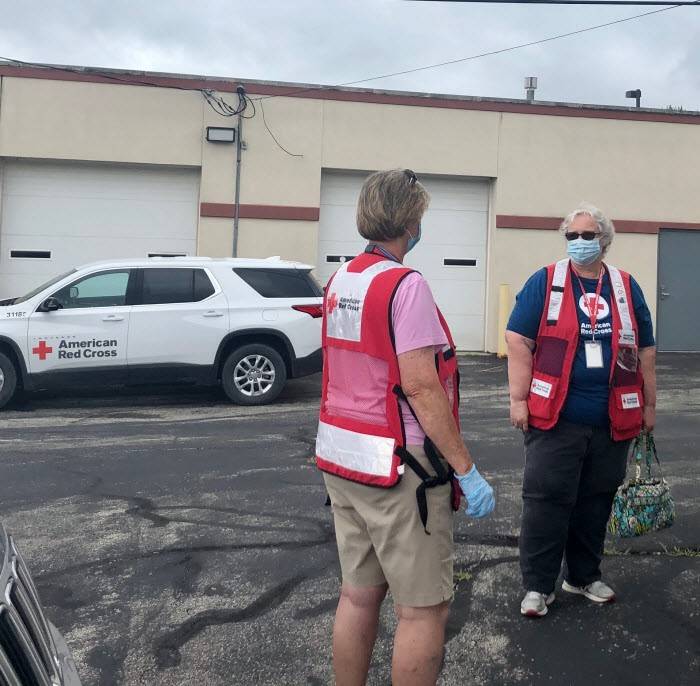 Debbie Consolver joined the American Red Cross in 2018 after 26 years in the St. Joseph School District.  So why did she decide to volunteer?  As it often happens, it was the result of something that touched her personally.  Her daughter and grandchildren were asleep in their home one night when a fire broke out.  Her young grandson heard the smoke alarm, wakened his mother and baby brother and the family escaped safely.  Not long before that event, the American Red Cross had presented a fire safety program, Sparky the Fire Dog, to the school Debbie’s grandson attended.  After that presentation, the young boy decided he wanted to become a fire fighter.  Today Debbie has her family, a grandson who is a Fireman, and is a member of the American Red Cross volunteer team in St. Joseph.

Debbie Consolver’s strong ties to the St. Joseph community makes her invaluable to the American Red Cross, especially during disasters such as this July’s devastation floods.  On July 20th, after a night of heavy rains, a 9am call had her racing out to investigate the magnitude of the flooding, meet with Emergency Management and set Red Cross response into motion.  Since then, she has been working tirelessly and non-stop pulling together partner agencies and volunteers to serve and assist her community recover.

When asked how this event has affected her, Debbie said, “Being able to help the people, fills my cup.”  It has given her great satisfaction to see the ‘community come together as a unit’ and do what is best for the flood ravaged area and the residents.  One such instance she relates, “I met a minister from a church who wanted to help.  Then I came across a client who had lost her home and car and had no way to and from work.  I contacted the minister who had offered to help.  The very next day that minister called with the news that a member of his congregation had a car to donate!”

“To witness someone’s desperate need be fulfilled by the generosity of an anonymous donor is overwhelming and gratifying. It touches my heart deeply,”