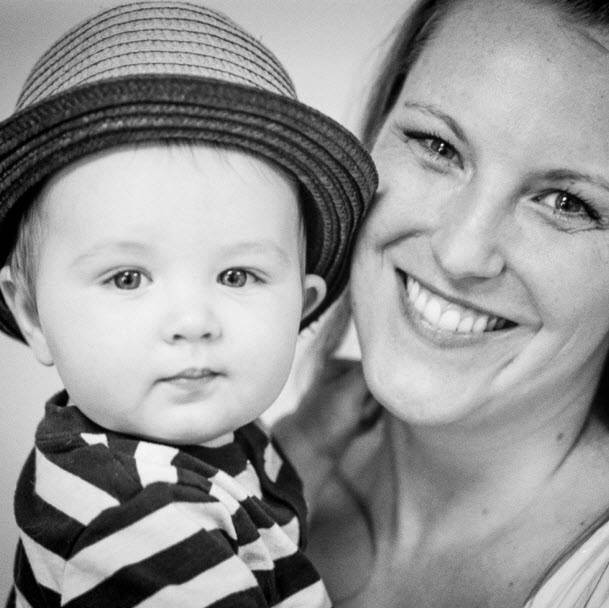 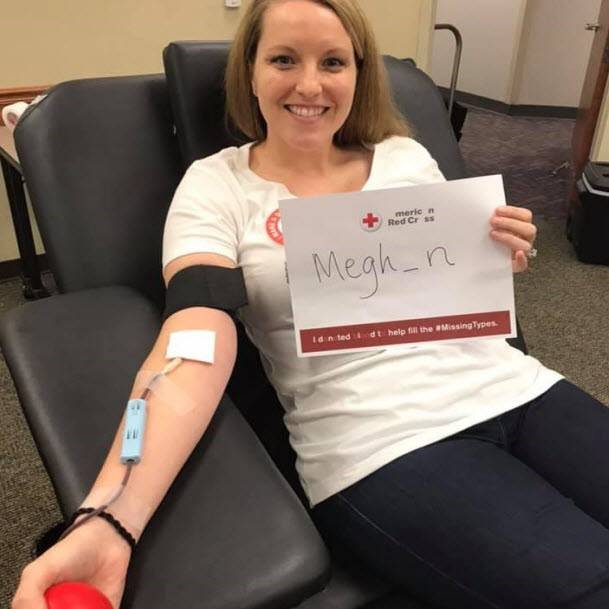 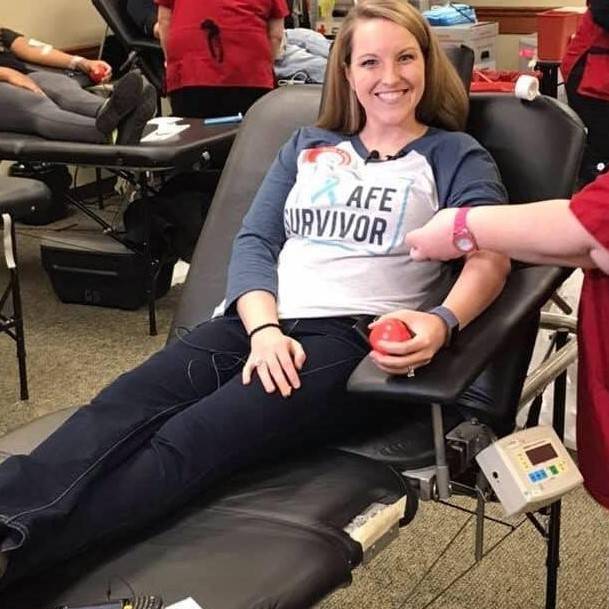 When Meghan Jolliffe began donating blood while still in high school, she knew it would help somebody she would never meet. Little did she know that one day she would be "somebody" needing a transfusion—a whopping 109 units that saved her life.

In February of 2018 she suffered an amniotic fluid embolism (AFE) during childbirth. Her vital signs collapsed, her organs shut down, and her heart stopped for fourteen minutes. Finally stabilizing after seven hours and a massive transfusion, she entered a dark period of weeks she can't even remember. A long rehabilitation followed, which included learning to walk again, because of extensive nerve damage.

Enjoying life today as the mother of a healthy son, she expresses her gratitude by hosting American Red Cross blood drives across the Kansas City metro area. She has already more than replaced the units she received, but continues expanding her network of donors to accomplish even more.

“I hosted my first American Red Cross blood drive on AFE Awareness Day, a little over one year after the birth of my son," she recalls. It quickly became clear that her story put a face on the call to action and she expanded her efforts to capitalize.

One woman donating blood for the first time said, "I saw you on the news, and I had been looking for a way to remember my father on the anniversary of his death.” She and other members of her family had gathered to donate blood and honor their father’s memory.

Meghan serves as more than a passive host. She greets each donor to say, Thank you, and thinks of them as stand-ins for the anonymous donors who helped saved her life.

“I answer questions when they are donating blood and try to make it human. Some say they are scared, others are afraid of needles.” So she holds their hands during the process to make a personal connection. She has learned the art of making small talk to distract their attention the moment the needle goes in. She asks them about their families, about what makes them happy.

Sometimes she asks for one good quote about why they feel donating blood is important. She then snaps a photo with her phone and, with their permission, later uses that photo and quote to create a simple meme to post online and promote the next blood drive.

“The more personal stories you can get, the better,” she advises. Admitting it all seemed a little intimidating at first, she quickly found that using social media platforms makes networking simple and effective. Simply spreading the word to fifty friends and family members usually results in at least a dozen or so who will show up to donate. But Meghan's events usually exceed those numbers. Early on she set a goal to collect 109 units in one day, enough to replace those that saved her life. She achieved that goal at a blood drive in Overland Park.

“The American Red Cross makes it so easy. All you have to do is find a suitable space and provide a minimum number of people. : They take care of the rest.” The host can be as hands-on or hands-off as they want; the Red Cross takes care of everything from creating flyers to providing advice on social media promotion, making the process seamless.

Themed events targeting a specific Facebook group have become a favorite tactic. When organizing her second blood drive, she thought of the prenatal yoga facility where she connects with young moms like herself. The owner was immediately receptive and it was a big success. “We had a lot of fun that day,” Meghan recalls,” working together toward a common good.”

Donating blood doesn't take long," she encourages. "And at the end of it you know you have really helped someone.” The doctors fighting for Meghan's life had all the ammunition they needed and held nothing back, and she wants to make sure others  get the same chance. By hosting American Red Cross blood drives she is repaying the debt of gratitude she owes—with compound interest.