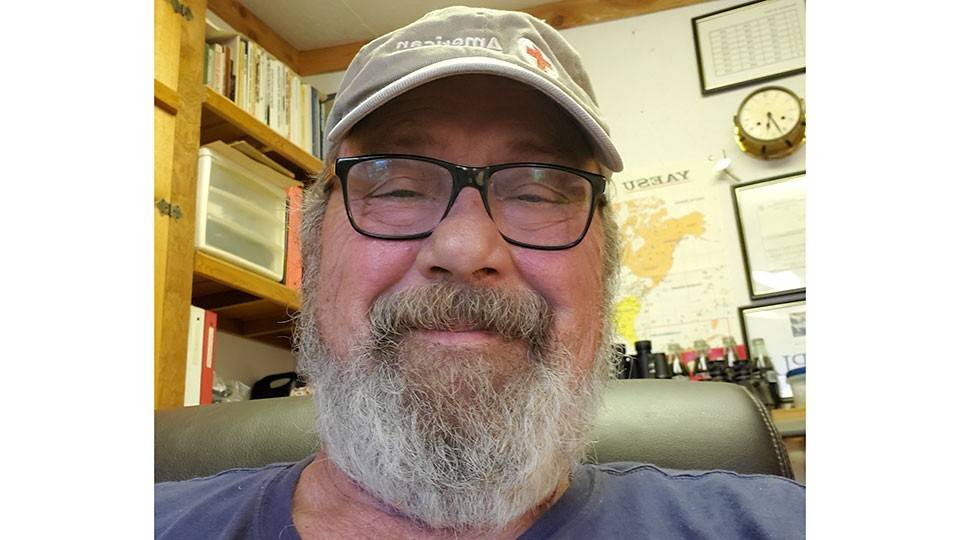 Red Cross volunteer Mike Kratchmer worked in the armed services for more than half of his life. He joined the U.S. Navy as full-time military in 1969 for almost four years, followed by eight years as an active Reservist in the Army National Guard and the Naval Air Reserve. After that he returned to active duty in the Navy and eventually retired.

Now Mike serves as a Red Cross disaster volunteer in Northwest Arkansas. He’s a Disaster Action Team (DAT) member and as a coordinator and manager for the program, responding to needs of residents who have had a home fire, or experienced flood or tornado damage.

Mike served his country on five continents while in the military, but mostly “was stationed in the U.S. in the east and southeast, and some in the west central states.” He was in Maine, Mississippi, Florida and Georgia. Overseas, Mike was stationed for six years in a Bermuda NATO base and five years in Guam. Other tours included Brazil, Argentina, the Middle East, the first and second Gulf War, Lebanon, Iceland, Saudi Arabia, and Bahrain. Mike provided combat support on many tours helping keep the sea safer for those in combat and he did surveillance of battlefields.

Although, in his words, he “never engaged in combat,” he did “rewarding mechanical, technical, electric and maintenance for large vehicles,” also working on small-to-large devices including airplanes. He achieved the rank of E6 Naval First Class Petty Officer.

Mike was born in Waverly, Ohio and spent much of his early life in Northeast Iowa, near Clarksville. He graduated from high school in 1968, and then studied for an associate degree at Northwest Community College in the aviation maintenance school, also teaching aviation maintenance.

“Public service has been the mainstream of my life,” he said.

Military participation was prominent in his family. His father was in World War II in Italy and in Korea. His brothers also served in the armed forces.

Mike says he liked being in the military, adding that he was “comfortable with the structure of the military mission order and chain of command.” In contrast, as a Red Cross volunteer there is “structure that is the basis,” but due to the nature of disasters, sometimes it is “without structure.”

One life-changing experience for Mike was during a deployment to Rota, Spain at a NATO base. He went to a USO show for enlisted men and met his wife, Tini, who is from the Netherlands.

“I fixed the transformer on the USO piano and later met my future wife at ‘John’s Two-Bit Saloon.’ She had a U.S. Visa and blond hair, blue eyes and spoke four languages,” he said.

Mike and Tini were married in Brunswick, ME in October 1972. Some suggested that the marriage “would never work”, due to “cultural differences.” Forty-eight years later the marriage is still going strong. They have one son, Michael.

Though he enjoyed aspects of the military, he did not like separation from his family. The first six months of his service, he was separated from his family and they struggled to adapt. He planned ways to make it better when he reconnected after his deployment.

“No sane person likes war, but we need defense and offense,” Mike said. “It is necessary to have a well-organized military. It is a nasty business, but someone needs to do it.”

When he was old enough, his father told him, “you may be called on to serve and die. War changes you and you need to be prepared in all manner and ways. Things happen when you least expect it, so it is easier to be prepared than to explain why not.”

When he finished serving in the military, Mike decided to continue to serve through the Red Cross and recommends others consider it as well.

“If someone does not serve through the military, perhaps he or she could be in service in other ways or by volunteering,” Mike said.

Thank You for Your Support
.type=article.p=1
View All
/content/redcross/en/local/arkansas/about-us/news-and-events/news/volunteer-joins-red-cross-to-continue-serving-his-country-after-