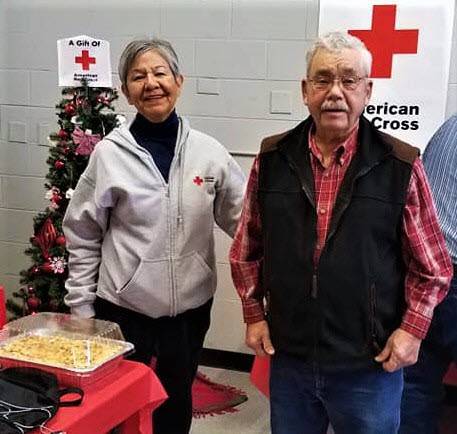 Treva and Gary Boulch enjoy gathering with friends at the Red Cross office in Lebanon, Missouri for the 2019 Christmas party.

In 2007, one of the worst ice storms in decades left Springfield, Missouri encased in an inch and a half of solid, life-stopping ice. Transformers blew up, trees under the weight of all that ice crashed across the city onto businesses, homes, cars, and power lines.

For Treva Boulch and her husband Gary, the ice was a cruel disaster that left them unprepared and without power for two weeks. At her wit’s end, Treva recalled that the American Red Cross chapter was nearby and she figured they must know what she and her husband could do and where they might shelter.

She made her way there over the slick, bone-cracking ice and found exactly what she needed. From that day when she was helped, Treva has been a Red Cross volunteer responding to human needs in disasters across the country while making friends wherever she went. Gary also volunteered for the Red Cross.

This is an autoimmune disease that inflames capillaries, veins, and arteries. It can develop blood clots that leave a person continually vulnerable to strokes. Though this condition primarily infiltrates the respiratory system, it can also percolate throughout the body, invading any vulnerable organ. That systemic invasion is what detonated inside Gary during this last year.

Gary lost his balance, hearing, and vision. In the form of kidney and heart failure, Gary suddenly encountered his mortality. He had entered that barren landscape between seeing and not seeing, hearing and not hearing, walking, and not walking. Gary penetrated that zone between life and death.

Treva,struggling under the downpour of Gary’s multiplying dangerous symptoms, doctor and hospital visits weekly in Springfield, the shock of medical bills, and needing medical equipment for Gary’s well-being and comfort, knew this time what to do.

Treva remembered talking before with Jenny Solomon of the Red Cross in Springfield regarding an alarm for people who have trouble hearing. Treva recalled a Red Cross shaker bed the hard of hearing could feel that would awaken them just as an alarm clock could wake those with hearing.

Early this September, Gary and Treva received the bed and Treva wrote a note of appreciation and thanks to the Red Cross for supplying the very thing that Gary needed.

The gift of mutual aid, care, and love didn’t stop there. After spending so much of her time reaching out to others in need in her community and across the country with the Red Cross, Treva and Gary built a dedicated group of mutual aid and love.

Treva explained that as bad as things are now, she is free of anxiety due to her strong and enduring faith that sustains her and takes care of her and Gary.

Their extended groups of mutual aid brought Gary the hospital bed he needed and the “miracle” of an air mattress. Their community also purchased a sports wheelchair and scooter on which Gary could get around. Their church family built a handicapped ramp to the front door of their home. Gary could then enjoy the spirit of making his way in and out of his house.

Treva insisted that what has helped her through good and bad times is her faith. In the end, she said the secret to staying serene in any storm is to believe.