Regional Leadership and Board of Directors 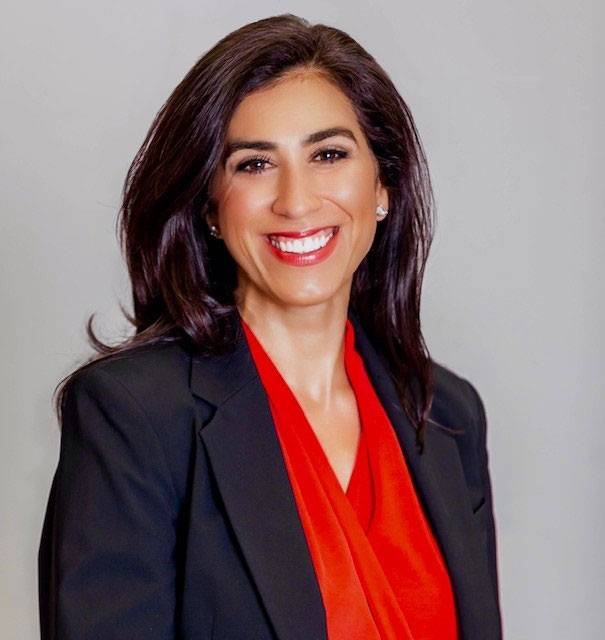 Celena Roldán joined the American Red Cross of Chicago & Northern Illinois as CEO in March of 2016. In April of 2020, she became the CEO of the new Illinois region of the Red Cross. This is the second largest region of the Red Cross, which responds to more than 1,800 disasters annually. The Illinois region covers 88 counties, has more than 3,600 dedicated volunteers and teaches health, safety and disaster preparedness skills to more than a quarter million people annually.

Prior to joining Red Cross, Roldán served as the Executive Director of Erie Neighborhood House which was founded in 1870 to strengthen low-income, primarily Latino families through skill-building, access to critical resources, advocacy and collaborative action.

Roldán has extensive and significant community development experience at both the city and the state level. In 2018, Roldán served as a co-chair for the City of Chicago Universal Basic Income Task Force. She also served on Mayor Rahm Emanuel’s Education Transition Team and the Mayor’s Early Childhood Task Force as well as Governor Quinn’s Illinois Human Services Commission. Roldán was also appointed by Mayor Emanuel to the City of Chicago’s Community Development Commission in 2014. In 2011, Roldán was a Leadership Greater Chicago Fellow, participating in an intensive leadership training and partnership-building program that examines key issues facing the Chicago metropolitan area. In 2015, she participated in the German Marshall Memorial Fellowship, a month-long leadership development program in Europe focused on supporting and fostering the transatlantic relationship between the U.S. and Europe, sponsored by the German Marshall Fund of the United States (GMF). She was selected as a Fellow in the 2017 CEO Perspectives program, a nationally recognized program that fosters and accelerates business leadership development. Currently, Roldán serves as the board chair for Illinois Action for Children. In 2016, Roldán was appointed and currently serves as a member of the national board of UnidosUS (formerly the National Council of La Raza). In 2019, she was named to the board of directors for Wintrust Wealth Management and was elected to The Robert R. McCormick Foundation Board.

Most recently, Roldán was named as one of Chicago’s “Most Powerful Latinos,” on the 2019 inaugural list compiled by Crain’s Chicago Business. In 2018, Roldán was honored by Chicago-Woman magazine with an Excellence in Leadership award. Roldán was also named by the United Way of Metropolitan Chicago as the 2016 Community Leader of the Year for her work in communities and the nonprofit sector.

Roldán holds a master's degree in early childhood administration from National Louis University, as well as master’s and bachelor’s degrees in social work from the University of Wisconsin-Madison. 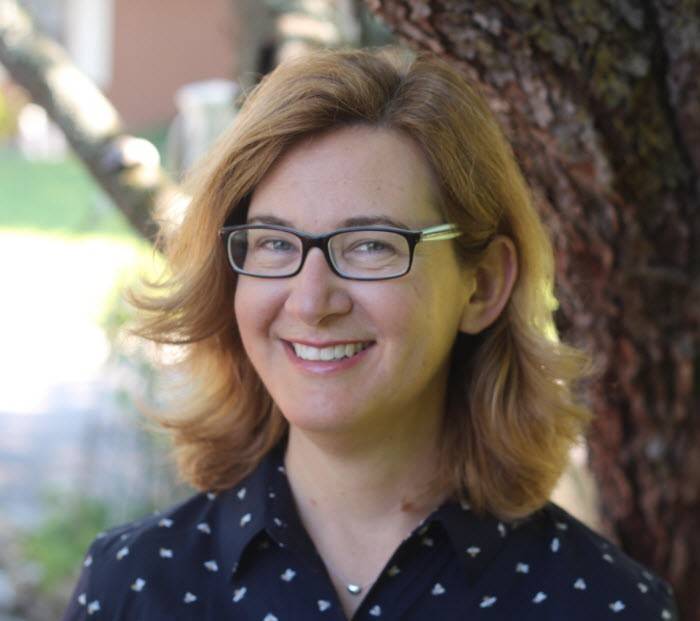 Regional Volunteer Services Officer, Kendra Henson is from Central Illinois and has been with the American Red Cross for eight years.  Kendra’s heart is drawn towards working with humanitarian organizations and has served as a medical social worker for the Vermont Dept. of Health, a Public Relations Specialist for Meals on Wheels, as well as working to support underserved populations in both Vermont and Illinois.  Kendra is proud to serve the Illinois Region as the Volunteer Services Officer and believes firmly in our incredibly giving, talented, and compassionate volunteer workforce! 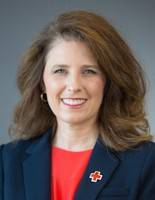 Heidi joined the Red Cross in 2001 serving in several development roles in the organization before being named CDO in 2008. She has managed direct marketing, annual giving and special events programs and has led the marketing and communications team. She launched the Heroes Breakfast which brings significant support and visibility to the Region, and is now an annual event. Before joining the Red Cross Heidi served as associate director of annual events at the Newberry Library in Chicago 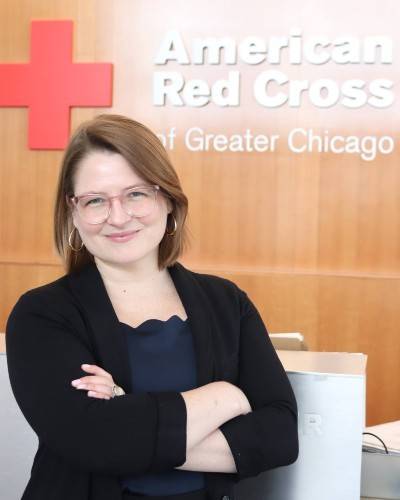 Catherine Rabenstine joined the American Red Cross in 2016 and became the Chief Operating Officer of the Illinois Region in 2018. As a Red Crosser, Cat has deployed as a Public Information Officer to support the response for Hurricane Matthew, Hurricane Irma, as well as local tornado and flooding disasters. Most recently she deployed as the Chief of Staff of the Hurricane Ida response in Louisiana. She is a member of the COO Forum, and has served on the board of Public Narrative and as a coach for students with One Million Degrees. Cat has worked in nonprofits since 2004, teaching journalism courses for a year in the West Bank, helping build a service learning and study trips program in Rome for a few years, partnering with people experiencing homelessness to help them transform their lives at Cara Chicago, teaching English for a year in southern India, and coordinating a conservation leadership training program in the Pacific NW. Cat earned her bachelor’s degree in English and Peace Studies from Loyola University Chicago, and her master’s degree in journalism from Northwestern University. 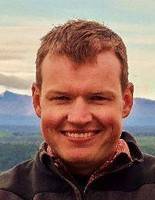 Adam Runkle joined the American Red Cross of Chicago & Northern Illinois in 2009 and served in senior management roles before being named RDO in 2018. In April of 2020, he became the new Illinois region’s Disaster Officer across an 88-county service area. In this role, Adam leads our region’s Disaster Cycle Services team across a 21-county service area. With this team, he works to strengthen the capacity of the Red Cross in all aspects of the disaster cycle, from preparedness to response to recovery. Adam came to our region from California where he was the Planning & External Relations Manager for the Greater Los Angeles Region from 2008-2009. Prior to his work in LA, Adam was with the American Red Cross based out of New York City from 2006 to 2008. His service dates back to 2005 when he found his passion for the Red Cross as a volunteer supporting families affected by Hurricane Katrina. During his time with the Red Cross, Adam has helped lead dozens of relief operations across the country and currently serves as a Deputy Director on the Divisional Response Management Team for the North Central Division. Most recently, he served as the Deputy Director for the statewide response in Florida following Hurricane Irma. Here at home, Adam has been the job director for numerous relief operations which included responses to historic flooding, tornados, winter storms, mass casualty events, and more. Over the course of his career he has also responded to hundreds of home fires and has managed over fifty emergency shelters. Before joining the Red Cross, Adam worked with the Southeastern Alaska Guidance Association where he led team of AmeriCorps volunteers on remote conservation projects with the US Park and Forest Services. 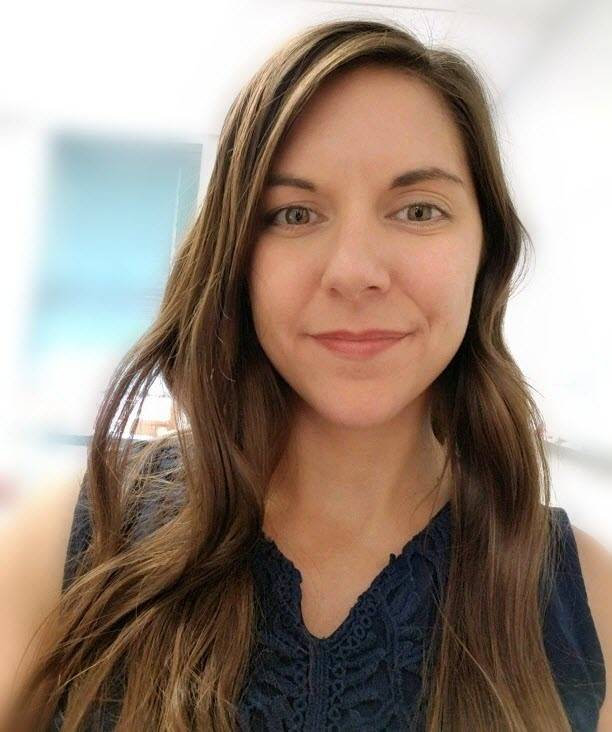 Crystal joined the disaster team at the American Red Cross in 2014 and became the Service to Armed Forces & International Services Director in 2016. In this role, she oversees the SAF and IS programs throughout Illinois. Crystal manages a team that provides outreach, emergency communications, and resiliency programs throughout the region. Additionally, she works closely with the Illinois National Guard to provide support to military members and their families throughout the deployment cycle. She has helped facilitate and launch networking groups for organizations supporting military and veterans throughout the state.  As the Disaster Program Manager in Central Illinois from 2014-2015, Crystal managed relationships with community partners, assisted with community disaster planning, and oversaw disaster responses throughout Central Illinois. 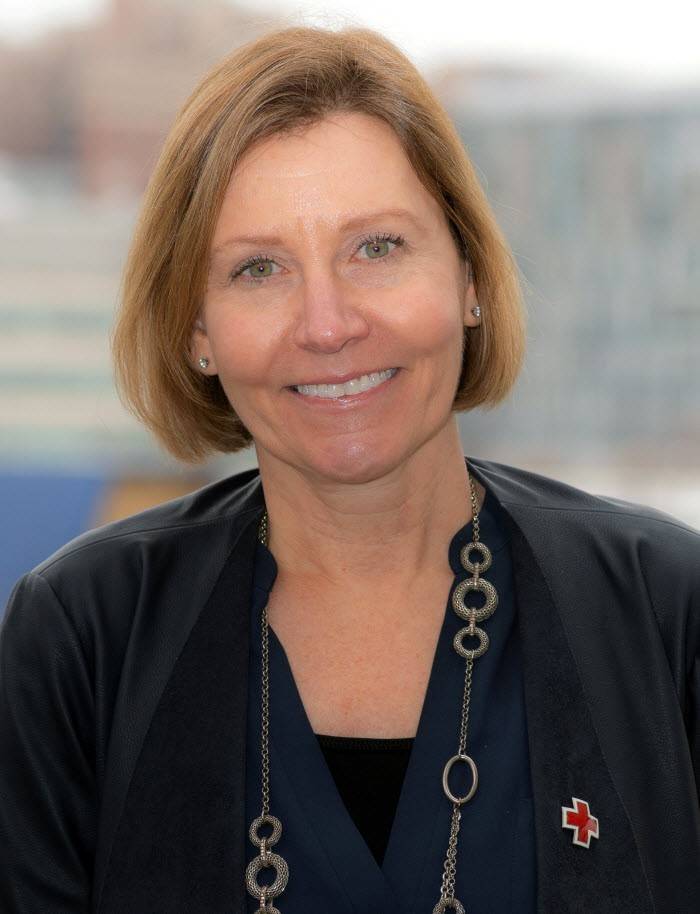 Learn More about the Auxiliary Board