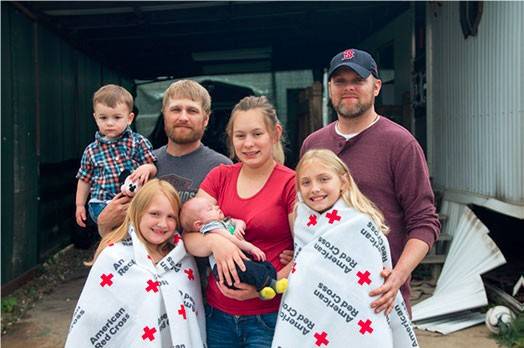 It was 2 am.  Steve Avenarius was sleeping in his bedroom as smoke started to creep into his darkened mobile home. He was startled awake by that unmistakable digital beeping of a smoke alarm.  Steve jumped out of bed and ran into the hallway, where he was immediately joined by his brother Brett. Both men saw a bright orange glow behind the clothes dryer right outside their rooms.

Brett’s wife Stephanie had been sleeping with Waylon, their two-month-old baby, in the living room when the smoke alarms went off. She immediately started yelling for the other three children in the mobile home to get outside. Still groggy from sleep, 10-year-old Adalita, 8-year-old Ivy and 1-year-old Wyatt made it safely outside.

Steve and Brett started dumping water from the sink on the flames behind the dryer, but quickly realized by their third trip back from the kitchen that the choking smoke was making it hard to breathe or see.

Three weeks before the fire, Brett Avenarius saw a flyer left by the Red Cross saying they would be installing smoke alarms this coming Saturday, April 28th 2018.  Brett knew he’d be home that day so he made a mental note to look for them and let them in.

“We didn’t have any working smoke alarms in the house. It was always something I meant to get to. You don’t think of it that much until something like this happens,” says Brett.

The Red Cross team of four volunteers installed three smoke alarms in the Avenarius mobile home. In all, they installed 153 smoke alarms in 74 homes in the Table Mound Mobile Home Park in Key West, Iowa that day.

It was only 17 days after that Sound the Alarm install event when seven members of the Avenarius family were awakened to the ear-piercing sound from those brand new smoke alarms in the middle of the night.

Steve Avenarius says “I always thought that if a fire ever went off in my house I would surely wake up, I mean it’s smoke, who wouldn’t wake up to that…but when the smoke alarms went off and I opened my eyes, and saw that the smoke was that thick in the house…scary. I mean we were that close to death. It’s heartbreaking to think that a 1 year old, a 2-month old, an 8-year-old and a 10-year-old would never be able to breathe another day, or experience anything because their lives would have been cut short if we hadn’t made that decision to accept Red Cross help and put the smoke alarms in.”

Steve promises he will never forget what the Red Cross did for them that day.