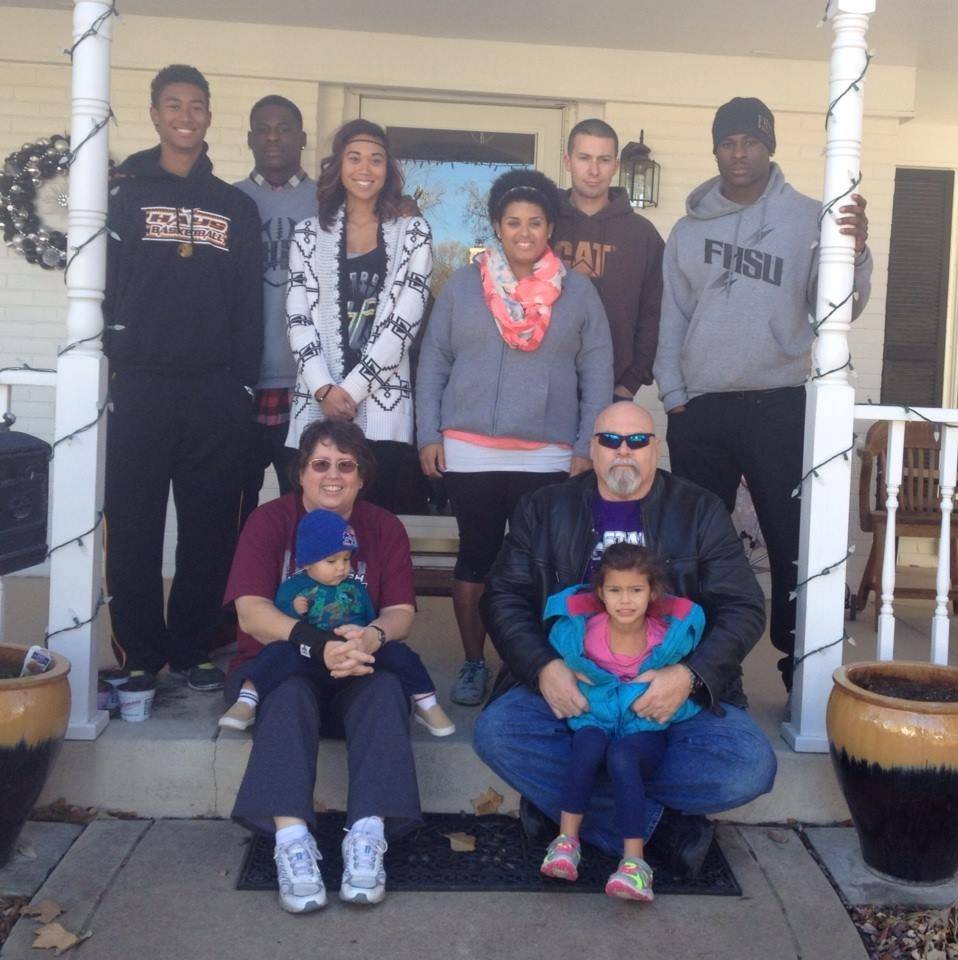 New Executive Director of the Red Cross Serving Central and Western Kansas Sherry Dryden, joined by her husband Blaine and their children and grandchildren.

“Tomorrow is the most important thing in life. Comes into
us at midnight very clean. It’s perfect when it arrives and puts itself in our hands. It hopes we’ve learned something from yesterday.”

These words by John Wayne are very important to the new Executive Director of the Red Cross Serving Central and Western Kansas, Sherry Dryden.

She connects this quote to her life in every aspect, whether it is towards her four adopted children, her herd of dachshunds, her love for fishing, hunting, gardening or her other hobbies, and her excitement for the goals for her new position in the Red Cross.

Dryden, a true definition of a Kansas girl, lives in Hays, Kansas, with her husband and their four dachshunds. She was born in Kansas and after moving around a couple times throughout her life, Hays became the community she and her husband decided to settle down in. Dryden does have a dream of moving back to her husband’s family farm, which is an hour north of Hays, and visiting those areas that are on her bucket list. Dryden met her husband, Blaine, her senior year in high school. By Valentine’s Day of that year they were engaged. They had a long engagement, though, because Blaine wanted her to live life away from him and her family. Dryden stated that she grew up a lot her first year in college and the rest of their story together is history!

One of the many fascinating characteristics about Dryden and her husband is their love and advocacy for adoption. From 1989 to 1998, the two adopted four children: Daniel, Charlotte, Ashli and Keith. Daniel was the first to be adopted out of the four children, is 35 years old and Caucasian. Charlotte is a mom of two—Emersyn, 10, and Elliot, 5—with her husband and they live on his farm south of Hays. She is the third to be adopted but is second in age at 32 years old and is Caucasian, African-American decent​.

​Ashli, who is Korean and African-American, ​​is the second child to  be adopted but third in age at 28 years old. She lives in California where she works for a beauty supply company and does runway modeling on the side. She has been dating her boyfriend for five years and Dryden excitedly stated, “his mom and I have planned the wedding, but we need the kids to get engaged!” Lastly, Keith was the fourth child to get adopted, is the youngest at 21 years old and is Korean and African-American. He is also Ashli’s half sibling. Keith is in his third year of college and has a band who just released its first album.

Dryden loves her children and prefers to say she became a mom through adoption rather than calling herself an adoptive mother. Sherry and Blaine are always sharing any time there is opportunity for all to learn about adoption. They have many reasons as to why they became an adoptive family, from traumatic miscarriages to a sister-in-law who ran a foster home in Chicago. They tried to adopt a little girl, but they were told by the State of Illinois that Sherry was too young at 21 years old. But the biggest influence was when Dryden worked in foster care for five years, co-running a family service agency for 10 years and intertwining that with what Blaine saw in the field during his years in law enforcement. These experiences led them down this path, and their beautiful family is the outcome.

After Sherry and Blaine decided four kids completed their family, they decided to start adopting dogs! The couple have five spoiled dachshunds: Mylee, 10, Dinky, 7, Cookie, 7, Weston, 7 and Pumpkin, 4. Weston and Dinky are more of Blaine’s dogs, while Mylee and Pumpkin are more Sherry’s. Cookie seems to bounce back and forth.

When Dryden is not playing with her four-legged children or visiting her two-legged children and grandchildren, she is listening to 70s disco and 80s Big Hair Bands, with lots of country in between. She also enjoys the color orange, watching movies with John Wayne, Maureen O’Hara, Kathryn Hepburn, Spencer Tracy or Carey Grant in them, or reading her favorite book: ​Lessons Learned from a Third Grade Dropout: How the Timeless Wisdom of One Man can Impact an Entire Generation by Rick Rigsby, Ph.D.. Dryden also loves the great outdoors while hunting, fishing and gardening, or staying in to craft, crochet, cook, read or remodel something. Traveling is also on this list. Blaine was in the Fraternal Order of Police and the family followed him traveling almost everywhere. They have been to 30 states and are excited about an Alaskan cruise happening in the next two years. The two are also retired motorcycle riders, but are looking to invest in trikes and to take the hobby back up again.

Dryden’s family and life has influenced her career and where she is today. She is working on a doctorate and dedicates this goal to her late grandmother who always reminded her to “get that college degree.” Dryden also says that her children are her current cheerleaders and is so proud of their support and encouragement and she is always striving to be an example for them. Lastly, she has a husband who may not always agree with what she does, such as obtaining multiple dogs, but loves her through it anyways.

When she started college, she wanted to become a teacher, but during her schooling, Dryden began working at a local hospital where business and computers were her specialty at the time. In the end, her experience with adoptions brought her into family services. These experiences directed her into the non-profit business arena. Any opportunity that presented itself to Dryden, she took a chance, believing that if it is meant to be, it will be.

Dryden has previous personal experiences with the Red Cross. Her father used to donate blood regularly and was a first aid instructor for many years. Dryden told a story of how her and a friend started a business many, many years ago where they taught first aid and CPR for 10 years and even had contracts with the Kansas Department of Transportation to train their staff. She also had many family members and friends who were nurses and advocates of the Red Cross. The most personal experience Dryden and her family has to this non-profit is how Dryden and her husband’s oldest daughter was diagnosed with Beta Thalassemia Trait-Minor. Even though she was blessed to only have a minor case of this disease, they found out the major cases all required regular blood/platelet transfusion. It was at this point where Dryden and her family realized how important blood donations are.

Nationwide natural disasters also opened Dryden’s eyes with friends who survived the Greensburg tornado and her youngest daughter being affected by fires California.

“Seeing, hearing and knowing what the Red Cross is and does brings a sense of peace to this mother’s heart knowing friends and family can get the help they need,” Dryden said. She is very excited to start working with the Red Cross and to begin bringing in new ideas from the extensive experience she has gained that will help enhance and support an already great organization. She is most looking forward to learning and working with her new team. Her first goal is to bring the Central and Western Kansas Chapter to a level of admiration in and out of the organization by everyone: staff, volunteers, donors and those who want to be staff, volunteers and donors. She wants to enhance the visibility and viability of the Red Cross in this region.

Dryden’s piece of advice: “Never stop learning. Be open to change. Embrace change. Once you stop those three, you will become stagnant and not only hurt yourself, but your company as well. Never hold yourself above anyone else. Be open to feedback from anyone and everyone.”