Blood Available When His Life Depended On It 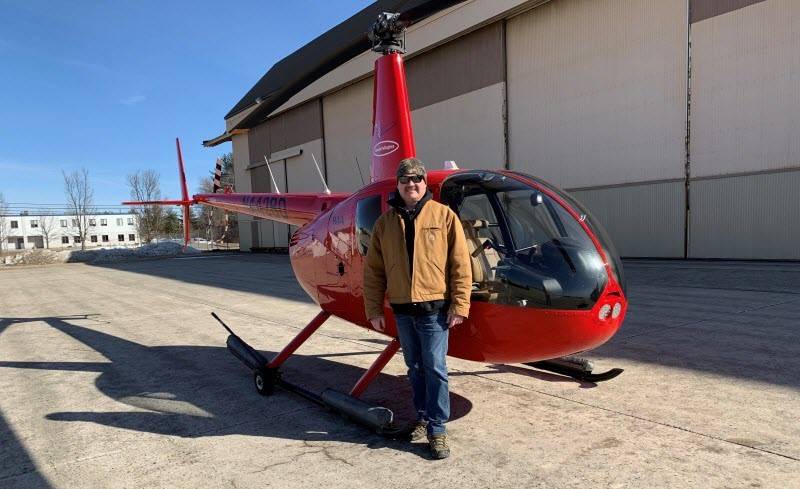 Jack White has never shied away from adventurous activities. He loves traveling on his Harley-Davidson and has piloted small private planes for the past few years. In 2019, Jack, who lives in Bowdoinham, Maine, decided it was time to master helicopter flight, and promptly signed up for lessons at the Sanford Maine Seacoast Regional Airport.

By September of that year he had accomplished roughly 50 hours of his helicopter training requirement. It was on September 28, while Jack was on his last solo flight back from Lake Winnipesaukee, that his helicopter started to spin out of control.

Jack has no memory of that day. He only heard details secondhand from those who watched as his helicopter hovered over the airport before spinning out of control and crashing to the ground.

The accident was bad but, fortunately for Jack, LifeFlight of Maine has a crew based at the airport that provides critical-care transport throughout Maine. As soon as the responders heard the crash announcement over their radio, they grabbed their equipment and headed to the nearby site.

LifeFlight helicopters routinely carry blood and they had three units onboard when they arrived at the crash site. Jack had suffered major trauma to his legs, face and head and was bleeding badly. The crew began transfusing him immediately.

Once stabilized Jack was transported to Maine Medical Center in Portland where he underwent multiple surgeries to repair his broken bones. The impact of the crash had broken both of his femur bones, his left arm, ribs, foot, ankle and jaw along with several bones in his face and skull.

In the case of his femurs and his left arm, the bones weren’t just broken, but missing pieces. Surgeons installed hardware to replace the missing bone fragments and used a system of rods and magnets to help Jack’s bones regenerate. As of this May, he is still actively in physical therapy and will be for some time to come.

“I feel a little like the Six Million Dollar Man with all the surgery I’ve had to endure,” says Jack jokingly. “I will never forget that I owe my life to the LifeFlight of Maine crew in Sanford, Maine.”

And what advice would he give people on the importance of blood donation?

“Blood is something that you don’t think about until you or someone you love needs it, but I’m so grateful to the donors who make time to give,” says Jack. “Because of them, and the work being done by the Red Cross, there were 14 units of lifesaving blood available when my life depended on it. I’m a very fortunate man.”

Help Save a Life

Going All In
David Ullman
.type=article.p=1
View All
/content/redcross/en/local/me-nh-vt/about-us/news-and-events/news/blood-available-when-his-life-depended-on-it