Blood donors helped save her life

The generosity of volunteer blood donors helped save her life, now she's "paying it forward" 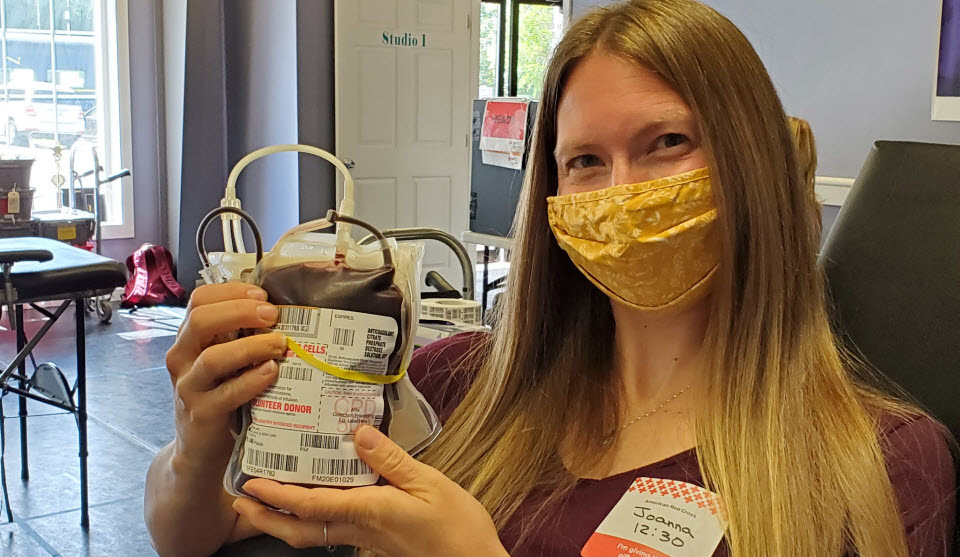 In July, 2018, New Hampshire Mother Joanna Suprock was expecting her third child; although she was active and in good health, her pregnancy was considered high risk due to the loss of her infant daughter (Mallory) several years earlier. With that in mind, her doctor made the decision to induce labor on July 20, when the baby Joanna was carrying reached its 39th week of development and considered to be full term.

On July 21, she gave birth to a robust and healthy son, Eddie, and Joanna was able to hold him just long enough for her husband to take a picture of them together before she began to hemorrhage heavily and the attending doctor gave instructions to take her immediately to the operating room.

Normally the placenta is delivered naturally after a baby’s birth but following her son’s birth only part of the placenta was delivered. As her doctor searched for the cause of Joanna’s bleeding she discovered that a portion of the placenta had become attached to Joanna’s uterus causing her to hemorrhage.

Once in the operating room her doctor determined that the only way to stop Joanna’s bleeding was to perform an emergency hysterectomy. Between her birth-related bleeding and this emergency surgery, she required 16 units of blood, four units of platelets and 10 units of plasma. Fortunately for Joanna the hospital had the blood products available that helped save her life.

Joanna was a long-time donor prior to this life-changing event but it reinforced to her the importance of blood donation. She made a pledge to herself that she would replace the roughly two gallons of blood products she had received to make sure it would be available for the next person in need.

In August, 2020, Joanna made that pledge a reality, she marked the donation of her 16th pint of lifesaving blood, replacing the two gallons of blood that helped save her life!

“Blood donation is a regular part of my routine now, and I will remain forever grateful to all the people who donated the blood that helped save my life when my son was born,” said Joanna. “Every time I donate I think about who might be helped by the blood I’m giving, and what a gift it is to be able to give.”

Thank You for Your Support
.type=article.p=1
View All
/content/redcross/en/local/me-nh-vt/about-us/news-and-events/news/blood-donors-helped-save-her-life