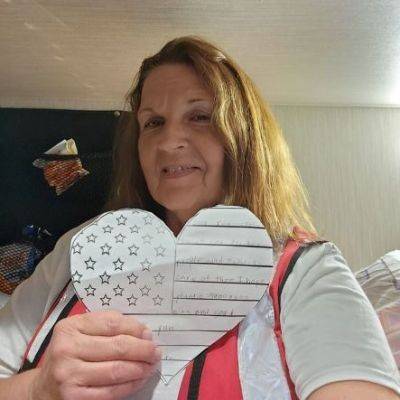 New Hampshirite Deb Budney had a void in her life. A retiree and recent widow, Deb said she found herself without purpose. She had her children, grandchildren and a great grandchild. She had her friends and her community, but she was missing a focus for her life.

Her children encouraged her to get involved with a local charity or non-profit.

“My kids said, ‘Mom, you need to volunteer. Go do something that gets you out of the house,’” she recalled.

Deb embraced their advice – and what she did next shocked her family.

"I called them, and I said, 'Hey, I landed in Texas. I'm okay. I'm heading to Louisiana. I volunteered. I joined the Red Cross, and I'm gonna go help with Hurricane Ida.’ They said, ‘Ma, we thought the food bank or something. You can't possibly do that.’ And I said, ‘watch me.’”

Within her first year with the American Red Cross, Deb deployed to natural disasters in Louisiana, Texas, Kentucky, Mississippi, New Jersey and Missouri. She found a channel for her energy, enthusiasm and empathy. Deb found her new purpose.

In September, she added southwest Florida to deployment resume. Hurricane Ian was forecasted to reach near Category 5 levels. Deb was part of the Red Cross Advance Team, made up of nearly 1,000 volunteers who traveled to Florida ahead of Ian’s landfall. Their job was to open and staff evacuation centers; to provide safe shelter for those in the storm’s path.

Hurricane Ian, with its winds, storm surge and rain, devastated southwest Florida and displaced entire towns. Homes were flooded and massive areas of Florida were without electricity.  Deb remembered helping one shelter resident determine if electricity had been restored so she and her husband could return home.

“I asked, ‘Do you have a landline phone? Is it connected to an answering machine?’ She responded ‘Yes.’ ‘Call your house,’” Deb recalled.

“She called the house and the answer machine picked up. She was so happy. She sent me these prayer cards thanking me for just doing that one simple thing.”

Only five days after returning to New Hampshire from her first deployment, Deb was back on a plane for her second deployment. This time, Deb was assigned to the Disaster Assessment Team on Pine Island and around Fort Myers. Her job was to survey neighborhoods to document damaged homes, a task that she said was emotionally and physically draining.

“We were seeing first-hand how destructive this storm was and how it affected the individual person. We had listened to their story of where they rode out the storm and, if they were in their homes, what it was like. Then we would see their homes, if anything was left. It may be just a set of steps – and that's it. Everything else that was around the steps was gone,” Deb remembered.

She continued by recalling the heartbreak of seeing personal items as they moved from house to house.

“You're walking, doing your assessment and you see a picture on the road. You pick it up and you wonder, ‘Whose house does this belongs to? Who is this?’ You just want to help these people so badly,” she said.

Although she and the team were surrounded by destruction, there were moments of relief, sprung from the gratitude of the people who had just lost everything.

“This child came running from out of nowhere with her mom behind her,” said Deb.  “All this debris around us and this little girl comes running up to me with this paper heart that she had cut out and wrote, ‘Dear Red Cross Lady, thank you for being so nice to me,’ on it. She comes and wraps her arms around me and gives me that heart. I picked her up and gave her the biggest hug.

“I had tears in my eyes because she had just made my day. She really did make my day that day.”

By Thanksgiving, Deb returned to New Hampshire to spend the holiday with her family, but her homecoming was brief. She was back in Florida by early December.

“I came back for a couple weeks to do recovery,” Deb said. “That's helping to get them back on their feet. Getting them funding or what they need immediate assistance with – clothing, food, whatever are their immediate needs.”

Deb said with her last deployment came a sense of completion.

“It's really hard to leave, especially when you leave and the job is not done,” she said. “At the beginning, when it happens and then you go home, you know there's all kinds of a mess back there. You want to get it fixed and finish it.

“So this was my third trip, which was finishing it. I got to see it from start through fruition.”

For Deb, volunteering in shelters is where she felt she could have the most significant impact.

“You have to show them compassion, kindness and care – and have listening skills. You have to listen to them and watch their body language. Offering them a hand to hold, the shoulder to cry on, whatever it is they need at that moment. Then you sit with that person for as long as it takes. That’s where your focus is. That's what I do,” said Deb.

For Deb, it’s just a matter of time until the next disaster strikes. Her travel bag is packed – and this humanitarian is always ready. Recalling her children’s concerns, originally for not having a purpose and then for her eagerness to go into disaster zones, Deb says her children have accepted her new lifestyle.

“They’ve seen the biggest change in me because I'm happy again. I'm fulfilled again. I’m doing what I love.”

Will you resolve to volunteer in 2023? Discover the many ways you can make a positive change in the lives of others at redcross.org/volunteer.