Donate Now
Home
Local
Michigan
About Us
News and Events Henry Magalski with one of his hand-crafted flag boxes. 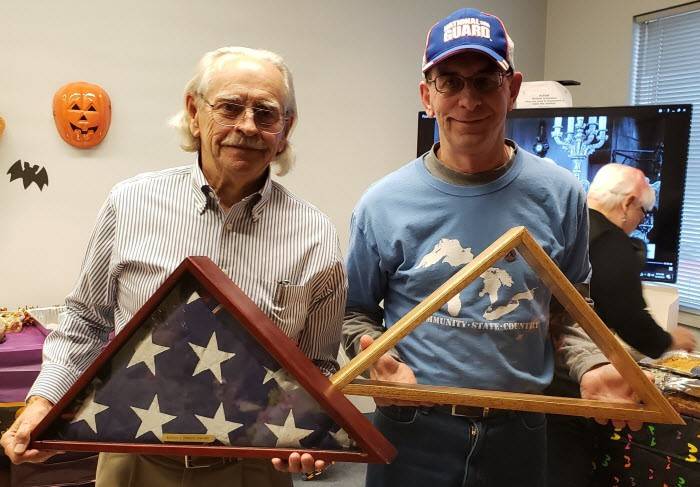 Joe Magalski is carrying on the legacy of his father, Henry Magalski. He builds and donates flag boxes (based on his dad’s design) just as his dad did for many years. Joe said, “I make (and donate) the flag boxes for two reasons.  The first is to honor my dad and carry on his legacy. The second is to honor our veterans and their families who provide us our freedom.” Joe’s father, Henry Magalski, a Korean War veteran began the tradition after he retired and Joe has committed to building 500 flag boxes to carry on the tradition.

Most recently Joe donated one of his flag boxes to Bob Perkins, a long time Red Cross Volunteer in honor of Bob’s brother, Ronald E. Perkins who gave the ultimate sacrifice for his country. The flag and flag box are on view at the American Red Cross office in Kalamazoo.

Joe’s father, Henry, hand-crafted flag display cases as a hobby and then donated them to families of fallen Service Members. The case is used to display the flag that the military drapes over the casket at the funeral. Joe took over the hobby after his father passed away.

Joe recently met Robert (Bob) Perkins while attending a local Red Cross event. While chatting Joe learned that Bob was stationed in Vietnam when his brother, Ronald (Ron) Perkins, who was also in the service, was killed in Okinawa, Japan. According to Bob, the American Red Cross assisted with coordinating it so that Bob could be the military escort for his brother in order to get both home for the funeral.

Due to the Red Cross’ instrumental involvement in both his and his brother’s return home he decided that he wanted to give back by becoming a volunteer for the American Red Cross.

Bob explained that he had donated his brother’s flag to the local American Red Cross chapter to put in their display case as an expression of his gratitude for what they did. Joe inquired about the flag box that Ron’s flag was in and Bob explained he had purchased it at a local craft store. Hearing that, Joe immediately offered to give Bob one of his handmade flag boxes. Ron’s flag now sits proudly displayed inside of one of Joe’s handmade flag boxes at the Southwest Michigan, American Red Cross chapter.

Part of the scope services provided by the American Red Cross, Service to the Armed Forces is that we offer support to all branches of the military when a Service Member passes away. One of the ways we support them is to have a Red Cross representative present at the funeral (whenever possible) to show our support.

We also express our condolences with a card and/or flowers and now we will be able to share Joe’s talent by passing along one of his beautiful display cases for the flag that was once draped over the casket of the fallen Service Member. 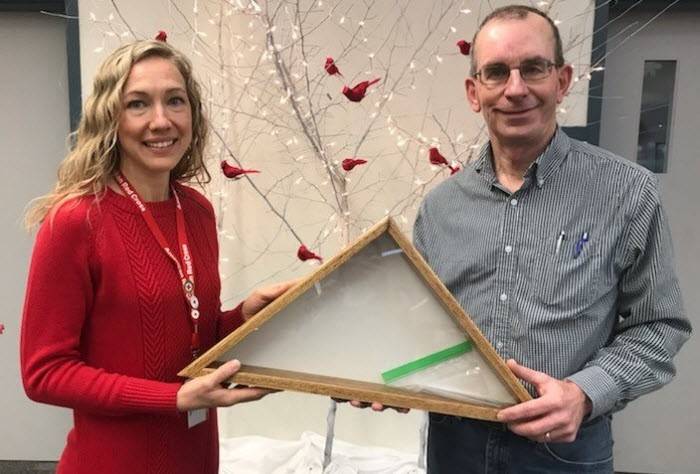 Amy Ellenwood receives a flag box that Joe recently finished. These flag boxes will be given to the family of fallen Service Members within our community as the need arises.

The flag that was draped over Ronald Perkin’s casket.