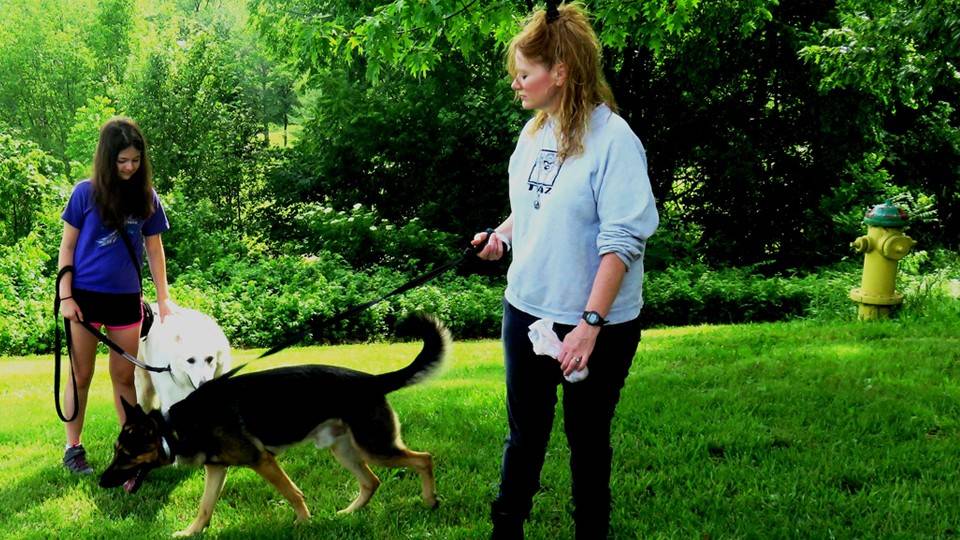 Reese the German shepherd was tail-wagging happy when Gemi Newman showed up at the portable kennel near the Red Cross shelter in suburban St. Louis to take him out for a walk so he could enjoy the fresh air and green grass.

Gemi and 13-year-old daughter Lacie Wiedemann were keeping Reese and their other two German shepherds, Kota and Mattis, at the kennel while they stay at the shelter after floodwater filled their basement, and turned their backyard into a small lake that Gemi said was complete with snakes and fish.

“I would have slept in my car before leaving the dogs,” Gemi said, as Reese wrapped his leash around her legs.

“Leave them? Never!” Lacie quickly added as she rubbed the stomach of a contented Kota, who was walking with Reese.

Although family pets aren’t permitted in shelters, the Red Cross often is able to get another organization to set up a temporary kennel nearby so pets and owners can be close to each other. The Red Cross does allow service animals to stay in shelters.

At the Red Cross shelter at the Kennedy Recreation Center where they’re staying, the St. Louis County Emergency Management Office and American Kennel Club brought in Pet Disaster Relief, a portable kennel in an air-conditioned tent with large dog crates, complete with Red Cross blankets for dogs to sleep on and also to cover the crates to provide privacy.

There’s plenty of food and water and volunteers to tend to the pets’ every need so people can feel assured that their animals are in a safe environment.

The shelter is near areas like Gemi’s neighborhood that have taken on floodwater from the Meramec River. It’s among five Red Cross shelters in St. Louis and surrounding areas experiencing near-record flooding.

Gemi said when she and her daughter arrived at the shelter two days earlier, the dogs were nervous and agitated because they had suddenly been uprooted from their familiar backyard where they could romp and play to their heart’s delight.

“They’ve had a lot of anxiety because they aren’t home and they don’t know where they are,” Gemi said. “They were scared at first but they’re starting to realize that we’re nearby and haven’t forgotten about them.”

“When we come out to take them for walks, they know we’re not going to abandon them,” Lacie said, adding she enjoys the walks as much as the dogs.

Caryl Meier and Carla DeSalme are members of the Eureka, Mo., Community Emergency Response Team (CERT) and have been volunteering as caretakers at the kennel.

When a pet arrives at the kennel, it’s given a collar with its name and an identification number that’s identical to the wristband given the pet owner.

They said the dogs can be walked several times a day which helps both them and their owners to sleep better at night.

“It’s natural that people don’t want to be separated from their pets because many times they are like a member of the family,” Carla said.