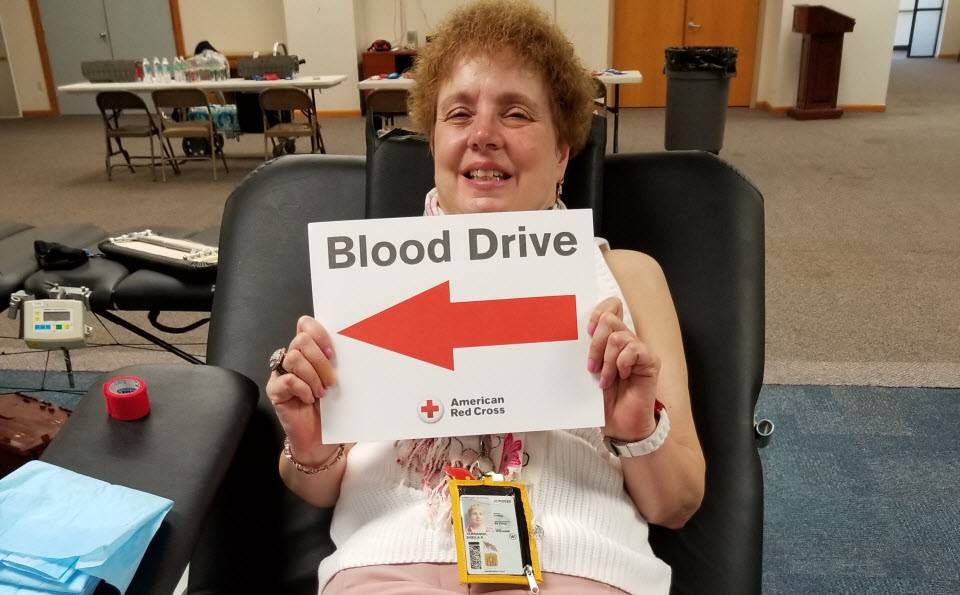 Scott Air Force Base in St. Clair County, Illinois, was an Air Service training camp established at the beginning of U.S. involvement in World War I in April 1917.

Now, as headquarters of multiple units and the center for transportation coordination across all the services, Scott employs 13,000 people—nearly half of them civilians, including one very special person—Sheila Terrando.

“I began giving blood in January 1980, when I attended Patricia Stevens Career College (Now Stevens - The Institute of Business and Arts),” she recalled. “I started giving then and never stopped because I realized donating blood helped so many people.”

Sheila currently works as an Information Technology Equipment Control Clerk for the Communications Squadron at Scott AFB, providing information technology management control services throughout the base.  Highlights of her work history at Scott AFB include serving as  secretary for the Avionics Branch from June 1985 to March 1988; secretary for Training Management from March 1988 to July 1989; library technician at The Air Force Communications Agency from July 1989 to January 1996; archives technician  at The Air Force Communications Agency from January 1996 to December 1998; mail clerk in the Command Section of The Air Force Network Integration Center (AFNIC) from January 1999 to May 2012; security clerk at the Visitors Control Center from May 2012 to April 2015.

When Sheila was at the Air Force Communications Agency, she served as the Blood Drive Coordinator from 1996 until 2012, when her position was eliminated.  During her service as the Blood Drive Coordinator, she won numerous awards, including Volunteer for the Quarter in 1999 and Volunteer of The Year in 2000, 2005, 2010, and 2012. In March 2012, she marked her 100th pint donation.  While employed at AFNIC, she served in the Booster Club organizing multiple trips for children and adults and was a candidate for the “Heart of Scott” award.  As the Activities Person for The Booster Club, she planned events such as trips to the Fox Theater and to St. Louis Rams, Fightin Illini, Missouri Tigers, St. Louis Blues and St. Louis Cardinals Baseball games.  She also orchestrated children’s events, such trips to the Ringling Brothers and Barnum and Bailey Circus, Sesame Street Live and Disney On Ice, and she served on the picnic and holiday party committees.  In her current position with the Communications Squadron, Sheila is involved in the Booster Club, Picnic Committee, Thanksgiving Potluck Committee, and Holiday Party Committee.

Sheila maintains her health, and thus, her ability to consistently donate blood by healthy eating and staying active.  In 2011, 2015, 2016 and 2017, she participated in the Walktober Events and tied for first place with numerous participants in one of the events!  In 2018, Sheila participated in the Fall To Fitness Event, a six-week walking program in which she, again, tied for first place.  Recently, Sheila was involved in the Step Challenge, where she walked at least 10,000 steps every day during the month of May.  She is very grateful for and motivated by the encouragement and activities to stay fit, which are provided by her employer and by Morale, Welfare and Recreation—a network of support and leisure services (see AAFES) designed for use by U.S. service members.

Outside Scott, she also works to increase breast cancer awareness.  For 15 years, she has been involved in the Susan G. Komen Race for the Cure®. The long-time Edwardsville, Ill., resident has developed close friendships through that activity and others.

One of her best friends is Carolyn Cramer, who, in May 2005, went through a Cesarean-section (C-section) delivery with her son, Brad Hopke.  Carolyn’s doctors asked her to find two people who could donate blood in case she and Brad needed it during the C-section.  “The good news was that Carolyn did not need the blood, but she was so very grateful, writing me that no other gift she received was so meaningful as my donation of blood.  My blood was saved for her and her son, but they didn’t need it.  But, I know it was not wasted.  I know it benefited someone else.”

Donating blood every eight weeks is part of Sheila’s regular schedule.  What’s behind this devotion?  “I donate so that another person can see another birthday, another vacation, another holiday,” Sheila said.  “Giving blood makes me feel worthwhile and that I am contributing and making a difference in another person’s life.”  Some of her favorite songs that inspire to donate blood are:  “Tomorrow” from “Annie”, “Too Many Tomorrows” from “Sweet Charity”, “I Have Dreamed A Dream” from “Les Miserables”, “Many A New Day” from “South Pacific”,

“These songs mean a lot to me because there might not be a tomorrow unless you donate blood,” said Sheila. “I would like see dreams come true for people who need blood.  There will be another day for someone who needs blood.  My secret to donating blood is eating steak, chicken, vegetables, salads, fish and cereals.”  She said she stays away from tea because it decreases your iron by 50 percent.  Also, she doesn’t exercise for four days before donating blood and drinks plenty of water and gets plenty of rest.

Her contributions are particularly critical now when supplies of blood are dangerously low and every two seconds someone in the United States needs blood.  About 38 percent of the total population can actually donate blood, but only 10 percent give blood.

To schedule an appointment to donate now, use the free Red Cross Blood Donor App, or call 1-800-RED CROSS. The Red Cross has added thousands of appointment slots at donation centers and community blood drives across the country over the next months to accommodate more donors. Donation appointments and completion of a RapidPass online health history questionnaire are encouraged to help reduce the time it takes to donate.