Mollie Tinnin Broke Down Her Own Barriers, Now She Helps Others Do the Same 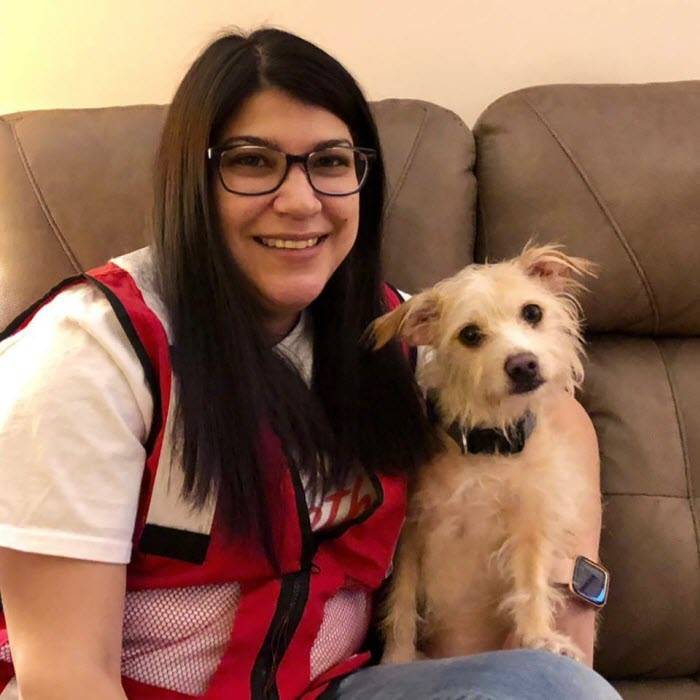 The day before surgery for an ostomy after a brutal assault a few years ago, Mollie Tinnin hired a photographer to take family portraits. We’re not going to be a family after this, she thought, because I’m going to be just less of a person.

Struggling physically and emotionally in the months that followed, she eventually found a new career with American Red Cross biomedical services. She says the acceptance she feels in her new position has given her the support she needed to break through walls that were keeping her from becoming her best self. “I don’t think I would be who I am today if it weren’t for people at the Red Cross who just stepped up and accepted me for who I am.”

Along the way something remarkable happened. Having discovered her own inner strength, she has become a fierce advocate for others facing disabilities and serves as a vital part of the American Red Cross Disability Integration team.

The Disability Integration team identifies challenges facing those with limitations and comes up with solutions. According to John Mathews, MOAR Regional DI lead, “Our ultimate responsibility is to break down barriers. But the first step is identifying them, and Mollie brings a brand-new set of eyes to the task.”

Mollie is working with her region to make her vision of hosting fully accessible blood drives a reality. She cites the example of a former police officer Ryan O’Connor, who was shot while transporting a burglary suspect and requires assistance within getting in and out of the donor bed as a result of his injuries. Red Cross policies prohibit phlebotomists from lifting donors with mobility limitations or from a wheelchair to the table, so Mollie and her husband, Jeff, both emergency medical technicians stepped in to assist. She hopes stories like these will inspire ambulance and fire districts to step up and volunteer to sponsor these drives and assist with donors who may need assistance getting onto the donor bed.

Some barriers are less obvious. When an employee reached out expressing concern about meeting the needs of donors with hearing impairments who are unable to read lips because of mask wearing during the pandemic, she proposed a simple solution. Clear face masks are now available on the Approved Materials List for Biomed regions to obtain for use at blood drives. It was an easy fix, but someone had to first identify the problem.

During the 2020 hurricane season, Mollie stepped outside her own comfort zone and served as Red Cross Disaster Health Services and the COVID-19 Safety Officer. “I literally cried happy tears when I got the approval to deploy despite my physical limitations. The whole experience gave me a lot of confidence, and I learned a lot about how resilient I am.”

Red Crossers who have overcome obstacles often have deep reserves of empathy and become effective caregivers. Encountering a woman considering suicide, Mollie related her own struggles and how she has emerged with a clearer vision of what she wants in life and the difference she can make. Heartened by Mollie’s encouragement and assisted by a Red Cross Disaster Mental Health staffer, the woman found hope and resolved to move forward and rebuild her life.

In an unexpected twist, Mollie returned home from that deployment with a new best friend. When an elderly shelter resident realized he could no longer care for his beloved dog, Mollie stepped up and adopted the pet, renaming him Charles in a nod to the dog’s former home in Lake Charles, Louisiana. Charles now spends his days in Mollie’s St. Louis-area home, surrounded by Mardi Gras-themed toys.

“I feel like I’ve come full circle,” she says. “It’s hard to describe, but donating blood myself and empowering others—I’ve never felt such peace with my PTSD. I feel for the first time that out of something so awful, the good that has resulted outweighs the overall horrible experience.”

“The Red Cross has really given me a voice as a person with a disability, and it’s empowered me as a person facing challenges to have dreams and chase them.”