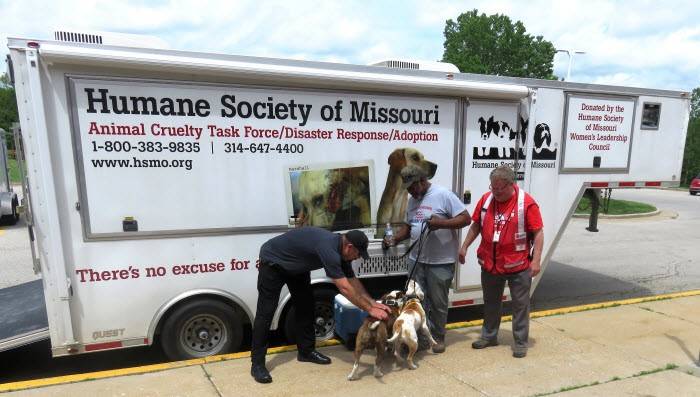 JEFFERSON CITY, Mo., May 27, 2019 – Chad Gard of the Human Society of Missouri pets Chewy and Taz as owner Jerome Ruff and Red Cross shelter manager John Schulte watches. The Humane Society brought one of its mobile kennels to the Red Cross shelter in Jefferson City, Mo., so those staying there could have their pets nearby in a safe environment. (Red Cross photo by Carl Manning) 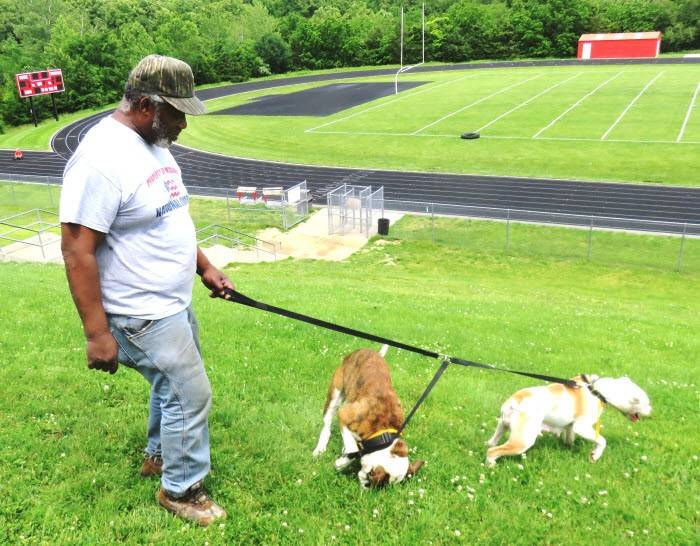 JEFFERSON CITY, Mo., May 27, 2019 – Jerome Ruff exercises his dogs Chewy and Taz outside the Red Cross shelter in Jefferson City, Mo., where he’s staying after a tornado struck the city. The Humane Society of Missouri has a portable animal shelter near the Red Cross facility so people can stay at the shelter and have their pets nearby. (Red Cross photo by Carl Manning)

When it comes to dogs and their owners, it’s hard to imagine them being separated and certainly that’s the case when Jerome Ruff showed up with Chewy and Taz at the Red Cross shelter needing a place to stay.

He was among scores of people without a home after a tornado tore through Jefferson City, Mo., the night of May 22. All he had left were his dogs and the clothes on his back as he started walking and looking for a place to stay.

“I could have been cold and heartless and dumped them and moved on, and it would have been a lot easier for me for sure,” Jerome said. “But I’m just not built like that. They’re my babies.”

Somebody suggested that Jerome go to the Red Cross shelter, but since pets aren’t allowed to stay there, he wasn’t sure. But he decided to check it out anyway.

“I wouldn’t stay without my dogs. Whatever befell them would befall me as well,” he said.

When he arrived, he discovered that the Humane Society of Missouri, a Red Cross partner based in St. Louis, had brought in one of its mobile kennels and set it up outside the shelter.

The kennel on wheels has 36 living areas with air conditioning that can take care of dogs, cats and practically any other type of pet with a clean place to stay, food and medical attention if needed.

Chad Gard, Humane Society staffer, said having the kennel nearby often makes the difference between someone staying in a shelter or striking out on their own, maybe sleeping in their car with their pets.

“It helps in the recovery of the people They a relieved to know that their pets are nearby and will be well cared for,” he said.

Having Chewy and Taz nearby makes all the difference for Jerome as he figures out what to do next. At the shelter, there are Red Cross volunteers to help him and knowing his pets are safe makes it easier for him to focus on his recovery needs.

“It really brings tears to my eyes when I think of the help I’m getting here at the shelter, especially providing a place for my dogs,” he said.

On a recent day, Jerome got his dogs from the kennel and took them for a walk around the area. At one point, he had to untangle their leashes and they happily rolled in the grass and sniffed the air.

As Jerome watched his dogs play, he said, “They’re safe, so I can sleep.”

Keep Your Pet Safe During a Disaster