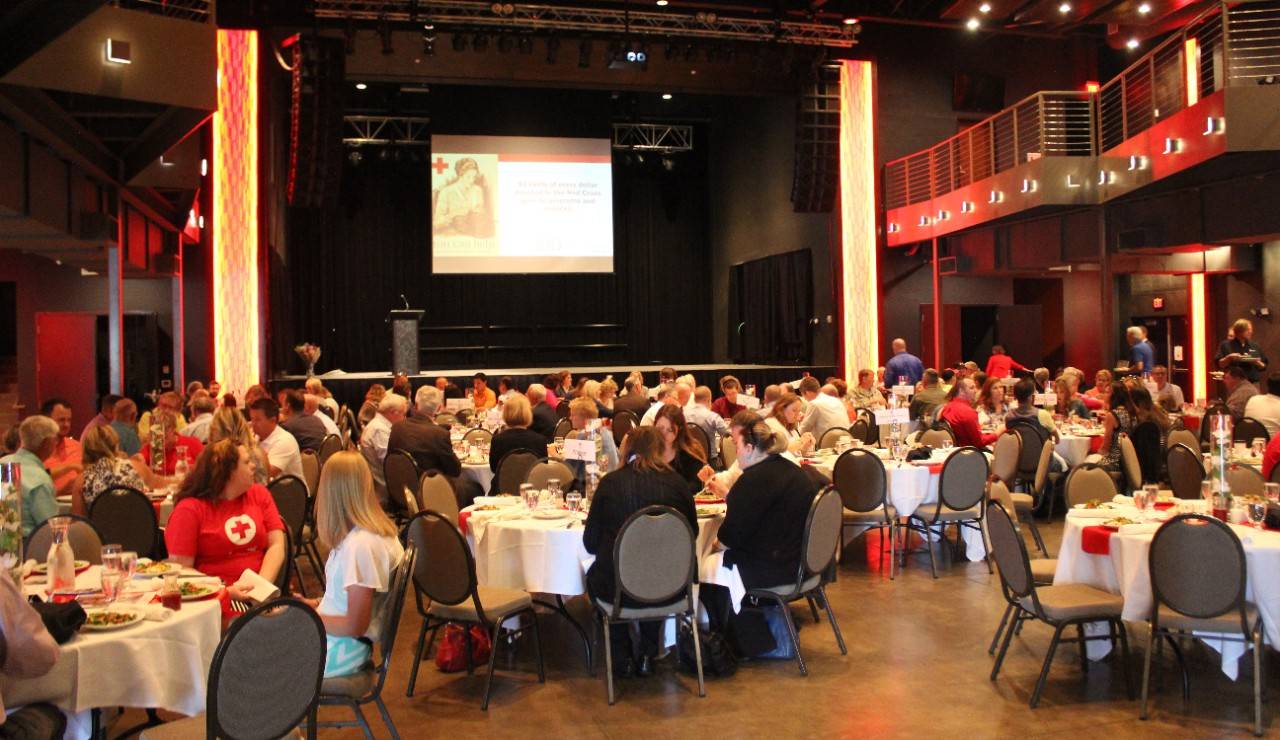 “We look forward to another year of dedicated service in communities across South Dakota.”

The Eastern South Dakota chapter of the American Red Cross held its Annual Meeting on June 20, 2017. Nearly 200 people filled The District in Sioux Falls as the Red Cross celebrated 100 years of service in South Dakota by thanking and honoring those who make the Red Cross mission possible.

Keynote speaker, Dr. Gerard Jacobs, Emeritus Director of the Disaster Mental Health Institute at the University of South Dakota shared with those in attendance about the important role that mental health support plays in the overall disaster recovery efforts. He has worked with the American Red Cross and other organizations nationally and internationally ranging from minor events to major events such as the September 11, 2001 attack on the World Trade Center, an earthquake in India, and the 2004 Indian Ocean tsunami. Dr. Jacobs says mental health support is vital in the midst of a disaster. He observed the evolution of mental health care being stigmatized, to now being recognized as a crucial part of the recovery process. Dr. Jacobs says both Red Cross volunteers and the people they assist who are affected by disaster need mental health support, and no one should be ashamed to ask for it.

An important part of this annual event is recognizing those who have contributed to their community in extraordinary ways that align with the Red Cross mission. Two deserving individuals and one community partner were recognized for their work with the Red Cross. The 40 Winks Foundation by Slumberland Furniture was recognized as an outstanding community partner for providing new mattresses to families who have lost theirs in a fire. The other two recipients are dedicated Red Cross volunteers.

Volunteer Heather Jacobsen of Sioux Falls was recognized as the Rookie of the Year. This award is presented to the individual who has demonstrated a high level of commitment and investment in the humanitarian efforts in any line of service within the American Red Cross. This award recognizes the individual that has given extraordinary time and attention to fulfill the mission and delivery of the Red Cross through selfless service. Heather works in Volunteer Services and serves at the regional level, overseeing a team who assisted with bringing new volunteers into the organization. She is also a disaster responder, going to help families who have lost everything in a house fire or storm. She also worked behind the scenes to meticulously refresh all of the emergency shelter kits to make sure every community in Eastern South Dakota is prepared should a disaster strike. As a new volunteer, she jumped in with both feet and has already made a great impact.

Volunteer Sherri Skjonsberg of Sisseton was awarded the Spirit of Volunteerism award. Also known as “Living the Mission,” this award is presented to an individual who has repeatedly demonstrated the qualities of and exemplified the American Red Cross mission statement. The recipient goes above and beyond expectations to move the vision of the organization forward in various areas of service and humanitarian efforts. Should the mission of the Red Cross be stood up on legs of its own, this individual would be that living mission statement. Sherri truly embodies the mission of the Red Cross. She has served as a volunteer for the Red Cross in the Sisseton area, at times being the only local volunteer. She is the Red Cross to her community. At this year’s annual meeting, Sherri told an emotional story of losing her home and possessions in a house fire and receiving Red Cross assistance. Click here to read her full story.

The Red Cross Annual Meeting had inspiring messages, well-deserved honors, and was also a time for official business to be conducted. Outgoing Board of Directors Chair Nikki Wajer (South Dakota Air National Guard) passed the gavel to Joel Christensen (Rainbow International of Sioux Falls) as part of the official business at the meeting. Joel welcomed in a new slate of Directors to the Eastern South Dakota chapter of the American Red Cross:

Our Red Cross staff thanks those who attended the 2017 Annual Meeting and continue to support the Red Cross mission. We look forward to another year of dedicated service in communities across South Dakota.

Giving Tuesday: Give Something that Means Something for People in Need
.type=article.p=1
View All
/content/redcross/en/local/mn-nd-sd/about-us/news-and-events/news/Heroes-Honored-at-Red-Cross-Annual-Meeting