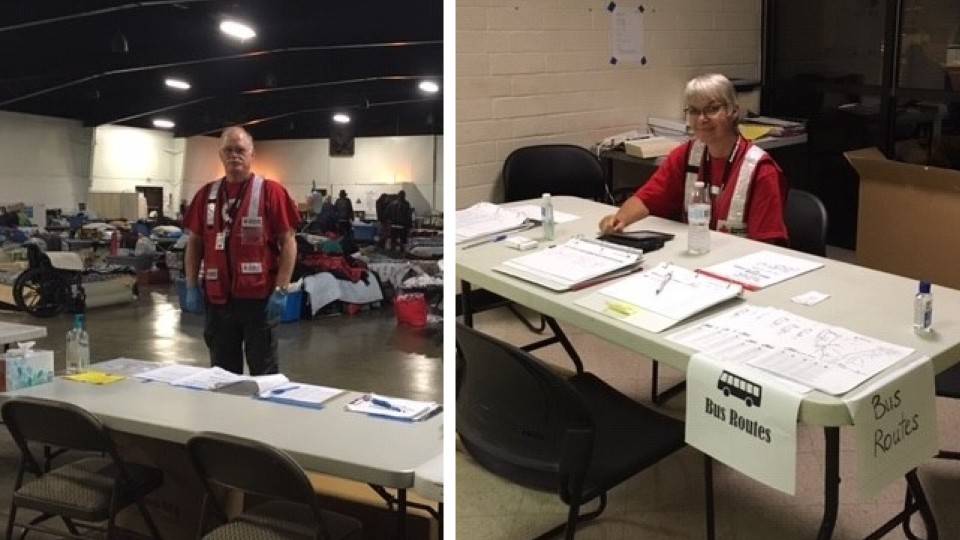 "She and I working together, we enjoyed that very much. It's nice having someone with you who you can share the experience with."

Dan Wall has worn many hats during his five deployments as an American Red Cross volunteer.

“Some people have hobbies; I have this,” Dan says.

He has traveled to Texas and North Carolina in the aftermath of hurricanes and to California for wildfires.

“It’s an adventure. You have to keep your eyes open so you know what’s happening,” Dan says. “Your adrenaline is always running on high.”

His first deployment was to Houston in 2017 in the immediate aftermath of Hurricane Harvey when only emergency responders had been in the area. Dan spent his time feeding people by driving an Emergency Response Vehicle (ERV) into the devastated neighborhoods.

After returning from Texas, Dan spent about three weeks at home in South Dakota before deploying to California. This time he didn’t go alone; Dan’s wife Connie was at his side.

“My wife and I went out to be ERV drivers. We were sent to Santa Rosa, California,” Dan said.

Upon arrival, they helped distribute emergency supplies such as cleanup kits, shovels, rakes, and sifters.

“Everything was burned,” Dan added.

He and Connie eventually helped in the donation management area. People bring donations to the shelters and when the shelters close, the items are brought to a central warehouse for sorting, Dan explained.

Shoes and clothes for men, women, and children, books, toys, food items. “Just about everything you can imagine” was among the donations.

“We had to go through all the food products to determine their expiration date. We found a half-used bottle of ketchup,” Dan said. “We came across good clothes, used clothes and not-so-good clothes.”

He and Connie worked together at the warehouse, slept in the same staff shelter and rode together in the ERVs.

“She and I working together, we enjoyed that very much,” Dan said. “It’s nice having someone with you who you can share the experience with.”

After California, he and Connie deployed together again after Hurricane Florence devastated North Carolina in 2018.

Initially, the couple helped set up shelters in Charlotte. Then they were asked to help with disaster assessment.

The Disaster Assessment Team went into the neighborhoods and assessed the damage. That information was used by caseworkers who worked with the people seeking assistance.

Whether sorting clothes, working in shelters or assessing damage, Dan says working alongside Connie is a joy. He encourages other couples to consider deploying together.

“It’s something you can share. If you both go out, you know how you feel when you come home. You can talk about it,” Dan said.

The American Red Cross is always in need of passionate humanitarians to help with disaster relief efforts. Click here to learn about Red Cross volunteer opportunities in your community, across the country, and around the world.