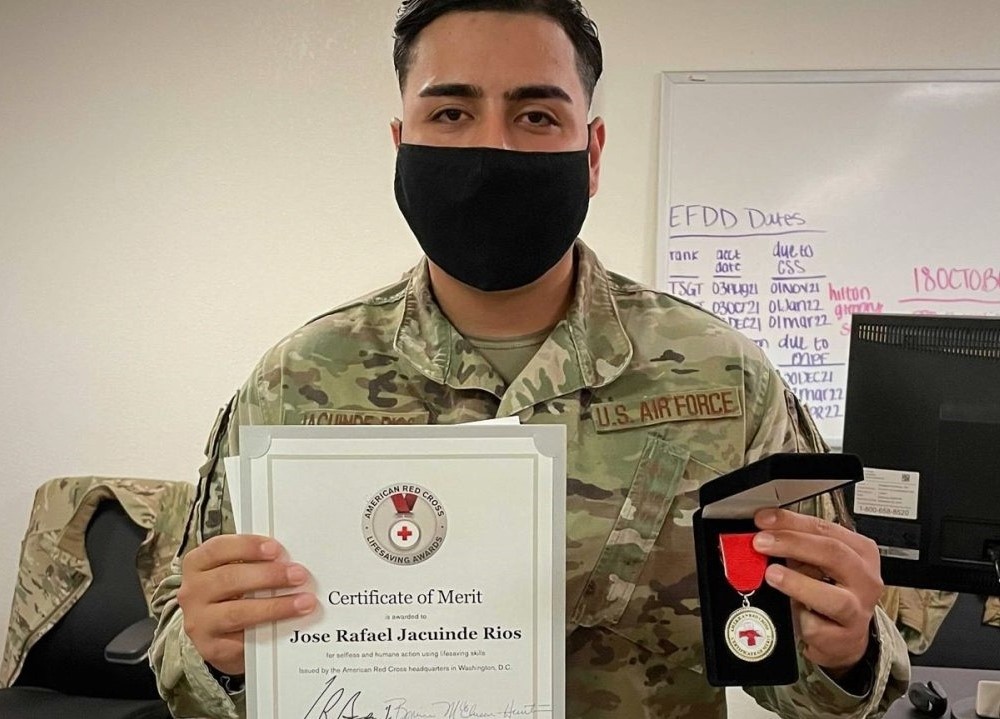 On April 17, 2021, while running Saturday morning errands with his wife and two young children, Senior Airman Jose Rafael Jacuinde Rios called the skills he learned in American Red Cross CPR and First Aid training to save the life of a man he found lying on the side of the road with a severe head wound.

For these heroic and lifesaving actions, Senior Rafael Jacuinde Rios received the American Red Cross Certificate of Merit at a ceremony at Minot Air Force Base on Friday, October 22, 2021.

“The Certificate of Merit is the highest award given by the Red Cross to individuals who save or sustain a life using skills learned in a Red Cross Training Services course,” said Rob Stotz, Executive Director for the American Red Cross serving Western North Dakota. “We’re extremely proud and honored to present this award to SrA Jacuinde Rios, whose actions exemplify our mission to help people prevent, prepare for and respond to emergencies.”

According to SrA Carmen C.D. San Diego who witnessed the event, “Senior Airman Jacuinde-Rios noticed an incapacitated man lying on the side of the road. While many vehicles passed this man, he pulled over to see if the individual needed assistance, but quickly saw that the man was lying in a pool of blood.”

SrA San Diego added, “Without hesitation, Jacuinde Rios took control of the scene, calling for medical assistance, and instantly providing Self Aid Buddy Care (SABC)/Basic lifesaving procedures; rolling the individual on his side to prevent the possibility of choking, cleaning wounds around facial area and assessing for further injuries. SrA Jacuinde Rios continued holding the individual upright to ensure his safety until the medical team arrived on scene.

”Truly impressed by his actions," she continued. “He has shown a true act of courage and selflessness during this situation. During off-duty hours, he has proven that he will go above and beyond his line of duty and out of his way to assist a member of the community in their time of need. SrA Jacuinde Rios is the epitome of what a true American Airman is.”

Senior Airman Jacuinde Rios joined the Air Force in 1997 after high school. He currently serves as a security Forces Air Defense Technician assigned to the 91 Missile Security Operations Squadron at Minot Air Force Base in North Dakota. Prior to this position, he also served at Joint Base Elmendorf Richardson in Alaska. He lives in Minot with his family.

Give Thanks, Give Life with the Red Cross this Holiday
.type=article.p=1
View All
/content/redcross/en/local/mn-nd-sd/about-us/news-and-events/news/senior-airman-honored-for-using-red-cross-training-to-save-a-lif