Decades of Volunteerism Pinned to a Red Cross Vest 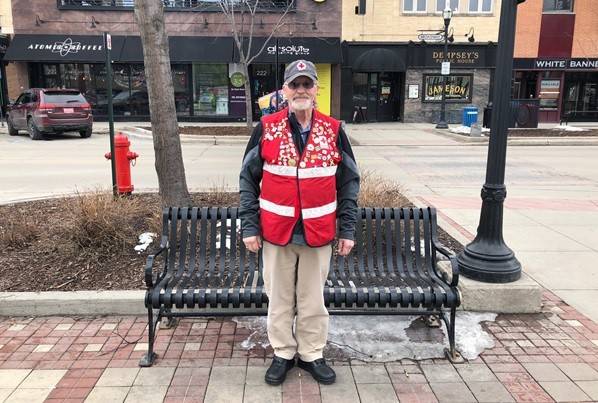 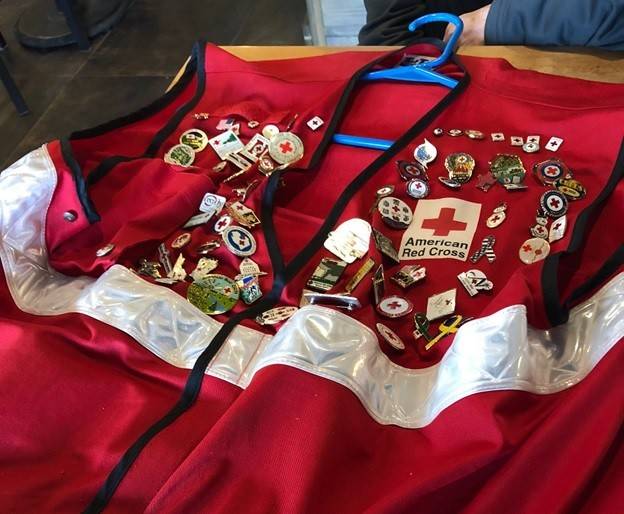 Pins on Jerry Walker’s volunteer vest serve as a symbolic representation of the committed efforts he has made to serve the Red Cross mission.

"I really just like helping. I think it’s my calling.”

“The reason I wanted to share my story was because I’m hoping somebody who reads this will be inspired to volunteer,” said Jerry Walker, a difference maker in the Red Cross family for the past 39 years.

Jerry first found himself affiliated with American Red Cross when he was living in Missouri, and a friend of his asked him to join. “I said ‘sure, why not?’” Over the course of the next (almost) forty years, the experiences Jerry's had as a volunteer have turned into a lifelong passion of his. His excitement to give back to others runs deep in his DNA, and he believes it’s his calling to serve others. I was on the receiving end of Jerry’s giving nature when we met to discuss his illustrious tenure serving with American Red Cross chapters. He wouldn’t even let me pay for the coffees.

As soon as we began talking, I was enamored by Mr. Walker’s story. While he was living down in Southern Missouri back in 1979, his friend had got him on board with the Red Cross team. Shortly thereafter, his friend quit, leaving Jerry on his own with the responsibility of overseeing Red Cross involvement in 5 counties. Up until 1985, when his wife unexpectedly passed away and he moved to Fargo to be closer to his sister, Jerry ran the volunteer operations in his neck of the woods. When he came to North Dakota amidst a very difficult time in his life, he was still wishing to give back to the Red Cross.

“What inspired you to get involved?” I asked Jerry.

Jerry paused, momentarily, before telling me about his youth. With a turbulent home life as a boy in Missouri, he was kicked out of his house at a young age. He told me about the people who helped him get through life when he was hitchhiking to get by, and how he always had the desire to give back to those who helped him. This was his way of doing so.

Throughout the duration of his involvement with Red Cross, he’s helped with relief efforts for tornadoes, floods, wildfires, and house fires. More recently, as his knowledge and experience has expanded, he has been an asset to the Red Cross on the logistic side of things, assisting with teaching, planning, and damage assessment. When asked about what his fondest memories were from his time volunteering, Jerry grinned and said “hold on one second.” He then ran out to his car before returning to our table with a bright red vest, decorated with a seemingly endless supply of trading pins.

Jerry’s vest is replete with a collection of memories in the form of pins that he’s purchased or traded for. These pins represent a variety of relief efforts from all over North America, and serve as a symbolic representation of the committed efforts Jerry has made to raise up the Red Cross. Though he’s not always wearing this vest when he volunteers, it has turned into one of his favorite items due to what it represents.

With almost 40 years of memories, it’s understandable that it may be tough to pick a favorite. He’s won awards including the Service to Mankind Award, and the HERO Award, and has made a difference in communities all across the United States. However, Jerry said the most meaningful memory happened just a few years ago when some Minneosta State University-Moorhead (MSUM) students who volunteered with the Red Cross recognized Jerry with a plaque for his service. “Those girls,” Jerry said with a tear in his eye, “made such a difference in my life.”

Fully understanding how important it is to get people involved with the Red Cross at a young age, I asked Jerry what kind of advice he would give to someone who may be apprehensive about volunteering. He put it simply: “it’s rewarding.” Jerry went on to discuss how good it makes you feel when you can help someone. “I’m not in it for the praise or the awards, I really just like helping. I think it’s my calling.”

Individuals who are going through a crisis and require the assistance of the Red Cross team need the help of volunteers like Jerry to help them get through. We’re grateful to shine the spotlight on this tremendous human being, and want to thank him for all of the work he’s accomplished!

What’s next for Jerry?

“Well, I’ve never been to the headquarters in D.C.,” he said with a smile.

Give Thanks, Give Life with the Red Cross this Holiday
.type=article.p=1
View All
/content/redcross/en/local/mn-nd-sd/about-us/news-and-events/news/volunteer-spotlight-on-jerry-walker