Red Cross Helps At Home and Across the Country in 2018

2018 was another year of record-breaking disasters across the U.S., with deadly wildfires, destructive hurricanes, and other tragic events affecting millions of people from coast to coast. Time and again, families turned to the American Red Cross during their darkest hours, and thanks to many extremely dedicated volunteers and generous donors, we were there to provide shelter, food, comfort and hope.

"When major disasters upended lives across the country this year, Red Cross volunteers from our community answered the call to help -- nearly 200 times in total," said Gary Striar, Regional CEO for the American Red Cross. "All the while, local volunteers continued to provide relief and comfort when home fires and other emergencies impacted neighbors here at home." 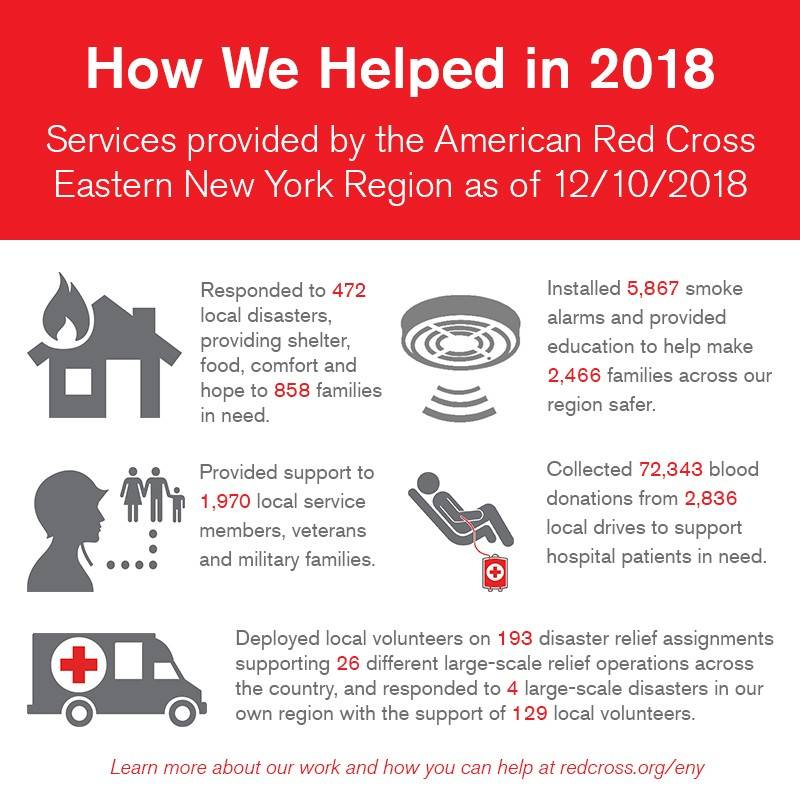 Beyond disaster relief and preparedness, Red Cross Service to the Armed Forces (SAF) volunteers provided support to 1,970 local service members, veterans and military families this year. And across Eastern New York, we held nearly 3,000 blood drives and collected 72,343 blood donations to support patients in need. (All data as of December 10, 2018.)

"Generous support from our local volunteers and donors ensures that we are there to help whenever and wherever we are called. As 2018 draws to a close, we want to express our sincere thanks to those who've helped deliver Red Cross services to so many people this year."

It's not too late to support the Red Cross in 2018. To make a tax-deductible donation before December 31, visit redcross.org or call 1-800-RED-CROSS. To give the gift of life, make an appointment to donate blood or platelets at redcrossblood.org. And to learn more about volunteer opportunities in your community, visit redcross.org/volunteer. Your gifts of time, money and blood will bring comfort and hope to countless families in need.