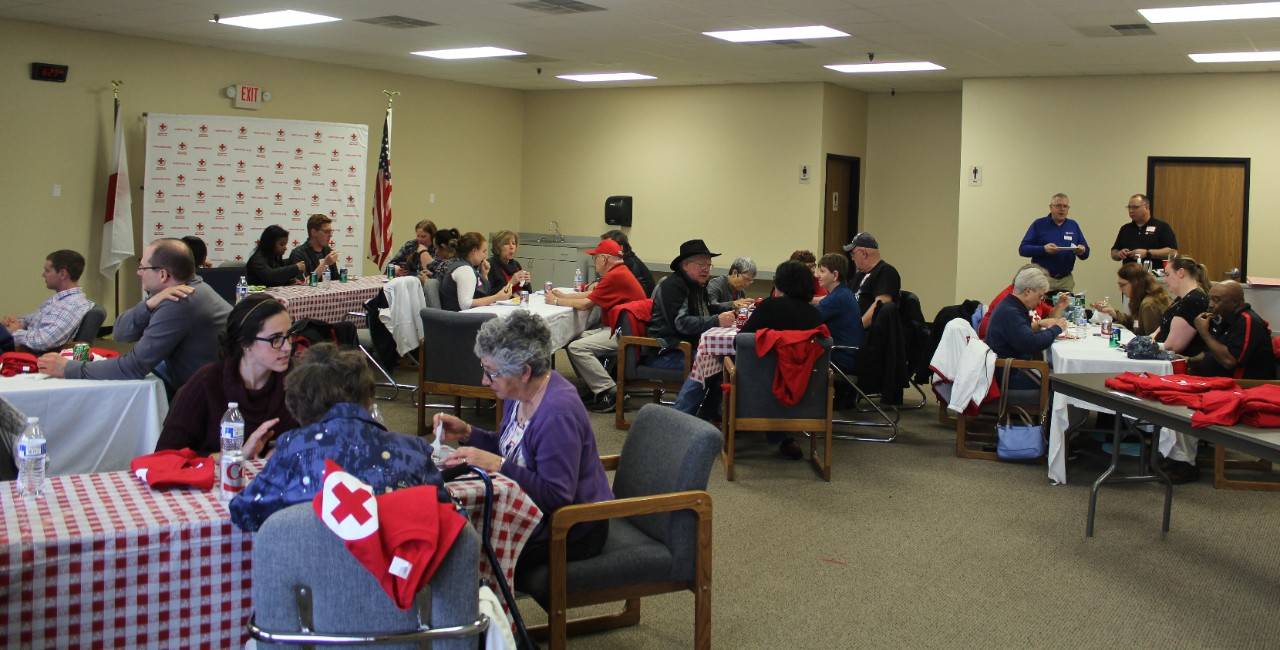 "Red Cross volunteers are humanitarians. We do it for the people. We care. This is what we do."

Food, laughter and stories of volunteerism filled the Dakotas Region Red Cross headquarters on Monday, April 24. Red Cross staff hosted nearly 40 volunteers to kick off National Volunteer Week. It was a casual night full of good vibes. “Thankful” and “inspirational” are words used to describe the evening. It started with Red Cross staff members preparing and serving a meal for the volunteers. A positive buzz filled the room as the team met new-comers and caught up with those they hadn’t seen in a while.

Each volunteer and staff member introduced themselves, sharing how long they have been involved with the Red Cross, what roles they have served, and why they continue to live out the Red Cross mission. This was a very inspirational time of the evening. Volunteers who have been serving for decades told stories of how powerful it feels to give back. Being able to provide a comforting hug to someone who has just lost their home in a fire was a touching memory of one volunteer. Most on the team were in agreeance that they volunteer with the Red Cross because they feel connections with other volunteers and have formed strong bonds with Red Cross team members, calling them “a second family.”

A common theme throughout the room was people – we do this for the people. We are humanitarians. We care. This is what we do. Red Cross volunteers donate time and talent because they know it’s important and they’ve experienced first-hand how they are making a positive impact in others’ lives.

We were proud to have members of the University of North Dakota Red Cross Club at volunteer appreciation night, along with a handful of new volunteers from area high schools. Seeing multiple generations come together for a common cause is encouraging and fills our organization with hope.

A slideshow of pictures was shown, encompassing the hard work accomplished in the last year. A single picture captures a moment during disaster responses, community events, service to the Armed Forces, and preparedness activities like smoke alarm installations and Pillowcase Project presentations. There is no doubt volunteers in the Dakotas Region are visible and involved in the communities they serve.

A program and awards ceremony followed. Each year, the Red Cross recognizes three volunteers for outstanding service. Tanner Lee was named 2016 Rookie of the Year. Leonard Scott (a.k.a. Scotty) was named the 2016 Disaster Cycle Services Volunteer of the Year in Memory of Mason Hollifield. Diane Atkins was given the 2016 Living the Mission award and will also be honored at the Red Cross annual meeting.

The Red Cross truly could not fulfill its mission without the power of a dedicated volunteer force. If you are interested in becoming a Red Cross volunteer, go to redcross.org or contact your local Red Cross office for information.

Giving Tuesday: Give Something that Means Something for People in Need
.type=article.p=1
View All
/content/redcross/en/local/mn-nd-sd/about-us/news-and-events/news/Volunteers-Recognized-for-Hard-Work-and-Dedication