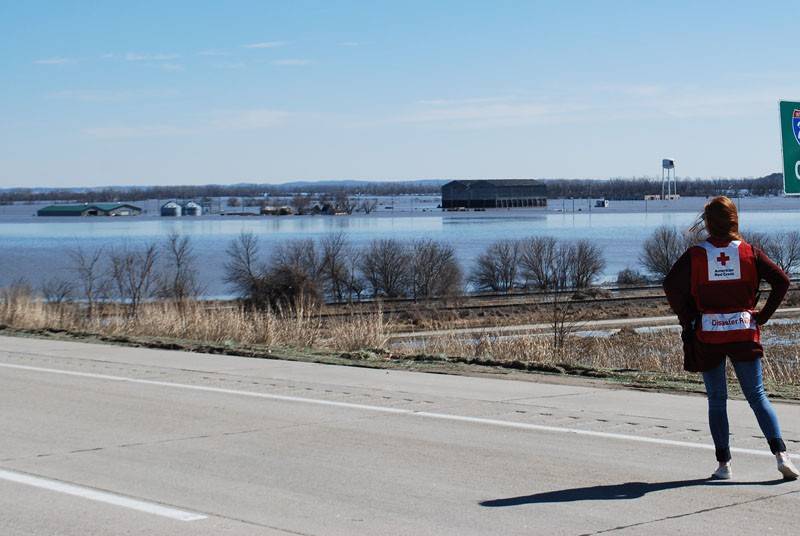 When a bomb cyclone caused major flood damage in Nebraska and Southwest Iowa this spring, the American Red Cross provided care and comfort for those who were affected.

In communities from Wood River, Nebraska, to Avoca, Iowa, a stretch of more than 200 miles, 30 Red Cross shelters sprang up. Red Cross volunteers from 41 states, Washington, D.C., and Puerto Rico, descended on the area to help meet the urgent needs of residents.

‘What do you need, how can I help?’
Delivering hope to victims

The flood relief operation in Nebraska was not Charles Scripter’s first rodeo.

Retired from the paid workforce, Scripter has volunteered with the Red Cross since 2003 in multiple ways: He delivers blood and blood products to hospitals throughout the area; he responds to local home fires as a member of the North Platte Disaster Action Team (DAT); and he makes himself available for three-week deployments to disaster recovery operations around the country.

“I think I’ve had 15 or so deployments over the years, but I’ve never been out of the country,’ Scripter said. “I’ve been sent in every direction, though – north, south, east and west.”

With the Nebraska floods, Scripter, who goes by Chuck, was deployed first to Bristow, a small village set between larger towns Spencer and Lynch. “I had trouble getting to Bristow because the roads were washed out, so I had to drive clear around it to the west, and then circle back east,” he said

Scripter stayed in Bristow a week, providing food and water for residents and manning the shelter before the Red Cross sent him to Fremont.

“I had a Red Cross ERV (Emergency Response Vehicle) with me, and they needed it there.”

In Fremont, Scripter became a homeless ERV driver. “That’s what we call it when you use a Red Cross vehicle to get to a disaster site and then turn it over for use in the relief operation,” he said. “Then you start jumping rides in other vehicles with other drivers. I volunteered at a shelter set up in the Presbyterian Church. It’s a big building and we shared the space with several other organizations, including the Southern Baptists.”

By the time he arrived in Fremont, the flood waters had begun to recede.

“We went out during the days, doing ‘search and feed,’ looking for people and making sure they had food and water. I did that for a week, and then was transferred over to Spiritual Care, as they didn’t have anyone on site at the time who was trained in that function. Spiritual Care is completely different than basic disaster relief. You go from a go go go routine, to a very low-key approach to helping.”

Scripter says working in Spiritual Care reminded him again that one of the toughest issues victims grapple with in the aftermath of a disaster is a profound sense of loss.

So how do Red Cross volunteers help people adjust to loss?

“At first, victims are despondent, grieving,” Scripter said. “You slowly, gently, try to coax them into remembering even the smallest thing they are thankful for, maybe something that was not lost, or something that went right. With time, their demeanor begins to change. They start to open up.”

In his 16 years with Red Cross, Scripter has come to believe that people who are well-grounded spiritually often facilitate their own healing by reaching out to help others. Those with less spiritual footing may “sit on the sidelines, at a loss for what to do next. They may not have developed the spiritual part of their lives yet,” he says. “If we can extend a little comfort and understanding, that’s an important part of their recovery process.”

Retired from Northwestern Bell Telephone Company, Scripter said his former employer was passionate about getting its managers out into the community. He has retained that sense of volunteerism and in addition to Red Cross service, also devotes time to Habitat for Humanity and the Retired Seniors Volunteer Program (RSVP). Between the three organizations, he stays busy and focused.

But that doesn’t mean he wasn’t ready to return home when his three-week deployment ended.

“Red Cross disaster relief is not a perfect system,” he says, “but it’s pretty good. Little things go wrong. But we always try to keep our minds focused on the mission – asking victims, ‘What do you need, how can I help?’ And then we do our best to provide that help.”

His advice to anyone considering becoming a disaster relief volunteer: “To get over your own sorrow, to get beyond any hardships in your own life, go help others with theirs. That’s why you should volunteer, and that’s why you do volunteer. It is a way to help yourself, plus the person you’re helping.”

Of the many memories Dale McAndrews of Omaha harbors from his weeks as a Red Cross caseworker assigned to the flood operation, the one that moves him the most is seeing volunteers from throughout the country in Nebraska.

“Seeing so many people arrive to help victims in my own home state… to see it personally… their professionalism and care were just very moving. I learned every day from my teammates how to do casework well, so that we could really help others,” said McAndrews.

More than 500 Red Cross volunteers served on the Nebraska-Southwest Iowa relief effort, including case workers who interviewed victims and helped them sign up for additional services, either through Red Cross or other agencies.

“We tried to assess their individual situations and move them to the next step in their recovery, whatever that was,” McAndrews said.

In his two years as a Red Cross volunteer, and after having been deployed to disasters in Kansas and California, he has learned to ask questions that help victims talk about what they have gone through and what they need. How close was it? Did you have much time to get out? Were you able to take anything with you? What do you need?

“Someone told me once that with a disaster victim, it’s like the trauma sits at the back of their brain,” he said. “When they start to talk, those thoughts move to the front of the brain, making it easier for them to relate what has happened. Talking does this. I’ve never forgotten that, and I see it happen. You talk to them for a while, and you see them begin to lighten up.”

McAndrews says the most effective caseworkers have attributes of empathy and patience, as well as a general willingness to serve. And they are resourceful.

“In my first deployment, I learned that sometimes help comes from the Red Cross, and sometimes from other agencies,” he said. “It’s important to be knowledgeable about what other agencies in the community are offering.”

His advice for those considering volunteer casework with the Red Cross: “Be prepared for your life to change because of the experience,” he said. “I often find myself thinking about a woman – a victim of flooding – who was not able to return to her house to help salvage what was left. She didn’t want people to throw everything away. She wanted to be able to sort through it herself. It was sad, but she had such an incredibly strong will. Her positive spirit would always come through.”

“It’s the people – the way they pull themselves together – that I find so energizing,” he said. “At least it hits me that way.”

Cindy Brinker had volunteered with the Red Cross twice before – the first time after Hurricane Katrina hit the Gulf Coast in 2005, and several years later, when flooding impacted Nebraska City.

But when flooding wreaked havoc in the immediate area, she didn’t hesitate to renew her credentials and apply for an assignment at an Omaha shelter that served as a temporary home to families and their pets, all displaced from water-ravaged homes.

“By day, family members would leave the shelter and go to their jobs and schools, or back to their home to check on their property,” Brinker said. “They all had responsibilities and schedules they needed to maintain as best they could. And then they would return to the shelter at night.”

When she reported to the local Red Cross, she was reminded that relief operations are initially chaotic, as volunteers from throughout the country converge on a state in need. Arrangements must be made for travel, accommodations for volunteers, as well as victims, and expenses. Volunteers’ credentials and background checks must be current.

“When I realized I could go online and update my information, it expedited the whole process. They next day I was contacted by a Red Cross person in New York, who let me know my background check was complete. I had additional questions the following day, and the person who walked me through it was from California,” she says. “Eventually I was able to schedule my work shifts online, on my phone.”

Her shelter assignment included serving meals and keeping the common areas clean. She ran errands for sheltered families and helped with the animals.

“By the time I started working with them, some families were frustrated,” she said. “But all of them seemed very appreciative of the Red Cross volunteers in the shelter.

“The Humane Society was of great help,” Brinker said. “I suppose at the height of the operation we had six or seven pets living in the lower level of the facility. Family members were responsible for feeding and walking them.”

Brinker, a retired social worker, describes her experience as positive.

“I really enjoyed shelter work, and I say that as a volunteer whose duties included picking up dog poop, breaking down boxes and sanitizing tables,” she said. “I like working with families. I also liked working alongside Red Cross volunteers from Ohio, Colorado and Michigan. They were all wonderful and professional. I was moved by their willingness to help our state, but they said they were moved by the compassion Omaha people displayed for their fellow citizens.

“We had all ages in the shelter, including a baby. People donated prom dresses, make-up and hair for three teenage girls, so they could go to their prom. A group of quilters made each family a quilt,” Brinker said.

She recalls the last day of the shelter operation.

“Some families went back to their homes, some went to live in temporary FEMA housing, some moved out-of-state, and others went elsewhere. One family was waiting to see if their property would be condemned. Red Cross volunteers worked with every family to make sure they either went to stay with relatives, moved into a temporary accommodations, or had secured a rental home. All had received some emergency financial assistance from Red Cross.”

Brinker’s advice to those considering volunteering with disaster relief: “Don’t wait for a disaster, to walk into a Red Cross office. Volunteering requires previous training and having your paperwork in order. Red Cross offices can be hectic places during disasters and asking for an assignment on the spot can be frustrating. You must be patient. But if you like helping families in need, providing disaster relief can be an immensely satisfying volunteer experience.”