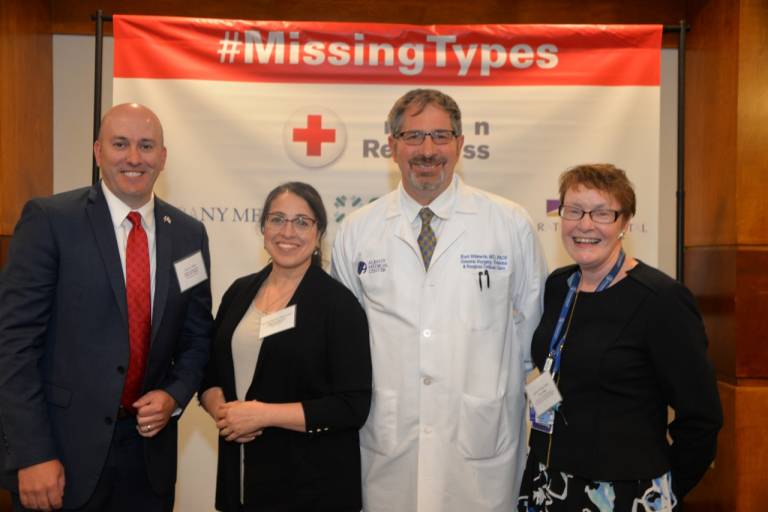 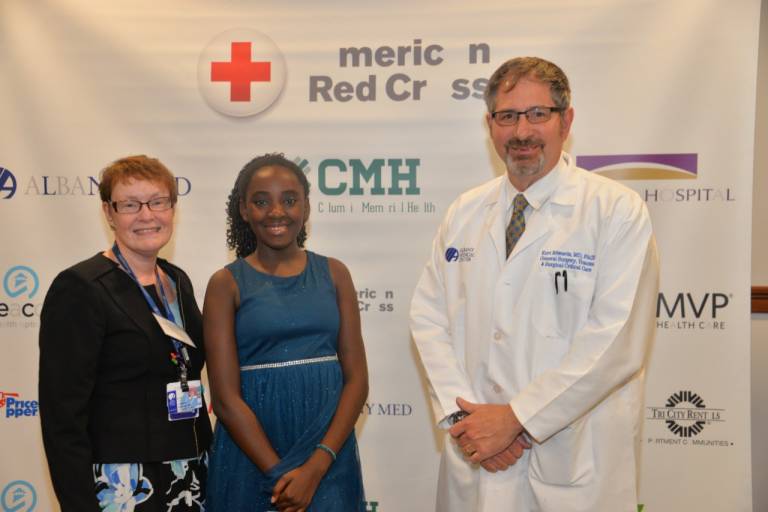 13-year-old Anne Singiza, pictured with Dr. Joanne Porter and Dr. Kurt Edwards, hopes her story will inspire more people to give blood. Anne was born with sickle cell disease and receives regular blood transfusions as part of her treatment. 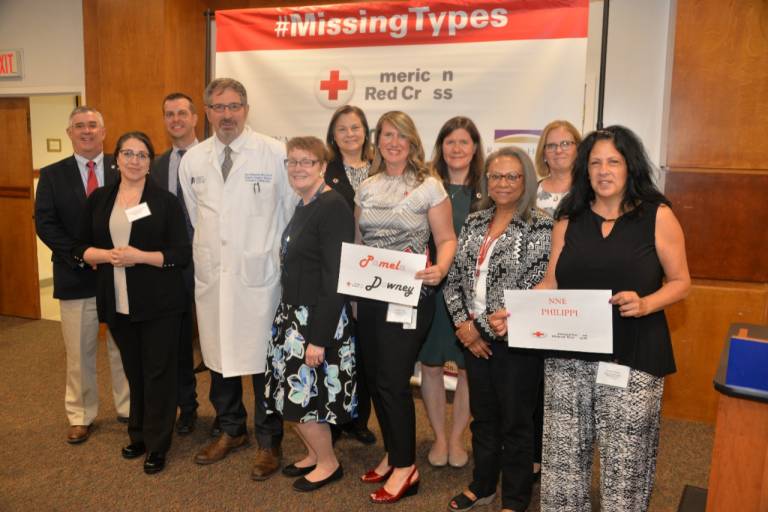 Doctors and staff from the Red Cross and Albany Med join forces to encourage donors to join the Missing Types movement and make an appointment to give blood. 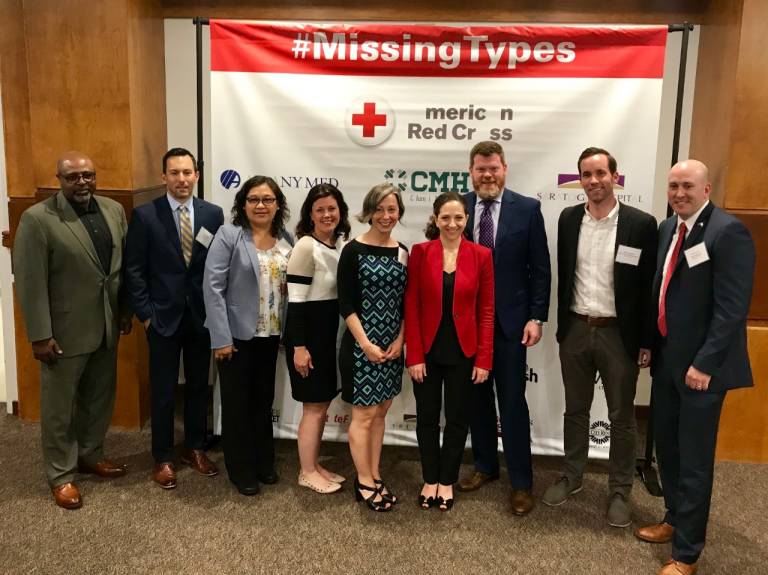 Corporate and community partners are joining the Missing Types movement by removing the letters A, B, and O - letters representing the main blood groups - from their names and logos, and hosting blood drives this summer. Pictured above from left to right are representatives from State Farm, Columbia Memorial Hospital, Stewart's Shops, Fingerpaint, Tri City Rentals, and Hoffman Car Wash.

Today, the American Red Cross launched the Missing Types campaign to raise awareness of the need for lifesaving blood donations and urge the public to make an appointment to give blood or platelets this summer.

During the Missing Types campaign (June 11-30), the letters A, B and O – letters representing the main blood groups – are disappearing from brands, social media pages, signs and websites to illustrate the critical role blood donors play in helping patients. When the letters A, B and O vanish from everyday life, the gaps are striking. And when A, B, O and AB blood types go missing from hospital shelves, patient care and medical treatments are affected.

To kick off the campaign in the Capital Region, a press conference was held on Tuesday morning at Albany Med. Red Cross leaders were joined by experts from Albany Med to discuss how the Missing Types campaign can make an impact in the lives of local patients. Altered logos from campaign partners in the Capital Region were on display, demonstrating support from Albany Med, Columbia Memorial Hospital, Saratoga Hospital, Beacon Health Options, Fingerpaint, Hoffman Car Wash, MVP Health Care, Price Chopper/Market 32, State Farm, Stewart’s Shops, and Tri City Rentals.

Dennis McKenna, M.D., executive vice president, senior associate dean for clinical affairs, and president of the faculty group practice at Albany Med, opened the press conference by welcoming guests and speaking about his own experience as a blood donor. “Albany Med knows having a stable and sufficient blood supply is critical to our mission and to our community, yet only three out of every 100 people donate blood,” he said. “Hopefully, through the Missing Types campaign, we can help inspire more people to make an appointment and donate within the next few weeks.”

Kevin Coffey, chief development officer for the American Red Cross Eastern New York Region, served as Master of Ceremonies. He stressed the importance of having blood readily available when it is needed, and acknowledged the many partners who have stepped up to support the Missing Types campaign, not only by removing the As, Bs and Os from their logos but also by hosting community blood drives in the coming weeks.

Kurt Edwards, M.D., Chief of Trauma and Critical Care at Albany Med, spoke next, sharing a few favorite aphorisms, including: “Money doesn’t grow on trees, but blood almost does.” He explained how red blood cells regenerate in the body every 120 days, allowing donors to give blood that will help save others at no cost to themselves. Dr. Edwards also shared the story of a current patient who suffered extensive injuries in an accident and received 140 units of blood during his time in the trauma center. Today that patient is on the road to recovery, but without those units of blood on the shelf during an emergency, he could have faced a very different outcome.

Money doesn't grow on trees, but blood almost does.

Joanne Porter, M.D., Associate Chief of the Melodies Center for Childhood Cancer and Blood Disorders at the Bernard & Millie Duker Children’s Hospital at Albany Med, spoke about the more than 300 children her team treats annually who rely on transfusions of blood and/or platelets as they undergo chemotherapy. Dr. Porter then introduced the day’s special guest, 13-year-old Anne Singiza, a Melodies Center patient and blood recipient. “She is a shining example and an inspiration to donors as a part of this Missing Types campaign,” said Dr. Porter. Anne was born with sickle cell disease, a blood disorder which causes the breakdown of her red blood cells and involves numerous complications and health risks. Anne receives regular transfusions of red blood cells, which are helping her grow healthy and strong.

Fay Bernadette West, M.D., medical director for Red Cross Blood Services, shared results from a recent survey revealing some of the public misconceptions about the need for blood. “Over 26% of people surveyed said that they have not donated blood because they never really thought about it,” she said. “Part of our purpose today is to bring the need for blood to the forefront of your thoughts.”

In closing, Kevin Coffey again stressed the importance of donating blood, but also shared other ways for people to help. “Volunteers play a critical role in delivering Red Cross blood from all of our local blood drives to hospitals across our region,” he explained. “We also rely on financial support to help us maintain a safe and stable blood supply and a reliable fleet of blood transportation vehicles.”

Donors can help fill the Missing Types this summer by making an appointment to give blood. Visit redcrossblood.org/missingtypes, use the Red Cross Blood Donor App, or call 1-800-RED CROSS (1-800-733-2767). To learn more about volunteering, visit redcross.org/volunteer. And to make a donation to help the Red Cross maintain and improve their local blood transportation vehicles, please visit https://www.crowdrise.com/o/en/campaign/eastern-new-york-blood-fleet.