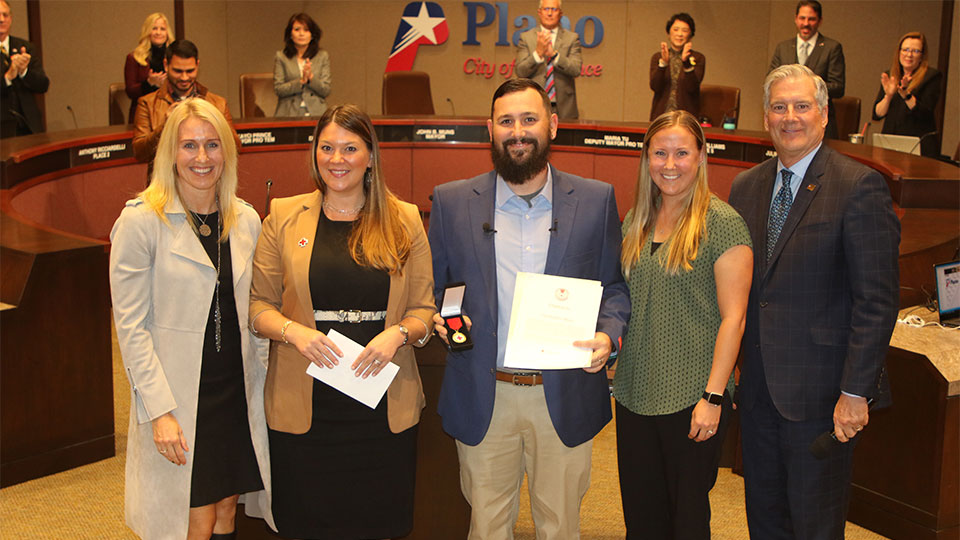 Emergencies can happen at any time and anywhere. Regardless of when and where they occur, emergency situations usually have one thing in common: a crowd of people standing around, staring at a victim—wondering who should act and trying to remember what to do.

Chris Alban knew what to do. While vacationing with wife in Mexico this past April, the City of Plano Parks and Recreation supervisor noticed a woman floating face down and unresponsive in a pool. Alban reacted quickly, relying on the training he received from the American Red Cross.

He turned the woman over in the water and saw that her lips had turned blue. Immediately, he got the woman out of the pool. Once out of the water, the woman slowly became responsive, but still had a weak pulse. He placed her in the recovery position while others went for help. Alban stayed with the woman in distress until medical personnel arrived, saving her life.

“It feels good,” Alban said after receiving the honor. “It’s nice to be recognized. In the end, it’s nice to see that the lady is able to spend time with her family. It’s nice to get to that point.”

Alban has spent the last two decades of his life in and around water—first as a lifeguard and now as an aquatics facilities manager in Plano. Because of that, he has extensive training and certification in water safety. All his knowledge played a crucial role on that fateful April day in Mexico.

Since the Lifesaving Awards revival in 2018, the Red Cross is proud to announce we have awarded it to 2,001 individuals worldwide who have helped save 1,011 lives. Alban’s actions exemplify the highest degree of concern from one human being for another, who is in distress.

“In my 16 years of experience with the American Red Cross, I’ve learned that heroes—the brave men, women and children willing to step forward and help a stranger during their greatest time of need—are all around us,” said Megan Dulgar, Interim CEO of the American Red Cross North Texas Region. “But I’ve also learned that these individuals are not common. Because Chris was able to act quickly and decisively during a crisis, he showed rare and extraordinary courage and heroic action.”

Alban was prepared to act when confronted with an emergency. Not everybody is. He stresses the importance of proper training and alertness for everyone when they are spending time in and around the water. It could mean the difference between life or death.

“It could happen to anybody,” Alban said. “We just need to do our part to make sure that proper water safety measures are being taken no matter where you are—backyard pool, lakes, rivers, streams and obviously on vacations. That’s ultimately what the importance of this is, to have people really understand water and the severity of what the dangers can be.”