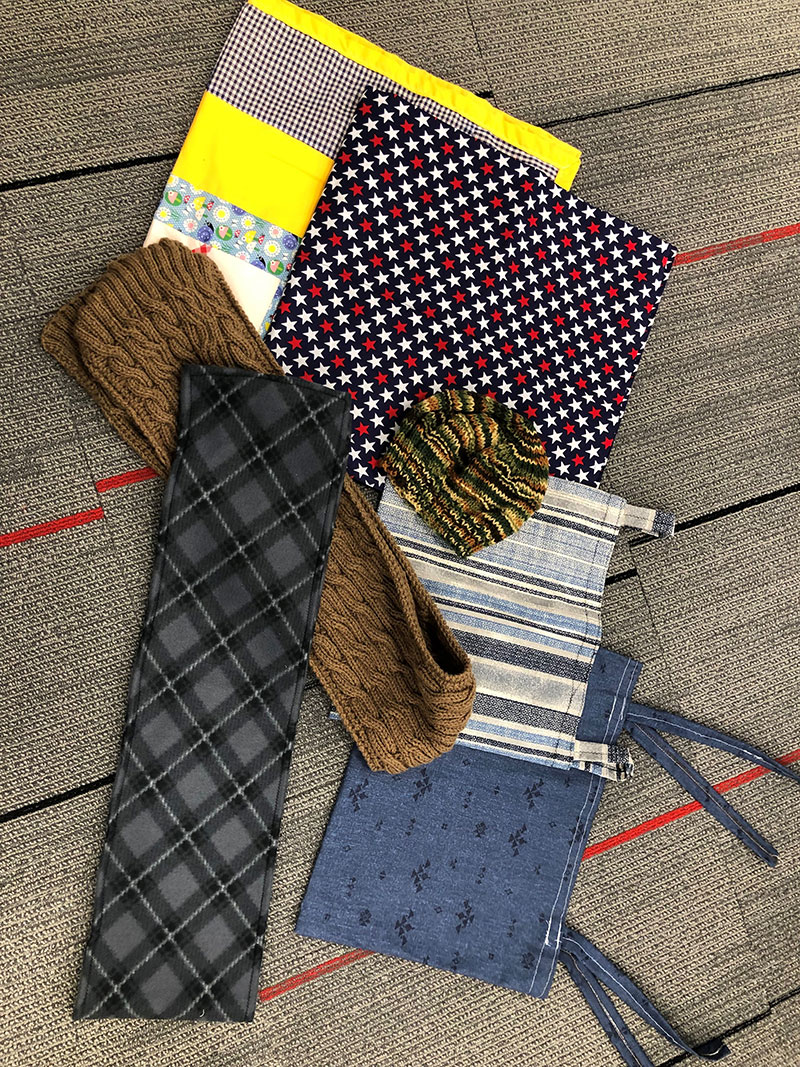 The American Red Cross is dedicated to serving our veterans. Through various programs, we support veterans with the help they deserve, including providing them with handmade items. It is some of the most important and heartfelt work our volunteers do.

The North Texas production room, led by Marcia Bauer, is under the guidance of Service to the Armed Forces. It is a group of volunteers—and some who just want to help without recognition—who are sewing and knitting personal affects for patients at Veterans Affairs clinics and facilities.

“For the VA and the veterans, we make chemo caps, wheelchair caddies, bathrobes,” says Bauer. “I have been making catheter covers for the VA hospital in Bonham and I have been making adult bibs for a VA nursing home. We also provided, this year, at least 100 scarves. I think 50 of them went to the VA in Amarillo and 50 went to HUD VASH.”

HUD VASH is a collaborative effort between Housing and Urban Development and the VA to help provide housing for homeless veterans. HUD VASH specifically requested the scarves from the production team. Bauer and her team also made 600 facemasks for the VA during the early months of the COVID-19 pandemic.

Since December 2021, the production room has stitched and knitted over 370 items for the VA and HUD VASH. The majority of those were donated to the Dallas VA Medical Center, but they also made things for the Thomas E. Creek Department of Veterans Affairs Medical Center in Amarillo, Sam Rayburn Memorial Veterans Center in Bonham and the Clyde W. Cosper Texas State Veterans Home, also in Bonham.

Supplying handmade items for members of the military and veterans isn’t anything new. The Production Corps of the Red Cross came into being as a response to World War I and Spanish Influenza. One of the most popular volunteer units in Red Cross history, they manufactured millions of surgical dressings and articles of clothing for soldiers, veterans and refugees during its years of operation. They also made gauze face coverings to prevent the spread of influenza.

Their dedication continued throughout the twentieth century. Bauer has a pattern book from World War II that production room members would use to make items to send to soldiers serving overseas. Bauer and her team carry on the work that began over 100 years ago.

In the Dallas office, a sewing room is slowly taking shape where volunteers can gather and craft. It will eventually house Red Cross memorabilia from the Production Corps throughout its history. Bauer is especially excited to have one item on display in the room.

“One of the things that is hopefully going up on the wall, now that we’re finding kind of a permanent place, is a poster painted in 1918 by an artist promoting the call to help the soldier,” Bauer says. “It shows a woman knitting socks. It’s a lovely poster.”

The work of the production rooms isn’t limited to making items for soldiers and veterans, though. After the Second World War, their functionality and efforts broadened to help local communities in need. Still, their roots are in serving the men and women of the armed forces.

Through their ongoing efforts, the North Texas production room continues to support service members and veterans throughout the region. Even though they don’t meet the people they are helping, Bauer says that she and her sewers know they are making a difference.

“We don’t ever see the people that get what we make,” Bauer says. “But we know that we’re providing comfort for those people just by the words that come back to us in thanks from the hospitals. We know that they get used.”