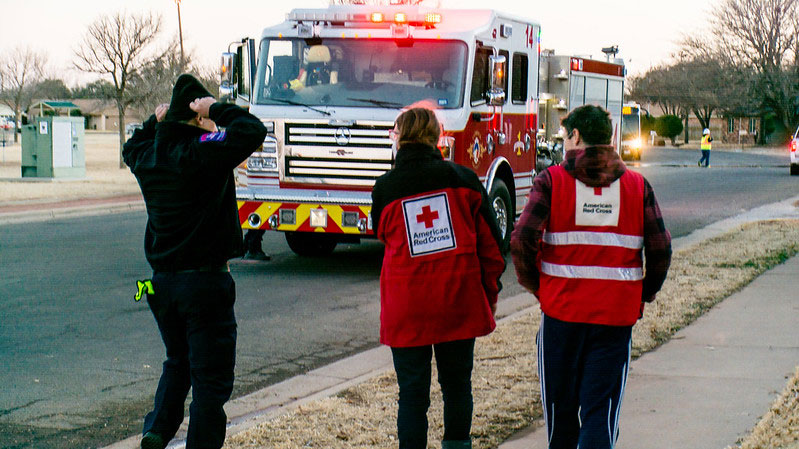 It was just 5:30 a.m. on July 6, when residents at the San Angelo Senior Living Apartments were woken and evacuated for their apartments. The fire department was on site taking care of the fire that would impact more than 70 units and their residents.

When Tammy Davis, a disaster program manager with the American Red Cross arrived on scene and received the update that there had been no casualties, she was relieved. Beating her to the site were the volunteers on duty to respond that night, including the members of the Disaster Response Team. They were already assisting residents affected by the fire.

The Disaster Response Team arrived within 30 minutes of the fire starting. They immediately begin accessing how the Red Cross would help on that early morning

"It was amazing, actually, how it all turned out," said Davis.

"No one ever takes care of people the way these people did, the managers of the apartment," said Davis.

As the smoke settled both figuratively and literally, the Red Cross only one, 80-year-old cancer patient needed additional services. She was given immediate assistance, including a comfort kit, a wig, donated by a volunteer organization that same evening, and toiletries These volunteer organizations are active disaster partners with the Red Cross, and provide clothes, furniture, transportation and even wigs, among many other things, to help those in need get back on their feet and on the road to recovery.

Each disaster and even fire is unique in how it impacts the residents. The needs vary with some people needing more assistance than others. In disasters involving fires, the Red Cross provides immediate assistance by opening cases for each family. Each person's needs are assessed to see how best the Red Cross can provide help. It can be as simple as replacing glasses or a prescription. Sometimes people need a place to rest their heads at night, hot meals and cloths as they start to figure out what comes next. The Red Cross case workers work patiently with them over time and point them in the right direction for recovery.

As for the seniors affected by the fire at the San Angelo Living Center fire, they kept their spirits high.

"The people affected were drinking coffee and laughing, carrying on between themselves, they were all happy and not stressed out, very thankful for everyone helping", according to Davis.

Davis says she believes the Red Cross has even gained a few volunteers out of the ordeal thanks to the swift response of the Disaster Action team.

"My team got there so fast, and they were so helpful for all the residents that were affected,” Davis said. “I truly believe they helped the community members that were there, keeping everything organized and calmer for the people affected."