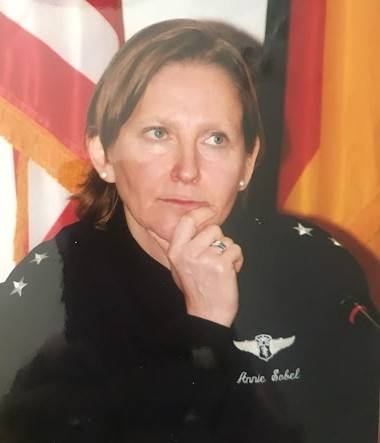 Dr. Annette Sobel is a U.S. military veteran who currently serves as an integral part of the American Red Cross Board of Directors in Lubbock, Texas and is the incoming President of the Board come July 1 for Panhandle Plains Chapter. She is a retired Major General in the Arizona and New Mexico Air National Guards and is a former New Mexico Homeland Security Director.

Dr. Sobel has been working for the American Red Cross for the past four years. She works with fellow Red Cross members to support various military programs and educate civilians about the military.

“Dr. Sobel has been a wonderful addition to our Red Cross Panhandle Plains Board of Directors,” said Kiley Murray, Executive Director of the Red Cross Panhandle Plains Chapter. “She has led an initiative to honor first responders who are our primary partners in the community as well as has truly been invaluable in our Service to Armed Forces department by making connections in our community and state. Her excitement for the Red Cross, paired with her military service history has been a wonderful breath of fresh air.”

With a background in Disaster Medicine, Sobel argues that “medical care isn’t just seeing a doctor”. It goes beyond just the nurses and doctors in hospitals and to the first responders who work to save lives at active disaster sites.

“I’ve learned a lot of self-sufficiency,” she says about her military career. Not only that, it “prepared [her] for any situation.”

Dr. Sobel is an American hero who represents the rise of women in the military. Looking back at her life, Sobel’s incredible 20-year journey through the military ranks began when she joined the ROTC program at Princeton University in 1979. It was her father’s influence that fueled her decision to join.  He had been in the military himself. She was Princeton’s first female military graduate.

After graduate school, Sobel finished her medical residency at Duke University. She then enrolled in the NASA flight surgeon course and completed her residency for Aerospace Medicine at Wright University.

Since she still owed the military some time, she decided to serve it in Fort Bragg, North Carolina, where she ran the medevac unit. While serving, Sobel became the first female company commander at Fort Bragg.

She has also had various faculty appointments in the military. Sobel served as a Hyperbaric Medicine Advisor in the US Navy in 1989  and a military advisor to Defense Advanced Research Projects Agency in the Department of Defense in 2004.

Additionally, Sobel served as the Senior Assistant to the Chief, National Guard Bureau (NGB) and as the Chief’s advisor for civil-military support during the horrific attacks on September 11, 2001. She was also the Director of Intelligence for NGB during the Hurricane Katrina humanitarian response.

During her long career, she moved up the ranks, eventually becoming a two-star general. In an interview with Texas Tech, Sobel reminisced, “When I was promoted to two-star general, our class for generals only had three women general officers. You can imagine how having that type of proportion - we were breaking ground. In terms of women going into the military, a lot more opportunities are available.”

Sobel received many commendations for her achievements during her distinguished career. In 1996, she won the Award for Best Social Sciences Presentation, “Ergonomics in Support of Military Operations”. Towards the end of her time in the military, Sobel received the New Mexico Anti-defamation League Distinguished Public Service Award in 2005 and the NATO Award for Career Service to the Understanding of Weapons of Mass Destruction and Mass Casualty Management.

Sobel retired from the military in 2008. Not one to take retirement sitting down, Sobel served as a guest scientist at Los Alamos National Laboratory from 2008 to 2013. She then went on to teach at Texas Tech University for six years.

At Texas Tech, she was a professor in the Department of Medical Education, and a director of the Global Laboratory for Energy Asset Management and Manufacturing. She also served as the civilian director of Homeland and Security in New Mexico. In 2019 Sobel was awarded the Lubbock YWCA’s Women of Excellence in the Government category.

Dr. Sobel has been a pioneer in many regards throughout her great many accomplishments. While she is no longer on active duty, she continues to serve through her role with the Red Cross. It’s here where she continues to fulfill her passion for duty, helping honor and support members of the military, their families and veterans.

A Time to Give Thanks
Maribel Flores
.type=article.p=1
View All
/content/redcross/en/local/texas/north-texas/about-us/news-and-events/news/west-texas-veteran-doctor--a-leader--difference-maker---trail-bl