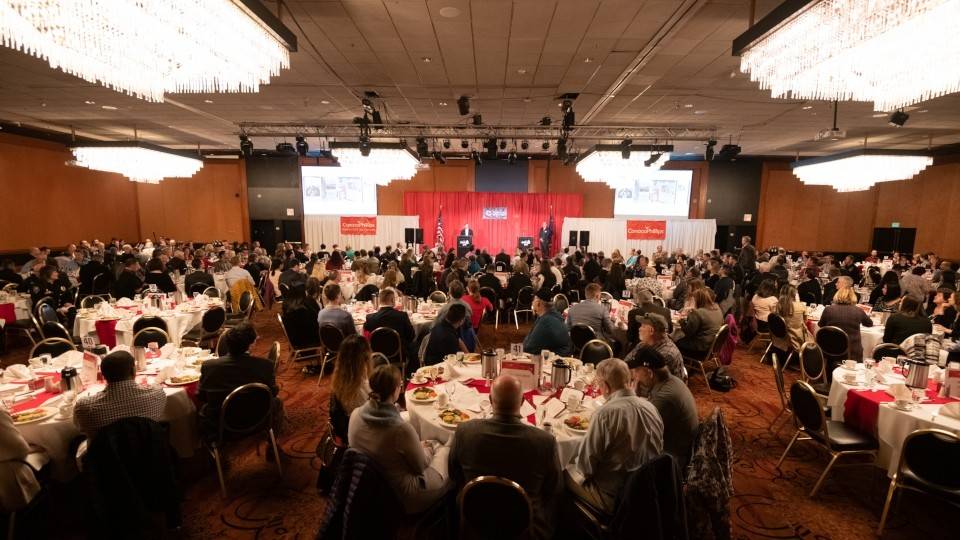 Presented by ConocoPhillips on Tuesday, April 16 at the Hotel Captain Cook Ballroom in Anchorage, Alaska

ANCHORAGE, April 4, 2019 — The American Red Cross of Alaska will honor individuals and organizations for acts of heroism throughout Alaska at the 20th Annual Real Heroes Breakfast, presented by ConocoPhillips.

This inspiring event raises critical funds for the Red Cross of Alaska. The event will take place in the Hotel Captain Cook Ballroom in Anchorage on Tuesday, April 16. Doors open at 6:45 a.m. and the program begins promptly at 7 a.m.

These everyday heroes are nominated each year by fellow Alaskans for exceptional acts of bravery, quick-thinking, selflessness, and skill. “The stories of these heroes showcase crucial moments in time where hope prevailed, compassion triumphed and ordinary citizens acted with resolve,” said Tanguy Libbrecht, Red Cross of Alaska CEO. “It is an honor to recognize these extraordinary Alaskans each year and especially this year, on our 20th anniversary, for their contributions to our communities.”

Close to 500 guests are expected to pay tribute to more than 20 heroes in 10 categories who, in the last year, faced challenging situations and made the selfless decision to help someone in need, or were a part of a program that has improved the overall safety of our state through constantly honing protocols for multi-agency coordination and refining knowledge in order to save as many lives as possible. The ceremony will spotlight each hero’s story and award them with a Red Cross hero medal.

GCI Technician Ryan “RJ” Gallegos was responding to a request to resolve a cable TV issue in early July 2018. RJ does not typically do residential work. As he entered the home, RJ noticed a man lying on the couch in the living room that at first glance, appeared to be sleeping. RJ took a second look and quickly realized that the person was not breathing. RJ is CPR/AED/First Aid certified, and because of this, was able to act quickly and called 911. While speaking with the dispatcher, it became apparent that CPR was required, and RJ quickly started doing chest compressions. After several minutes of performing CPR, EMTs arrived and transported the patient to the hospital. RJ continued with his day by completing a ticket at the next residence on his list.

In late November 2018, two hunters from Savoonga reported themselves as stranded after transiting to the remote Punuk Islands by small boat. Using a VHF-FM handheld radio, the men were able to hail a Ravn Alaska aircraft flying overhead and relayed that they were in distress to pilots Natoshia Burdick and Samuel James. The men reported that their boat motor was inoperative, leaving them with no means of transportation back to a snow machine they’d left on St. Lawrence Island. Ravn Alaska notified the Alaska Rescue Coordination Center, and over a two-day period, resources were deployed to assess the condition of the men, drop survival gear and provide medical assistance.

There is a myriad of search-and-rescue agencies across the state that help save lives on a regular basis, but the Alaska Rescue Coordination Center (RCC) on Joint Base Elmendorf-Richardson acts as the headquarters for centralizing information and communication between other agencies to figure out the best resources to deploy when assistance is needed. The RCC provides a 24-hours a day, seven days a week rescue coordination capability in support of US military and civil aviation search and rescue needs in Alaska. Because Alaska is so vast, and the environment can be so challenging, RCC personnel get a lot of practice carrying out missions, which also means they are constantly honing protocols for multi-agency coordination and refining knowledge in order to save as many lives as possible. The RCC is manned by Alaska Air National Guardsmen and the RCC director reports to 176th Wing leadership. During the last 25 years the RCC has saved about 2,400 lives.

In late April 2018, a massive windstorm with sustained winds of 60 mph and wind gusts recorded over 100 mph rocked Southcentral Alaska.  This windstorm left two people stranded on Powell Glacier and three hunters in a separate party were forced to hunker down in the Alaska Range.  Survival gear for all five individuals had been blown away, leaving them exposed to the harsh and unforgiving Alaska weather. What began as single complex search and rescue mission to aid the hunting party quickly evolved into two complex search and rescue missions in near whiteout conditions as the other stranded party on Powell Glacier stated in their own words, “We will not last through the night.” AFR 471 would have to battle hurricane force winds while attempting to rescue the hunting party and AFR 467 would attempt a high-risk nighttime glacier landing while also battling extremely high winds. The crew of AFR 467 flew nine hours and refueled four times. The world class search and rescue planning by the RCC, combined with the heroic aviation effort of the 210 RQS, ensured that five distressed individuals were rescued from the unforgiving grip of the Alaskan wilderness.

Along the Iditarod trail between the checkpoints of White Mountain and Safety in March 2018, Scott Janssen came upon a fellow musher and friend who had been separated from his sled and dog team and had been unable to move for almost five hours in temperatures as low as 60 degrees below zero. With little concern for his own safety, Janssen worked tirelessly to try and get the musher and his team moving again. After more than two hours, Janssen realized that the musher was in a life-threatening, hypothermic situation and was not going to be able to complete the race on his own. Janssen made the decision to stay with him, call for help and ultimately scratch from the race himself in order to save his fellow musher.

Sponsored by: Petrotechnical Resources of Alaska

In late June 2018, a 21-year-old deaf female was hiking solo along the Crow Pass Trail when she dropped her trekking poles down a long slope. When trying to retrieve her poles, she hit a rock and continued to slide for another 300 feet in the snow, injuring herself. A white husky appeared out of nowhere and the hiker started looking around for its owner. She then noticed “Nanook, Crow Creek Guide Dog” was written on his collar. Nanook stayed with her overnight and they continued along the trail together. While attempting to cross Eagle River the next day, she fell into the waist-deep water. Nanook jumped in, grabbed her backpack and helped her to safety. Once onshore, she realized the severity of the situation and pushed her emergency locator. The troopers airlifted both the girl and Nanook, and mid-flight realized that the dog didn’t actually belong to her, but to owner Scott Swift. Nanook has been traversing the Crow Pass Trail for years and will likely continue to do so for years to come.

Most siblings have a story or two about heated arguments and rough-housing while growing up. Teenage brothers Michael and Tristen Wheatley had an argument they would never forget. On a September afternoon, the Wheatley brothers were home alone, when regular rough-housing turned into a statistically improbable turn of events. Tristen charged Michael, Michael raised his fist and it landed directly in the middle of his brother’s chest. Michael watched as his brother Tristen fell limp onto the floor. Tristen had suffered an extremely rare condition called commotio cordis, or “agitation of the heart.” Michael jumped into action, calling 911 and performing chest compressions on his brother until paramedics arrived. After four shocks with a defibrillator, Tristen started showing signs of life. Michael’s ability to recognize the injury and treat it immediately was the key to his brother’s survival.

In May 2018 near Portage, a woman was Hooligan fishing along Turnagain Arm and came within minutes of drowning after getting stuck up to her knees in the mud. As the tide was quickly rushing in - at a rate of one-inch per minute - the Girdwood Fire Department and two Anchorage Police Department officers arrived on scene and sprang into action. Swimmers with the fire department worked quickly, reaching and freeing the victim within 15 minutes using special equipment designed for this express purpose, as the muddy water reached her shoulders. The Anchorage Police Department assisted the firefighters and the woman was treated for mild hypothermia at the scene.

Daren Beals, a trained volunteer firefighter and EMS captain who works for ConocoPhillips on the North Slope, is no stranger to dangerous and life-threatening situations. This is, in fact, the second time that Beals is being honored as a Red Cross of Alaska Real Hero. This time around, in late May 2018, Beals took the scenic route home with his family and along the way, saw smoke billowing up from a home along the Old Glenn Highway. He knew that something was amiss, and he ran up to the front door, banging loudly to check on the residents. After no answer, Beals went into the home and found the family of six in a back room of the house, enjoying a family movie night, unaware that a fire continued to grow by the minute. Daren was able to get the family out safely, while his girlfriend called 911 for assistance.

Glacier Morrow, a Special Olympics athlete who has Down Syndrome, had just competed in a Special Olympics Bocce Ball tournament in September 2018 and was up late into the evening. Before heading to bed, he luckily went into the kitchen of the home he shared with his mother Jana Griffin, heard some strange sounds and then saw flames running up the wall. In that instant, he knew exactly what he needed to do. He rushed to his mother’s room, woke her up and simultaneously called 911 for assistance. Their home was partially destroyed, in what was actually their second experience with a home fire. In 2004, they also suffered a home fire on the same property, which was a total loss. While their family is safe and sound, their home and treasured belongings, including Morrow’s Special Olympics medals and Denver Broncos gear, were all lost in the fire.