Long-time Volunteer Retires at the age of 92

Long-time Volunteer Retires at the age of 92 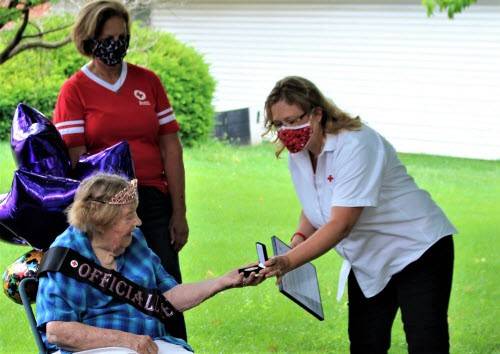 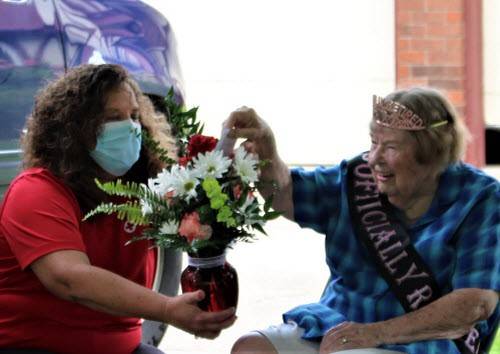 At 72, she fell down a flight of stairs in her new home, broke two arms and got an ugly bruise on her chest.

But that did not stop the intrepid Pat Vickers. Only a few weeks later, she drove from Springfield, MO, to Champaign, Ill., to train Red Cross volunteers in disaster action and recovery.

“I was black and blue, but they were depending on me to teach the course,” Pat explained.  “Anyway, I had friends in Champaign I wanted to see.”

A combination of endless energy and pragmatic resilience, Pat Vickers, now 93, officially “retired” June 9 after 40 years of volunteer service to the American Red Cross. The event prompted more than a bit of fanfare. Under normal circumstances, the retirement of a longtime American Red Cross volunteer would have been celebrated with a big party.

But during this time of social distancing, her friends at the American Red Cross of Missouri and Arkansas knew they'd have to come up with a different way to honor Pat.

On a sunny afternoon in June, Red Cross staff coaxed Pat into her front yard, where she was surprised with a block-long, drive-by parade led by a Red Cross Emergency Response Vehicle and a Springfield, Mo., fire truck. She was presented with flowers, a "happy retirement" crown and the Red Cross Service to the Armed Forces Challenge Coin.

Challenge Coins are awarded for outstanding service and appreciation of excellence in performance of duty and have been a military tradition for nearly a century.  This was one of three honors Pat has earned from the organization—including the Clara Barton Award—one of the Red Cross’ highest awards---for her service in volunteer leadership positions held over a period of years in Rolla, MO, and the Everyday Hero Award for her service to veterans.

It was her great respect for the work of a veteran Red Cross World War II field director that first interested Pat in the Red Cross.  Born in Iowa City, Iowa, Pat grew up with her grandmother and single mom in Harmony, Minn., a town of 800. Her family members had lived there for generations. Pat’s mother had eight siblings who supported the household so her mother could stay home and care for her and her aging grandmother.

During World War II, Pat’s cousin became a Red Cross medical social worker in war-torn Europe and later served as a Red Cross field director in London and Paris. Pat still has her cousin’s many letters about that experience. It was no surprise then that in the late 1960s after 23 years teaching music and raising four children, Pat became a Red Cross volunteer in Rolla, MO. There her husband was an assistant professor at the Missouri School of Science and Technology for four decades.

First, she became a volunteer typist for swimming cards, then she became a board member, interim chapter manager, and health and safety class instructor.  In 1998, when Pat’s husband died, she moved to Springfield to be closer to her children there.

Almost immediately, Pat became a Disaster Duty Officer and Disaster Action Team member.  She routinely went to fires to help those burned out of their homes and was deployed across the United States to help serve as a Financial and Statistical Informational (FSI) team member during disasters. Pat has responded to disasters or taught classes in Arkansas, Illinois, Indiana, Iowa, Kansas, Missouri, Minnesota, Oklahoma, and South Carolina.

Which deployment stands out for her?  “After the terrible floods in Iowa, I was a member of a 12-person team. We spent a month visiting little towns from one end of the state to the other, assessing damage and offering services to flood victims.  I provided back-office support for the team.  At the end of it all, I was far away from the person who drove me to Iowa from Missouri, so my son had to come pick me up!”

More recently, Pat has been involved primarily with the Service to the Armed Forces processing the requests of family members of military personnel to get them home during emergencies. She also supported efforts to provide services to veterans across 29 counties in Missouri. Through face-to-face contact and over the phone, Red Cross teams secure financial assistance to help pay bills and provide other essential resources to destitute veterans. One of the veterans she helped nominated her for the Everyday Hero Award.

Why did she decide to retire at age 93?  “I just decided it was time to leave because I had trained competent people to interview veterans and determine their needs,” she said. “I felt I should get out of their way.”

Not that Pat plans to completely leave the Springfield Red Cross team.  “I told them I would continue to be a duty officer for the Disaster Action Team when they needed someone.”  Pat also plans to continue to serve as a member of the choir and as treasurer/bookkeeper for her church, and she will continue to keep her son’s books for his trucking operation.  Pat also does a fair amount of gardening at her home where she mounts a riding lawn mower to keep things tidy, and she still drives herself to various functions.

But she won’t be ever-present at the Red Cross, bringing her life experience as a teacher, expert on veterans’ needs, Emergency Medical Technician and member of the Disaster Action and Disaster Recovery teams.

“We will miss this very gracious, candid, dedicated and humble volunteer hero. Pat will forever be in our hearts as she has left an ever-lasting legacy at the Red Cross and in her community,” said Jenny Solomon, Disaster Program Specialist at the Red Cross.

Lynn Moxley, MPA | Regional Service to the Armed Forces Program Specialist at the Red Cross, has been impressed with Pat’s depth of knowledge.  “It really has been an honor to learn from her – she has such deep knowledge of the community resources we can offer our struggling veteran and military families,” said Lynn. “Pat exemplifies true humanitarian kindness to everyone.:”

Stacy Burks, Red Cross Executive Director American Red Cross Southern Missouri, agrees: “Pat Vickers is the epitome of the Red Cross. “She has the biggest heart and is one of the most compassionate people I have ever met. If I had to think of one word for Pat, it is would be ‘dedicated.’ Over the years that I have known her, Pat has shown me what it means to be dedicated. There have been days when bad weather hit the area, and most people stayed home, but not Pat. She made sure that she attended meetings no matter the weather, and if the clients chose not to come to the office, Pat went to them. With Pat retiring, there will be a small hole in the heart of the Southern Missouri Red Cross, but she would want each of us to do whatever we could to continue to provide hope and healing to those in need.”

And just like the icing on a retirement cake, Pat received one last kudo, receiving the Together Everyone Achieves More (TEAM) award during the 2020 Volunteer Recognition event. Because of Pat’s leadership, our team is forever better.