Give Now
Home
Local
California
Southern California Region
About Us 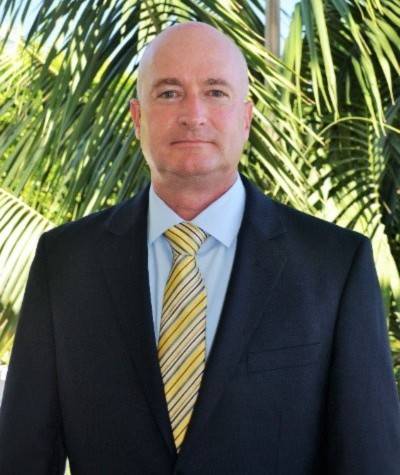 Mahoney brings significant leadership skills to the Red Cross, most recently serving as the Executive Director of zero8hundred, an organization he launched in 2015. An innovative non-profit, zero8hundred assists service members as they transition to civilian life after completing military service.

Mahoney is a veteran himself, having retired at the rank of Captain after 27 years in the United States Coast Guard. His service included shipboard experience and assignments piloting helicopters in Massachusetts, Oregon, California, Texas, and as an exchange officer to the Canadian Forces.

Mahoney also has a background in disaster relief, including direction of hurricane responses while assigned as the Commanding Officer of Air Station Houston. He served as the Director of Governmental and Public Relations for the Coast Guard’s 40-state Atlantic Area, and was then assigned to the Mid-Atlantic region, where he oversaw crisis management across six states and the western Atlantic.

Mahoney has lived in San Diego since 2011. His final assignment in the Coast Guard was as Captain of the Port and Commander of Coast Guard Sector San Diego, where he supervised personnel and assets that completed missions throughout southern California, Arizona, and southern Utah and Nevada.

Sean and his wife Christine have been married for over 30 years. They have two adult daughters. 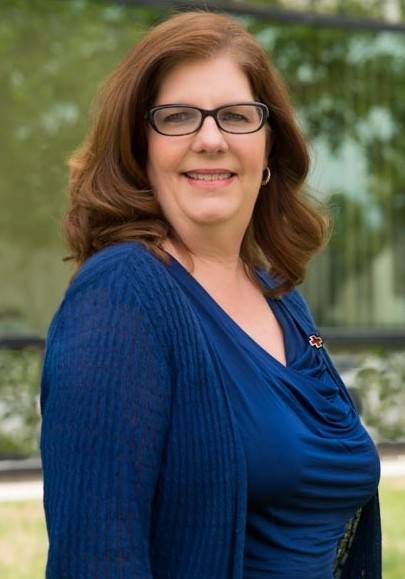 Malinda McDonald serves as Chief Operating Officer (COO) of the American Red Cross Southern California Region, where she oversees the financial operations of the region and the Women, Infants & Children (WIC) program.

Malinda joined the Red Cross in 1999 and was nationally recognized by the American Red Cross with the President’s Award for Employee Excellence for her extraordinary efforts in the professional/technical services area, most notably during the 2003 Cedar Fire. Malinda also played a major role in the finances and accounting of funds raised during the 2007 San Diego Wildfires in which the local Red Cross was given responsibility to oversee $26.5 million allocated for the Relief, Planning and Assistance program that ultimately helped more than 300 San Diegans recover. Additionally, she was acknowledged by the San Diego Business Journal as Chief Financial Officer of the Year in 2009 and received the 2017 Community Service Award.

A native San Diegan, Malinda brings a wealth of experience to the Red Cross, previously working for Community Health Group, KPMG and The Hahn Company. She is a Certified Public Accountant and holds a degree from San Diego State University. 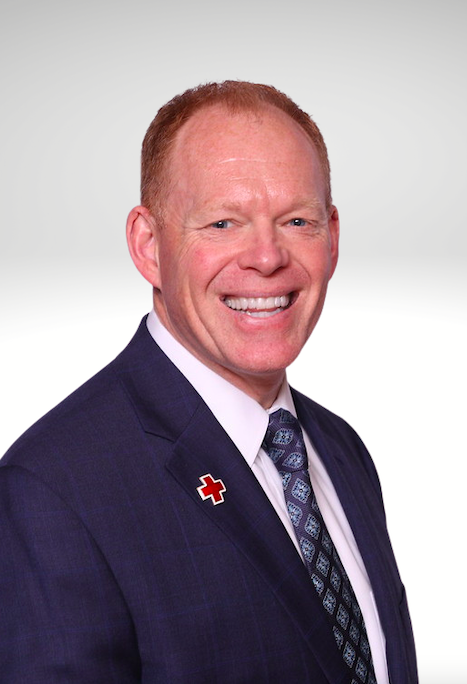 Glenn has over 20 years of experience in nonprofit association and foundation management. As a long-time fundraising executive, Glenn has successfully led the fund development efforts of several national and local nonprofit organizations. Prior to joining the Red Cross, Glenn held positions at the MIND Research Institute, Community Hospital Foundation, American Lung Association and the American Cancer Society.

Glenn holds a master’s degree in Public Health from the University of California Los Angeles, as well as a Bachelor of Arts in Public Relations from San Jose State University. 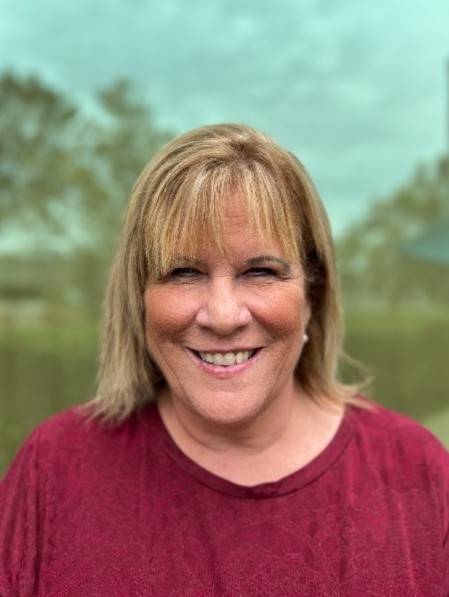 Debbie joined the organization in 1987 and started at the Red Cross as the first full-time Health and Safety staff instructor. Soon after, she was promoted to Associate Director of Corporate Training, eventually becoming the Director of Health, Safety and Preparedness Services. During this time, she led the department in developing programs and services unique to Orange County, including customized disaster preparedness programs, Business Emergency Response Team Training (BERTT), Disaster Recovery Alliance, Disaster Preparedness Academy, Super CPR Day, youth and senior preparedness programs and customized preparedness products.

In 2012, Debbie became the Regional Disaster Officer for the Desert to the Sea Region (now a part of the Southern California Region), playing a vital role in the regionalization of disaster services in Orange, Riverside and San Bernardino Counties. In 2020, she assumed responsibility for disaster programs in San Diego & Imperial Counties to cover the entire Southern California Region. Debbie has also deployed to numerous national disasters. 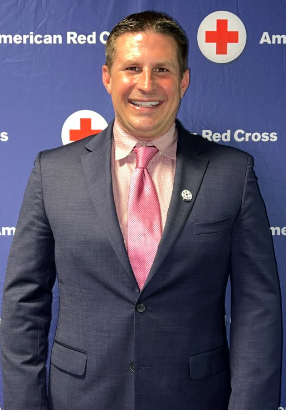 Originally from Arvin, California, Jason graduated from the U.S. Coast Guard Academy in New London, Connecticut, with a Bachelor of Science degree in Leadership and Management. Jason went on to earn a Master of Marine Affairs degree from the University of Rhode Island and a second master’s degree in National Security and Strategic Studies from the U.S. Naval War College. Jason has directed law enforcement and other maritime operations at three Coast Guard Districts and at Sector Jacksonville, Florida. His career included multiple tours in San Diego, California at Naval Coastal Warfare Group-One, Sector San Diego, and the Pacific Tactical Law Enforcement Team. Jason is an Operation Enduring Freedom and Operation Iraqi Freedom veteran, and his awards include the Meritorious Service Medal (2), Coast Guard Commendation Medal with Operational Distinguishing Device (4), Navy Commendation Medal, Korea Defense Service Medal, Iraq Campaign Medal and the Global War on Terrorism Service and Expeditionary medals.

Jason volunteers and serves on the board of directors with the San Diego Foster Angels and the Association of Naval Service Officers (ANSO), a nonprofit organization dedicated to the recruitment and mentoring of Hispanics in the sea services.  Jason is proud of his wonderful family, which includes his wife, Barbie and his twin daughters, Kacey and Blakeley. 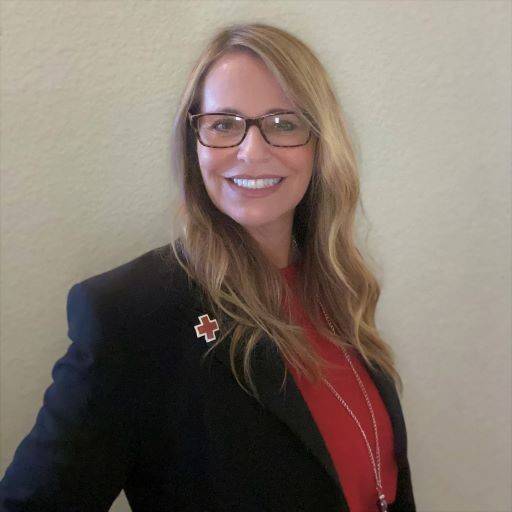 Debbie began her career with the Red Cross in 2013 as a Donor Recruiter for Donor Services, where she recruited blood donors to help meet the needs of hospital patients.

In 2017, Debbie moved into Biomed-Volunteer Services. As a Volunteer Coordinator and Recruiter, she initiated a comprehensive volunteer recruiting and onboarding program by creating a tailored recruitment strategy to bring more volunteers into the organization. At the end of 2019, Debbie was promoted to Supervisor for Biomedical Volunteer Workforce Engagement, overseeing a major portion of the West Coast, including Los Angeles, Southern California and Central California Red Cross regions.

In addition to volunteering for various organizations, Debbie is also a Red Cross volunteer. She has volunteered at Red Cross Sound the Alarm events and has also volunteered as shelter worker during wildfires. She has served on national deployments overseeing Staff Services and Shelter Operations, and has served as a Spanish Interpreter/Liaison. Additionally, Debbie is part of the Latino Resource Group and is a participant of the Mentor/Mentee program, as well as a mentor for the BVWE Leadership Team. Debbie has two teenage sons and three dogs and loves soccer, hiking, boating and dirt bike riding with them all. 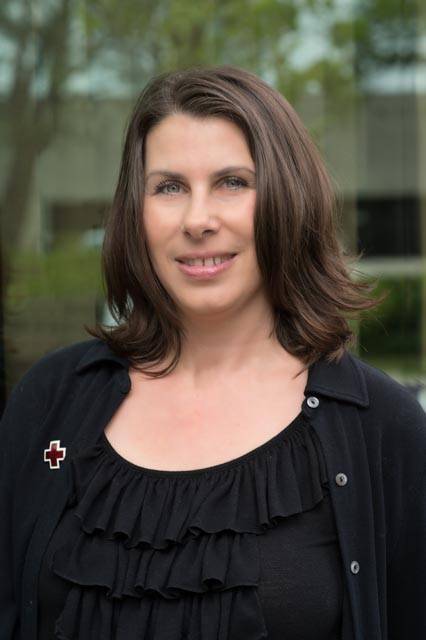 Ann Anderson supports San Diego’s most vulnerable families as Director of the Women, Infants, and Children (WIC) program within the American Red Cross of San Diego/Imperial Counties. Ann is responsible for leading approximately 60 employees, managing 11 WIC sites across San Diego County and overseeing a nearly $6 million budget.American Red Cross WIC serves 20,000 people per month, providing them with nutrition education and breastfeeding support, along with benefits for healthy foods and referrals to valuable community resources. Also at the Red Cross, Ann previously managed the Services to the Armed Forces program before assuming her WIC duties in 2008.Prior to entering the nonprofit sector, Ann worked at Xerox for 17 years including positions in Human Resources, Finance and Operations Management. She received her B.S. in Management from St. John Fisher College in Rochester, N.Y. and earned her M.S. in Executive Leadership from the University of San Diego. 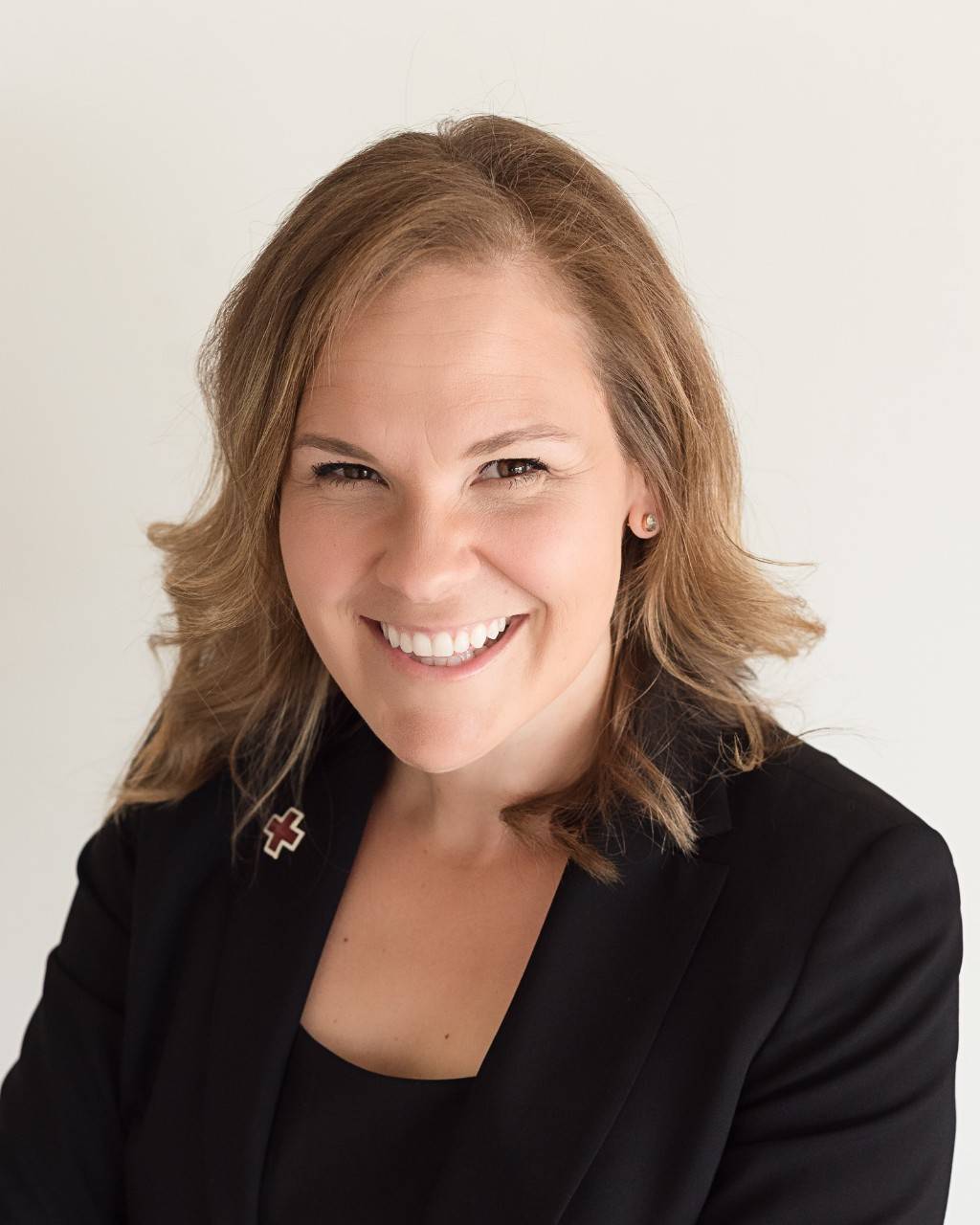 Becky has been with the American Red Cross for over 15 years. She began her career in Biomedical Services as an Account Manager, where she secured community blood drive partners to meet local hospital needs in San Diego. She later became the Donor Resources Development Trainer for Southern California.

Becky received her undergraduate degree in Communication from the University of California, San Diego. 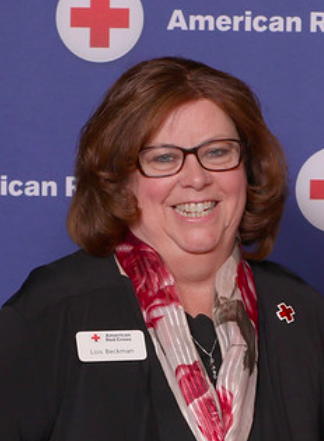 Lois Beckman began her American Red Cross career as the Riverside Chapter’s Development Officer and became the Executive Director in 2012.

Lois’ accomplishments include raising over $10 million and cultivating a national partnership with Circle K Stores which operates an in-store giving campaign that generates approximately $2 million annually. 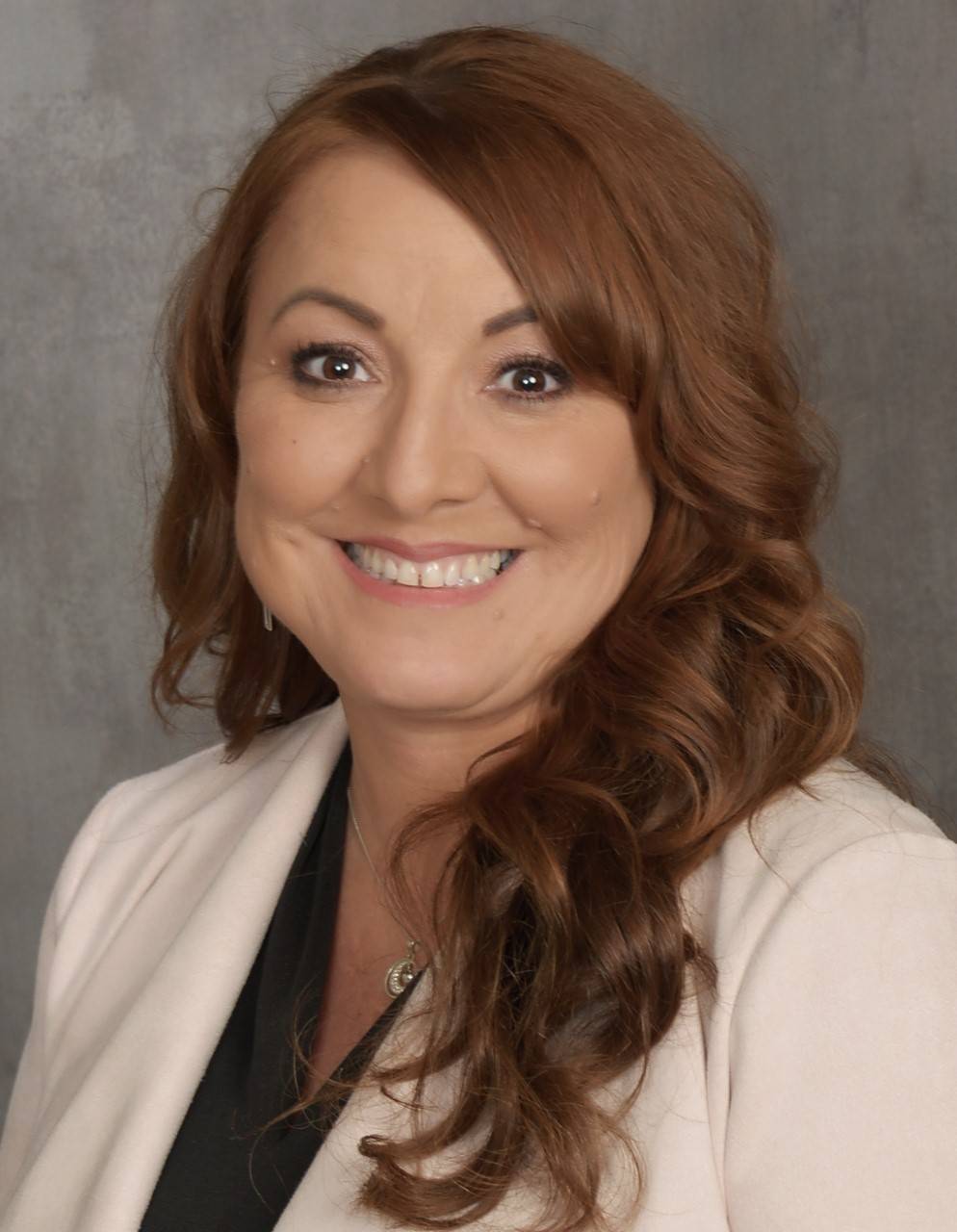 Yevette Baysinger began her American Red Cross career in 2003 as Director of Fund Development for the San Bernardino Chapter and became the Executive Director in 2012.

Yevette successfully built and maintains key relationships with donors and community partners throughout the Inland Empire. She is responsible for establishing and growing several important partnerships, most significantly one with the San Manuel Band of Mission Indians, who has supported the Red Cross mission at the local, national and international levels.

Prior to joining the Red Cross, Yevette was the Foundation Director for Parkview Community Hospital in Riverside, where she was responsible for community and government relations. Yevette is committed to being a life-long learner and has an MBA from CSU San Bernardino.