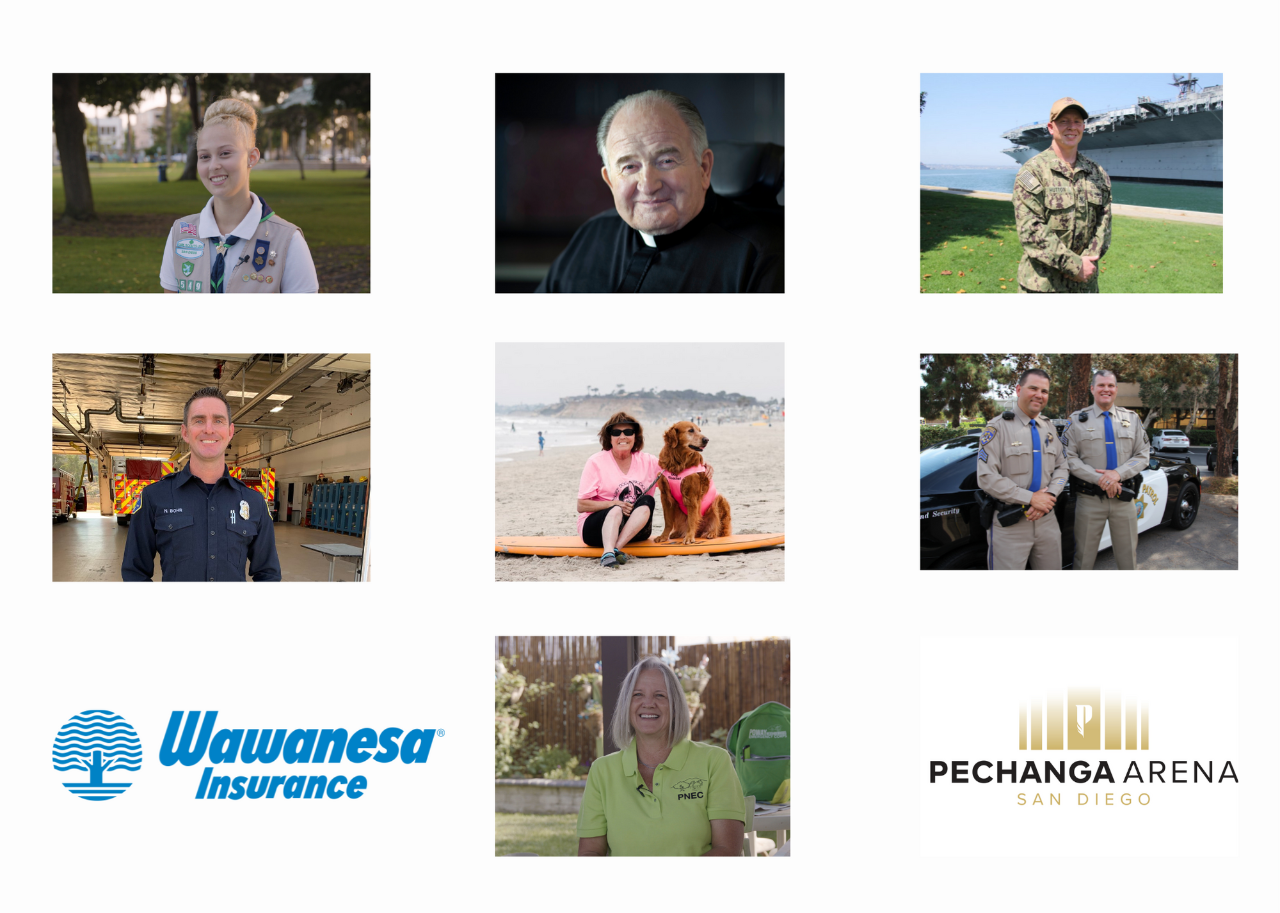 SAN DIEGO – September 22, 2021 – The American Red Cross of San Diego and Imperial Counties is pleased to announce the local heroes that will be honored at its 19th Annual Real Heroes Awards on Friday, October 1, from 9 –10 a.m. The event will be held virtually online and can be streamed by the public at SDRealHeroes.givesmart.com.

The popular event recognizes individuals and organizations that embody the mission and spirit of the Red Cross by saving lives and creating safer, stronger and more resilient communities.

“We are excited to recognize ordinary people, organizations, and an animal welfare hero that demonstrate extraordinary courage from San Diego and Imperial Counties,” said Sean Mahoney, Regional CEO of the American Red Cross Southern California Region. “Each Real Hero being celebrated has their own incredible story, and we know that everyone who watches this year’s event will be inspired by their hope and heroism.”

This year’s Real Heroes Awards is generously sponsored by Hometown Hero sponsors San Diego Gas & Electric and PAR Western Line Contractors, co-presenting sponsors San Diego State University, Sycuan Casino Resort and U.S. Bank along with numerous other sponsors at the regional, community and neighborhood levels. Thanks to the generosity of event sponsor Falck, donations made on the Real Heroes Awards Give Smart website will be matched, dollar for dollar up to $7,500, in support of Red Cross Disaster Relief.

Spirit of Hope Award: In Memory of Father Joe Carroll

Father Joe Carroll dedicated his life to ending homelessness. His efforts on behalf of people experiencing poverty in San Diego are truly legendary. As an icon of the Southern California region and beyond, Father Joe Carroll selflessly and tirelessly served our community for more than three decades. Although he retired from Father Joe’s Villages in 2011, as President Emeritus, Father Joe continued to lend a hand in our community with charm and with deep care and compassion for our neighbors in need.

Ricochet the golden retriever is a certified therapy dog, and first-ever canine assisted surf therapy dog. Ricochet and her owner Judy Fridono are on a mission to empower veterans to gain confidence in the water and in social situations. What makes Ricochet extraordinary is her powerful ability to make immediate, deep, heart-to-heart connections with the individuals she interacts with.

California Highway Patrol Officers Sgt. Kris Holm and Sgt. Brent Lowry were able to get the mayday out on the radio seconds before a Tesla vehicle drove through an emergency scene, creating an Incident Within an Incident (IWI). There were eight San Diego Fire-Rescue personnel working a wrong-way driver fatality incident, with extended extrication time. No first responders were injured, thanks to these two sergeants and their quick and heroic actions.

Terri Sorensen is the President of the all-volunteer run group, Poway Neighborhood Emergency Corps (PNEC). Following the wildfires in 2007, PNEC was formed and has provided community disaster preparedness meetings, held an annual Emergency Survival Fair, responded to emergencies in the community, and more. PNEC is committed to disaster preparedness, response and recovery. Terri Sorensen has played an instrumental role in PNEC’s success, including providing care for residents of Poway during the pandemic.

Barona Fire Department Firefighter/Paramedic Nicholas Bohr was off duty and at home with his family when he discovered a vehicle accident outside. The vehicle was on fire, with a partially-trapped critical trauma victim inside. Nicholas recognized the serious nature of the incident and immediately began to help, knowingly placing himself in harm’s way, with no available self-protection equipment. He was able to rescue the victim from the vehicle and delivered emergency patient care until first responders arrived on scene.

In July 2020, U.S. Navy Aviation Boatswain’s Mate Kenneth Hutton was aboard the USS Bonhomme Richard when a major fire broke out. ABH1 Hutton immediately responded and established an evacuation route for Sailors, helped Firefighters set up their trucks on the pier and lead his team in continued response efforts to help extinguish multiple large-scale fires. In the following days, ABH1 Hutton gathered Sailors, created attack teams, conducted safety checks, and more. The USS Bonhomme Richard experienced zero loss of life during the multi-day incident, thanks in part to ABH1 Hutton’s heroic actions and leadership.

Wawanesa Insurance has been a longstanding partner of the Red Cross, supporting disaster preparedness and response, sponsoring events and helping to fund an emergency response vehicle. This past year, they stepped up their commitment to the Red Cross mission by donating $40,000, to cover the cost of thousands of smoke alarms that will be installed in at-risk homes across our community. Wawanesa Insurance has also been a steadfast supporter of Red Cross wildfire relief efforts which makes pre-positioning relief supplies and responding to these disasters that much more efficient and impactful.

Nevaeh Henrich was spending the afternoon with her best friend when Mrs. Rogers, her best friend’s mother, rushed into the room choking. Nevaeh immediately took control, called 911 and attempted to administer the Heimlich maneuver with her friend. She also called the younger brother to assist and ran out to the street to flag down first responders. Nevaeh then travelled to the hospital with her friend, who was extremely shaken, and stayed with her to provide comfort and support until her best friend’s father arrived.

For more information about this year’s event, or to watch the live-stream on Friday, October 1, visit SDRealHeroes.givesmart.com. Join the conversation online using #SDICRealHeroes.